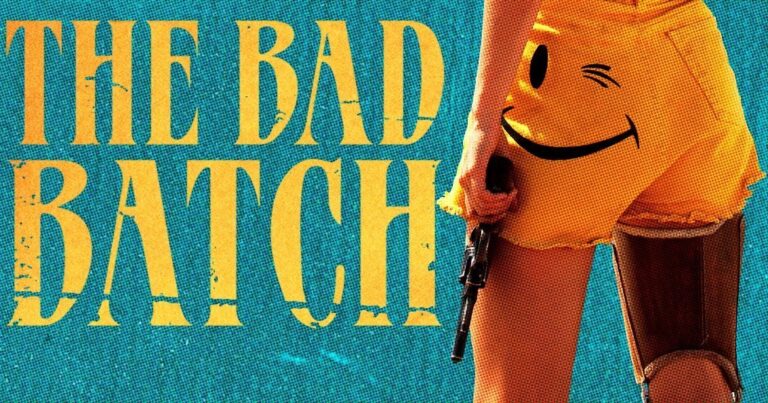 The Bad Batch, written and directed by Ana Lily Amirpour (A Girl Walks Home Alone at Night), isn’t your typical dystopian genre film. In fact, it’s really hard to pigeonhole the film into any one specific genre due to its fluid and constantly shifting nature.

With a somewhat grindhouse vibe, The Bad Batch stars relative newcomer Suki Waterhouse as Arlen, the newest addition to the Bad Batch – people who are members of this near future society that are deemed criminals and unworthy to live with the common folk. They are sent to a fenced-off Texas wasteland where they are left to survive on almost nothing. Arlen finds these wastelands very inhospitable when she’s immediately kidnapped by a group of cannibals and their enigmatic leader (Jason Momoa).

Arlen manages to escape, but not without the loss of two limbs, and then staggers dehydrated and delusional into the desert. As fortune would have it, an aimless vagabond played by an unrecognizable Jim Carrey happens across Arlen and brings her to the refugee town of Comfort. After a few months of healing, a broken and haunted Arlen walks around dazed until she decides it’s time to take her revenge.

As she departs Comfort, a chance encounter in the desert on her way to the cannibal village puts her on a collision course with their boss, all the while the leader of Comfort (Keanu Reeves) has his eyes set on the one thing the cannibal commander truly cares about.

Amirpour’s second outing survives on pure atmosphere and cinematography alone, rather than providing heavy dialogue or any real background to the characters and events. The film doesn’t insult the audience and refreshingly allows them to fill in the blanks. The story may sound like a cannibals vs. townsfolk dystopian flick, but it absolutely is not. The cannibal scenes in the early part of the film are indeed nerve-wrecking and terrifying, but the film moves on from that and so does the tone. Nothing in The Bad Batch is black and white, including the characters and settings.

The cast does a whole lot with very little to work with, namely Momoa, who returns to his silent and charismatic strong suit – he conveys a lot of emotion with just a look or his posture. Waterhouse is also quite good in the lead role and really sells the lost soul of Arlen, although her fake southern accent (she’s British) gets a bit much at times. Reeves on the other hand is given more to say and with his creepy mustache and bathrobe, he’s never been more unsettling – in a good way.

Unfortunately The Bad Batch never really explores enough of the world to satisfy the rich ideas and visuals presented and instead ends up sticking to a very restrained story about the nature of family as well as good and evil – it feels like a very good pilot for TV series, not a complete film. Characters like Giovanni Ribisi as Comfort’s resident crazy person are a complete waste of the actors’ talents and literally go nowhere. Other aspects of the film, such as the cannibal camp populated by scantily clad weight-lifting muscle heads, were bizarre and hilarious. How could an audience not want to more about what the hell is going on there?

Throw in an odd drug trip through the desert night, a rave in Comfort hosted by Keanu and the occasional bloody death and The Bad Batch certainly provides one diverse and unique experience. It’s a shame that the film didn’t have somewhere more interesting to end up, but hopefully the third time is the charm for the obviously talented Amirpour.

The Bad Batch hits theaters nationwide and On Demand June 23.