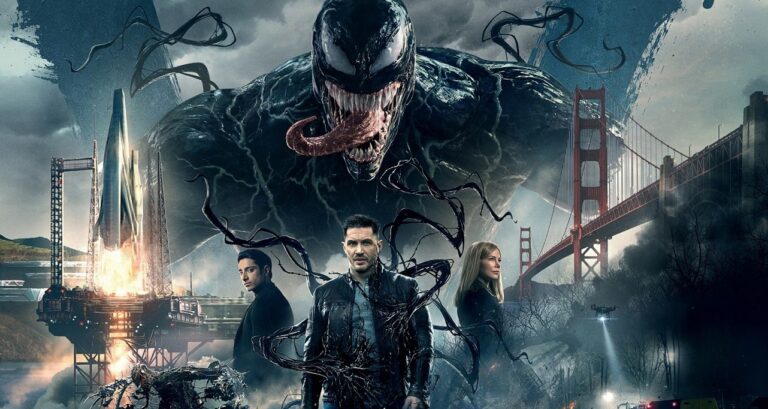 Arguably Spider-Man’s most popular foe, Venom did not have such a good start last time he was on the big screen with his debut in Sam Raimi’s Spider-Man 3. Longtime fans were heartbroken by the poor portrayal of the black living suit monster and even worse, it created a stigma with non-comic fans that the character sucked.

All these years later, with Marvel finally in the midst of a successful revival of Spider-Man himself, Sony has decided to finally cash in on their rights to the characters within the Spider-Man catalog with a solo flick starring Tom Hardy as the man and symbiote Venom. The film has certainly generated a pre-release buzz of excitement and negativity among fans and moviegoers alike, and after having seen the final film, that is exactly what this Venom delivers.

This version presents Eddie Brock as a hard-hitting guerilla journalist that is well-respected, but hard to control. Brock is assigned to do a softball interview with Carlton Drake (Riz Ahmed), an Elon Musk-type entrepreneur. Unbeknownst to Brock, Drake has just made the discovery of a lifetime after one of his spacecrafts returns with a group of parasitic lifeforms that they dub “symbiotes” which can only bond to specific hosts. Brock is eventually exposed to one and they bond in ways that none of Dalton’s test subjects had ever achieved, thus creating a new being calling itself Venom.

Venom as a film is just as messy and sloppy as many have feared, with weird character moments throughout, and frequently accented by horrible dialogue. But a funny thing happens about an hour into the film after an excruciatingly bland and predictable intro: when the symbiote and Eddie Brock finally merge the movie gets surprisingly fun.

Hardy suddenly comes to life as he comically begins to communicate and establish a survival relationship with the symbiote. What started out as a boring performance becomes a weird almost buddy cop sort of film as the symbiote and Brock struggle to figure out how to help each other. The story continues to leap all over the place in quality and Riz Ahmed can’t bring to life the one-dimensional Drake as the villain to Venom’s anti-hero.

Additionally, almost much every side character, such as Drake’s lead scientist Dr. Skirth (Jenny Slate) are a complete waste of talent and time. Michelle Williams doesn’t take herself too seriously as the love interest, and gets to be a bit more integral to the plot in the final act, but is also ultimately forgettable.

While the design of Venom himself is missing the classic white spider on his chest, due to his origin with Spidey not being included in this story, the long-tongued behemoth still looks pretty darn good in this incarnation. Unfortunately, the overall CG effects look surprisingly cheap, and at times are even hard to visually follow because they get too busy and the camera shots just don’t track the action well. The more practical action sequences, like the motorcycle chase through the streets of San Francisco, are a blast and much better choreographed with minimal use of CG.

It’s clear that this film went through heavy cuts in the editing process, and Hardy himself has confirmed that while doing press for the movie. Essentially Venom isn’t the home run Sony was hoping for and it certainly isn’t the film longtime fans have been craving, but the good news is that Hardy is really fun in the role, and a mid-credits teaser sets up a sequel that would be hard for fans to pass up.