Movie Review: ‘What Happened to Monday?’ 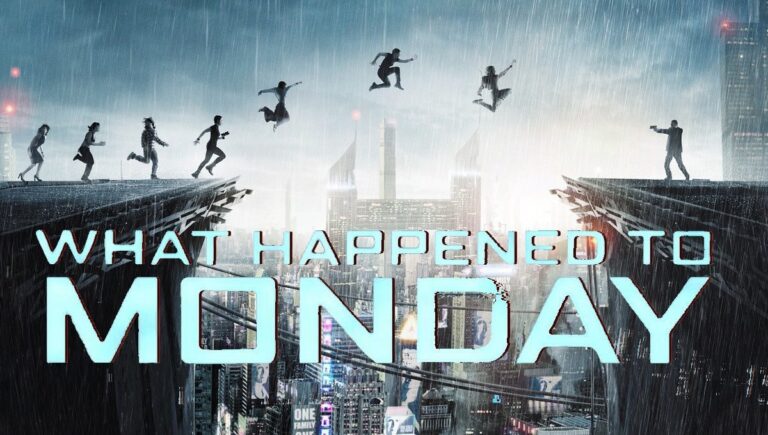 Netflix continues to be the place for some of the best TV anywhere, but has yet to really find their groove in the movie game. The streaming service takes a step in the right direction with their exclusive US release of What Happened to Monday? on August 18 – previously titled Seven Sisters in European markets.

The sci-fi actioner starring Noomi Rapace (Promotheus) had an interesting journey to its release this week (which you can read about in our interview with director Tommy Wirkola here) and is great fun to watch in the comfort of your home. What Happened to Monday? has the cast, production values, and overall feel of a flick you’d have to travel to your local cinema to check out.

In the not so distant future humanity is facing a crisis of over population and a serious lack of food. In order to combat starvation, genetic enhancements are made to engineer food on a massive scale, but unforeseen side effects create an increase in twins, triplets and multiple births along with unfortunate defects, causing the government to establish the Child Allocation Bureau to aggressively enforce their new law of one child per family.

Rapace stars as seven identical twin sisters, living in secret and raised by their grandfather (Willem Dafoe) after their mother died in childbirth. The sisters have to share one identity and only leave their home on their corresponding day of the week. But when Monday, normally very punctual, doesn’t return by their for the designated daily briefing, the sisters begin to think their cover may be blown.

Although there are no clones, the premise can’t help but be compared to fan favorite BBC America show Orphan Black and much like Tatiana Maslany, Rapace absolutely has the chops to pull off the multiple characters. But really the similarities end there, because this film is an unforgiving and surprisingly brutal action flick.

Rapace takes a beating in this film and kicks some serious ass throughout, both metaphorically and physically. Each sister is a fully realized character and when the first full-fledged fight scene happens it is very cool to see how each sister reacts differently to the conflict and how they choose to battle back.

What Happened to Monday? also has some true heavyweight veteran actors in the supporting cast with Willem Dafoe and Glenn Close. Dafoe is terrific as the loving, yet will stop at nothing grandfather to the sisters that will go to some truly terrible places to protect them. The actor is tender with the young actress in his flashback-only scenes, yet still stern and scary when he needs it.

Glenn Close also stars as Nicolette Cayman, the director of the Child Allocation Bureau with her own dark secret she is trying protect. The legendary actress isn’t given a whole lot to do other than menacingly track the sisters while charming the public, but she is able to flex her considerable acting skills in the climax of the film.

While the film is a pleasant blast of well choreographed, intense action, not everything is perfect. There are plenty of unintentionally silly moments like the naming of the sisters and the heady sci-fi themes and backdrops are nothing more than window dressing and never get thoroughly explored.

The film could have also used to spend a little more time with the actual sisters as a unit and shown the audience more of how they were raised. What Happened to Monday? gives you just barely enough to feel in touch with the characters before shit hits the fan, but with just a little bit more investment, what happens next would have had an even more emotional impact.

Rapace earns her stripes here and then some as an action star, and her veteran supporting cast gives this film what it needs for legitimacy. What Happened to Monday? is a great added benefit for having Netflix and is the perfect example of a film that is the right level of entertainment and production value to stream rather than spend an expensive night out at the theater.

Netflix has a solid addition to their exclusive lineup with this far from perfect, but surprisingly visceral sci-fi action film. Rapace is terrific and Dafoe and Close in the supporting cast help add to the film's legitimacy.