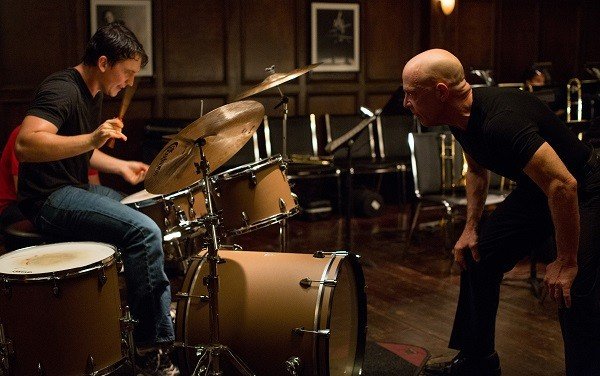 Whiplash has the good fortune of not only having a tremendously appropriate title that works on many levels, but also stars two actors at the perfect time in their careers to tackle these leading roles. This is a story that many times dares you to believe (incorrectly) that it’s your typical musical-prodigy film about revered instructor Terence Fletcher (J.K. Simmons) at the prestigious (but fictional) Schaffer Academy in New York and his unwavering desire to help his students realize their ultimate potential. Andrew Neyman (Miles Teller) is a young drummer attending the school that catches the eye of Fletcher for his undying dedication to the work it takes to become one of the greats.

This may sound very much like every clichéd inspirational film that has come before, but believe me when I say that Whiplash is anything but. Fletcher is a tyrant over his classroom, and instructional time plays out more like scenes from Full Metal Jacket than Dead Poets Society. He is a perfectionist General, not unlike the legendary basketball coach Bobby Knight, that will absolutely resort to psychological and gleeful physical abuse to try and coax what he wants from his students.

J.K. Simmons may just have put in one of his best performances to date in a role that is perfectly suited for his strengths and allows him to really stretch his limits. He’s long been a master of flinging a vast wealth of colorful expletives in creative fashion with his past roles, and in this film there’s not a tinge of restraint as he unleashes hell on his students, none more so than Neyman.

Miles Teller’s performance can certainly not be overlooked either, and everything he does is superb, from his obviously real mastery of using a drum kit to his impressively reserved performance that is always just below the boiling the point. Neyman would give anything to leave behind a normal, happy life to be remembered as one of the jazz greats, and somewhere inside believes he has to suffer to do it. So he creates a vicious cycle of abuse with Fletcher that drives him to his physical limits to become better and better. Together, their mind games play out to shocking results that spiral more and more out of control as the film rolls on.

This means sacrificing relationships, like the one that started with Nicole (Michelle Benoist) just as Fletcher took notice of his talents, as well as distancing himself from his family, led by his supportive and loving father (played with wonderful fatherly charm by Paul Reiser). The further Neyman gets down the rabbit hole, the more things escalate to scene after scene of nerve-wracking suspense.

Writer/Director Damien Chazelle has made a huge statement with this film, and is now a must-watch career for Hollywood. His impressive direction of all the musical scenes accentuated with subtle cuts at the absolute best time is the perfect example of doing just enough to help a scene by not giving too much or too little with the shot. What he does both on script and on screen for the climax of the film is an absolutely brilliant moment in cinema, and should easily go down as one of the best, if not the best, of the year.

The two leads turn in career defining performances with the perfect mix of chemistry and psychosis in their musical mind games. The film will no doubt end up on many critical Top 10 lists for 2014, and is a definite “must see.” Whiplash is a fantastic film that should “wow” both music and film fans with its intense, surprising tale of the search for greatness and the means some will go to find it.