Movie Review: ‘Birdman (or The Unexpected Virtue of Ignorance)’ 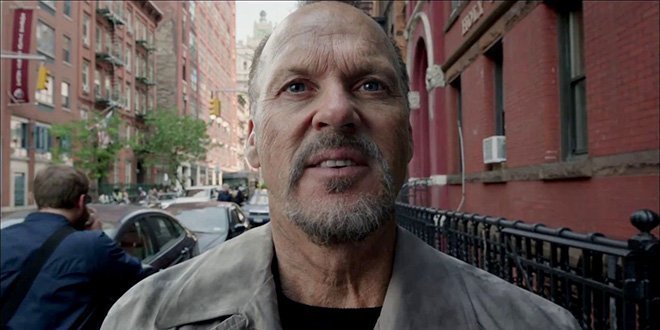 Some 20 years ago, Riggan Thomson (Michael Keaton) was the hottest actor in the world as star of the Birdman franchise, a series of films about a costumed superhero that set the box office on fire before Riggan’s attempts to branch out into more creatively fulfilling roles resulted in the steady decline of his career. If this sounds awfully close to Keaton’s real-life experience as the first big-screen Batman, don’t worry – that’s just one of the many art-imitating-life moments in Alejandro González Iñárritu’s fifth feature, Birdman (or The Unexpected Virtue of Ignorance).

The film opens on Riggan meditating in a dressing room at Broadway’s St. James Theater, where he’s currently trying to mount a production of Robert Carver’s What We Talk About When We Talk About Love. The short story may not seem ripe for a stage version, but Riggan has written the adaptation himself, taking great liberties with the source material and casting himself in a dual role, in addition to directing and producing. It’s a vanity project, to be sure, but Riggan is spurred ever onward by his fast-talking, exhaustingly agreeable attorney (Zach Galifianakis, with no hint of his usual schtick).

When a freak accident forces him to replace a key actor just a few days before the play opens, Riggan jumps at the chance to hire stage veteran Mike Shiner (Edward Norton), the boyfriend of his leading lady (Naomi Watts) and a hugely recognizable Broadway name. But Riggan is ill-prepared for Mike’s eccentricities, which include getting drunk onstage and fighting with his lover during a dress rehearsal – both times in front of a live audience.

Things aren’t much better behind the scenes, as Riggan’s personal assistant (Emma Stone) – who also happens to be his daughter, recently discharged from rehab – is proving wildly inept at nearly every task assigned to her, and responds to criticize with venomous tirades about her father’s ever-growing irrelevance. Oh, and there’s also Riggan’s girlfriend (Andrea Riseborough), another actress in the production who picks a very inopportune moment to reveal some life-changing news.

An incredibly entertaining and darkly comic look at one man’s descent into madness and chaos, Birdman also boasts an impressive editing technique that reveals almost no visible cuts. Despite the fact that the film takes place over the course of several days, it’s constructed in such a way that it seems to take place in a single extended take. Indeed, reports from the set indicate that Keaton and the rest of the cast were forced to learn up to 15 pages of dialogue at once, while also ensuring that their actions and motions were precisely choreographed in order to maintain the illusion.

It’s a marvelous feat, raising the bar and cementing Emmanuel Lubezki as one of the most talented cinematographers in the industry, and his buzzed-about 13-minute opening shot in last year’s Gravity pales in comparison to the work he does here. The always-moving camera is integral to the film’s tone, and carries just as much weight as the performances from the cast, all of whom are firing on all cylinders. In his best role since Fight Club, Norton is obviously having a blast as the bad boy of Broadway, but manages to dial back the absurdity here and there to reveal some surprising depth. This is most evident during a couple of poignant rooftop scenes with Stone, who also provides a near-perfect portrayal of a young woman masking her insecurities with sardonic wit.

But at its core, this is Keaton’s film, and he throws himself into the role like a man possessed. Whether it’s speed-walking through a crowded Times Square in his underwear or engaging in a nearly nude wrestling match with his co-star, Keaton never shows a single hint of weakness or trepidation. Many of Riggan’s decisions are motivated by vanity, but Keaton has absolutely none, and few Hollywood stars would have the fortitude to tackle this type of role with such undeniable gusto. Anyone that points to Birdman as the best performance of Keaton’s career will find very little argument, and he’s well-deserving of the Oscar buzz that sprouted from the film’s festival debut and has continued to grow ever since.

While I’ve spent the past 600 words heaping considerable praise on Iñárritu’s film, the sad truth is that Birdman will likely prove to be too dark, too bizarre, and too existential for a large portion of the mainstream moviegoing audience. But for those who want more from their cinematic experience than the often-hollow studio tentpoles that this film takes aim at – there are hilarious jabs at the Spider-Man and Transformers franchise, among others – Birdman provides a startlingly and inspiringly original experience, and serves as yet another feather in Iñárritu’s cap.