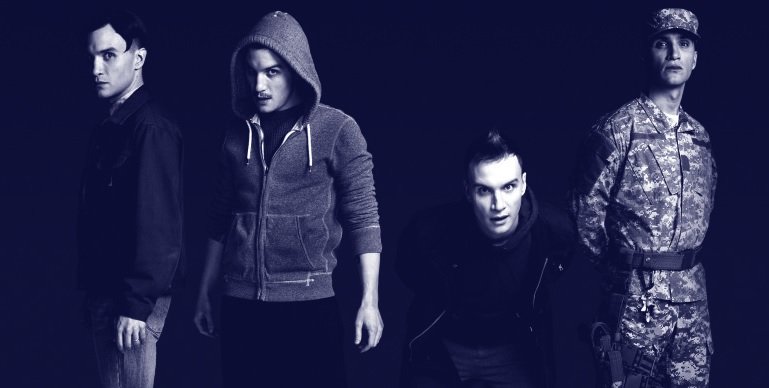 Orphan Black has a new clone on the block and actor Ari Millen is bringing his A-game to menace Tatiana Maslany’s Project Leda clones in Season 3. In a huge Season 2 shocker, it was revealed that Mark the Prolethean was actually a member of Project Castor, a militaristic group of male clones.

With Season 3 poised to a be a breakout year for both the show (due to the AMC acquisition of BBC America) and Project Castor clones, we got a chance to speak with the man behind the brothers on a recent conference call with journalists. Beware of mild Season 2 & 3 spoilers below.

How does being self-aware set your Project Castor clones apart from Tatiana Maslany’s Project Leda clones?

The fact that they’re self-aware means that they grew up together and I guess are a very close-knit wolf pack of a military upbringing. Just like any set of brothers, there’s a real closeness. They like taking the piss out of each other, they can be vicious, but there’s also a lot of love there compared to Project Leda, who are just now learning who they are.

It’s going to be fun as the season progresses. Project Castor is going to hit the ground running as far as making it difficult for Project Leda, because they have something that we want and because we know who we are, we have a certain better understanding. We’re more cohesive, where Project Leda has been not only learning who they are, but they’re also figuring out who they can trust and who they can’t trust. But Project Castor is all on board with themselves, so they are a very strong foe right off the bat.

Will we get an update on Mark and Gracie in Season 3?

Yes, Mark and Gracie have just eloped at the end of last season and they’re trying to make their escape, they’re trying to hide from the Proletheans. And now with this new revelation of Project Castor, we find out that they’re also looking for Mark as well.

Did Tatiana Maslany give you any advice on how to portray these multiple clone characters?

I think she knew, probably a day or two before I did, that it was going to be me. So the first thing that happened when I got to set after I found out – and it was still a secret to the rest of the cast and crew, because we hadn’t got the season finale script yet – she just sort of came up to me and gave me a little rub on the back and winked at me and said congratulations. And that’s I guess kind of how it’s been throughout this season. I mean acting is such a private process and a personal process that it’s never something that you impose on anybody else.

So I mean, for the most part she’s just present, but if I ever had a question about “how do you act with those tennis balls so well,” or whatever you know, she would be there to answer it. But I find for me the best lessons that I can learn are just from watching people who are good at what they do, do it. So that’s what I would do when I was on set and she was on set, I would just sort of watch her do her stuff and see little things that she was doing and say “Oh that’s brilliant. What a great idea!” and I would go on my turn, I would try that little trick and if it worked for me, I would keep it and if it didn’t, I wouldn’t.

Did you have any particular way of getting into character for each clone?

At the end of last season it was more of a reveal, but no one knew who they were at that point – other than [John Fawcett] and [Graeme Mason] knew that they wanted male clones. So we got these wicked visuals of Rudy with the scar and a mohawk and Miller, the military guy, and that’s sort of what I had to sit with during our time off.

So when it came to creating the guys, it was a visual “in” for me. I would put on my wardrobe for the day, I would go to hair and makeup and they would transform me, put that clone on for me that day and then I would look in the mirror and drop into the decisions that I have to make – like okay this guy is like this, and this is what he does. So it was a very visual process for me. And if ever I felt like I was coming out of it I would just sort of go find a mirror and just sort of settle and take a breath and just look and drop back in.

It was a very different process for me than normal. But it still worked. It’s interesting, I had an acting teacher once say whatever works is good, there’s no right answer. If it works it’s good.

John Fawcett and Graeme Mason obviously created the clone characters you play, but did you have any input or put your own personal spin on the looks or personalities of them?

That’s the great thing about this show is there is a real fluidity to the script writing. I mean there’s a lot of frustration with only learning the next episode part way through the episode that you’re shooting, but that also lends itself to things being organic and switching on the fly.

So certainly Graeme and John and the rest of the writers always were happy and interested and inviting for our input. And what I found really cool too is a lot of the times I would come to them with this sort of instinct that I had about it and they’d say, “Don’t worry. We’ve already got you covered in the next episode.” So it was like we were almost on the same wavelength with a lot of stuff. But, no, I think one of the greatest things about the set is that it is a collaboration. There’s not one dictator at the top, it’s a collaborative process.

What’s been the most difficult or perhaps most fun element of filming scenes where you are essentially acting with yourself?

I’ll start with the fun of just being on a show like Orphan Black, you get put in a lot of really crazy and exciting scenarios. So the fact that my screen time got multiplied this season only meant that I was going to get to do more fun and exciting stuff. And now with that came the challenge of acting with myself in a scene, and I guess the challenge was learning how to plan out the scene for both characters at once, because you know the way it’s set up is you shoot the first half of the scene as one character and then you switch over and you do the scene again as the other character.

So the trouble could be, if not handled properly, is if I only paid attention to the first character I was playing and just sort of forgot about the other guy. Then those decisions I made, I would have been stuck with when we flip the camera around. So the bigger challenge this year was especially working with my double [Nick Abraham] and the director. We would just sort of talk it out, plan it and make sure that if it was a scene with Rudy and Seth, and I’m playing Rudy, to make sure Rudy does this at this point, because this is the moment that I want to create for Seth. There was a technical side of pre-planning that wasn’t organic to me. So it was a very interesting learning curve to deal with this season.

Will the Project Castor clones have internal conflicts among themselves?

Yes, they’re brothers, they fight, I mean that’s kind of a generalized way to say it. But certainly Mark has his own ideas of who he wants to be and where he sees himself going. And his brothers and Project Castor are gunning for him. They’re not going to let him go without a fight. So yes, there’s going to be some conflict there, there’s going to be some butting of heads and fights.

But for the most part they’re a cohesive group and they’re all working toward a common goal and even though brothers fight, there’s ultimately love and family and that’s the most important thing.

Which clone is the most intense to play?

I guess the answer is Rudy. What’s really fun about Rudy is that it’s often a game to him to try to push people’s buttons and sort of knock people out of their comfort zone. When we see him with Sarah, and then we’ll see him with some other people where he’s just trying to get under people’s skin and that sort of antagonistic approach, that’s kind of fun to play around with. And along with that [it becomes] a pretty intense scenario. So the answer’s Rudy.

What kind of physical prep did you have to do for the show?

I had to go to the gym every day, I had to look like a military man. It was good motivation to get off the couch, that’s for sure. And other than that I guess, just my diet. It’s amazing what kind of willpower you can have when you’re motivated that way. And unfortunately it doesn’t last, but I was in the best shape of my life for the first little bit.

Which of your clones and Tatiana’s clones get to interact, and which pairing was your favorite?

Well, coming into Orphan Black first off, my favorite clone was Helena and I got to meet her, Mark got to meet her pretty quickly. And I guess it was mostly playing off of Sarah and Helena all second season. So I guess those two are my favorite. But then going into Season 3, I bet you [BBC America] would yell at me if I talked about any more, that would be a spoiler. But I’ve already got to work with my favorite, so I’m lucky.

Will we meet any Project Castor clones with interesting accents like in Project Leda?

I don’t know about that, not yet, but I certainly try my hardest and thankfully we have a dialect coach on set most of the time, but I definitely try to drop my [Canadian-isms], because I think these guys are supposed to be American,  so here are certain words that come across as Canadian, that they kept plugging me to say “Ari, drop it, drop the Canadian.”

You know, that’s a very deep and serious question as far as the subject matter. I mean, I think the writer’s room, what they did with Tony was nothing short of incredible, but that is something that is not mainstream so much yet. So it is something that, if you’re going to do it, you have to do it right and you have to do it the proper justice. So if that ever were something that they would want to tackle with Castor, you know I would really hope that we would do it as best as possible and I could do the most research possible.

But yes, that is not something to throw around as like a gimmick – that’s real stuff. But I think they did a beautiful job with Tony and I think we’ll see if that one is enough for right now.