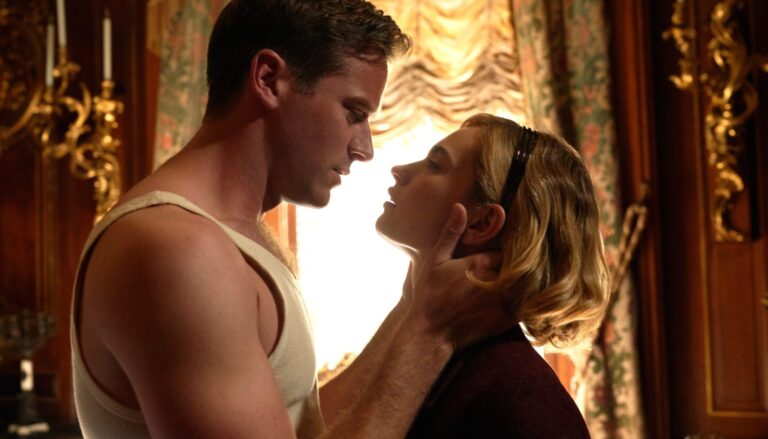 Daphne du Maurier’s 1938 Gothic romance novel Rebecca is no stranger to adaptation: among others, Alfred Hitchcock’s version won the Academy Award for Best Picture in 1940, and Game of Thrones alumni Charles Dance and Diana Rigg starred in a 1997 Masterpiece Theatre miniseries that garnered an Emmy win for Rigg. But the prospect of returning once more to Manderley, the sprawling British estate where much of the story takes place, must have been impossible to resist, and director Ben Wheatley attempts to put his own stamp on Rebecca with this vibrantly colored, beautifully lensed update.

We meet our nameless heroine (Lily James) at a posh Monte Carlo resort, employed as a “lady’s companion” to a crass traveler (Ann Dowd) who belittles and degrades her on a near-constant basis. A chance meeting with handsome widower Maxim de Winter (Armie Hammer) quickly blossoms into something more amorous, and despite the warning signs — Maxim bristles at the mere mention of his late wife and refuses to discuss the circumstances surrounding her death — she’s so enamored with her new beau that in a matter of weeks she’s being swept off her feet and whisked away to the English countryside as the new Mrs. de Winter.

The staff at Manderley doesn’t exactly roll out the red carpet for Maxim’s new bride, nor do they make much effort to hide their reverence for her predecessor, the late Rebecca. “She was the most beautiful creature I ever saw in my life,” remembers the caretaker. But no one — not even Maxim himself — mourns the loss of Rebecca more than the icy Mrs. Danvers (Kristin Scott Thomas), the manor’s stone-faced housekeeper, who maintains an entire wing dedicated to her departed mistress. “She’s still here,” Danvers tells the new Mrs. de Winter. “I wonder what she thinks about you taking her husband and using her name?”

It’s a thinly veiled warning for the psychological torment Maxim’s new wife will be subjected to over the coming weeks, some due to her own ignorance of social norms and lingering insecurity about being accepted by the strange world in which her husband seems so at ease, but much of it engineered by Danvers herself. Orchestrating a run-in with Rebecca’s cousin Jack (Sam Riley) — whose arrival at the estate sends Maxim into a rage, for reasons that will be explained in the film’s second half — Danvers feigns ignorance when confronted by Mrs. de Winter: “I haven’t spoken to him in over a year,” she claims, and that’s just the beginning of her machinations.

Rebecca loses some of its footing during the third act, as the film’s more cerebral elements are sidelined and the mystery surrounding the death of Maxim’s first wife is thrust to the forefront. Viewers familiar only with the Hitchcock version may find events playing out a bit differently here, as there is no Hays Code to influence the narrative, but the screenplay by Jane Goldman, Joe Shrapnel, and Anna Waterhouse rushes through a series of revelations that would have been more effective had they been given a bit more room to breathe.

As it stands, these twists and turns are practically stacked up like dominoes and toppled in rapid succession, lessening their impact and resulting in a climax that feels like it arrives too quickly and ends too soon. Thankfully, the work by an earnest James and a wonderfully sinister Thomas is strong enough to carry Rebecca, even through a finale that’s surprisingly clunky for a film that is otherwise quite competent.