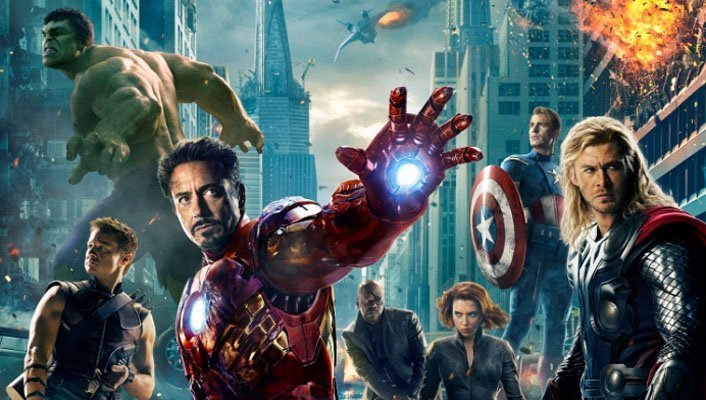 For those viewers unfamiliar with the previous Marvel films, The Avengers goes to great lengths to make itself accessible, especially during a three-way brawl about thirty minutes into the film, featuring Captain America (Chris Evans), Iron Man (Robert Downey Jr), and Thor (Chris Hemsworth). Each of the returning heroes is given an opportunity to showcase their strengths – and weaknesses – and the audience is given a sense of just how volatile this potential coalition could be.

[pullquote_right]The heated verbal exchanges are every bit as riveting as the explosions and fisticuffs.[/pullquote_right]With Stark’s inflated ego, Thor’s stubborn pride, and the Captain’s unwavering sense of duty constantly struggling for superiority, it’s no wonder that brilliant gamma radiation specialist Bruce Banner (Mark Ruffalo) compares the uneasy alliance to a time bomb, especially with Banner himself in a perpetual battle to keep his monstrous, unstoppable alter-ego in check. But all of these problems are dwarfed by the threat of intergalactic war looming on the horizon, led by Thor’s sinister half-brother Loki (Tom Hiddleston).

Joss Whedon’s signature is all over The Avengers, particularly when it comes to dialogue and character interaction, with some of the heated verbal exchanges on the bridge of the Helicarrier being every bit as riveting as the explosions and fisticuffs. At the opposite end of the spectrum, the mutual respect between Stark and Banner, or the story behind the partnership between Black Widow (Scarlett Johansson) and Hawkeye (Jeremy Renner), offer some of the most relatable human moments in the film.

[pullquote_left]The film is littered with scenes and dialogue pulled straight from the pages of the source material.[/pullquote_left]Skeptics can rest comfortably with the knowledge that despite Whedon’s inexperience with big-budget fare, the director has crafted an incredibly exhilarating experience featuring some of the most spectacular action sequences ever filmed. The “wow factor” of each fight is eclipsed by the next as the crescendos into a nearly 40-minute climax featuring enough destruction and mayhem to rival a Michael Bay film – the only difference being that The Avengers has just as much substance as it does style.

Fanboys will likewise have plenty to drool over, as The Avengers is littered with scenes and dialogue pulled straight from the pages of the source material. From Stark’s signature Snark to the Hulk’s appetite for destruction, the film features everything a die-hard Marvel aficionado could possibly ask for, and Ruffalo’s performance as Bruce Banner (as well as his motion-capture work as the Hulk) is worth the price of admission alone.

The Avengers is the type of movie that comic book fans never thought they’d see, a crossover event featuring some of the most recognizable superheroes in the world teaming up for an action-packed thrill ride on a scale so epic, it defies belief. With a clever script, plenty of humor, and more excitement than all of the previous Marvel films combined, the bar for superhero movies has been raised significantly. Your move, Dark Knight Rises.

Nothing personifies defying the odds like superheroes. I know some of you were concerned about this film, especially with things like the early creative team and cast changes that understandably caused geek eyebrows to raise – not to mention Marvel’s four-year plan leading up to this film being audacious and down-right implausible – and yet here we stand. What I’m trying to say is that you can rest easy, true believers: The Avengers defies the seemingly inevitable letdown by being a masterpiece of popcorn cinema that will leave even non-fanboys grinning from ear-to-ear when the end credits roll.

[pullquote_right]A rollercoaster ride that shoots you full of adrenaline and throws you around like a rag doll.[/pullquote_right]Part of the gamble that made this film work was the buildup of that four-year plan. With the heavy lifting of the origins and backstories of each character out of the way, the film wastes no time putting those players on the board and getting into the nitty-gritty of the story. Newcomers can still jump in and not feel lost, but the story is much richer when you know what brought these heroes to this point.

And none of the heroes get short-changed here, despite some predicting the film would just be Tony Stark & The Avengers – although Robert Downey Jr. has plenty of moments that shine. Even with the large cast, the heroes aren’t used just to sell action figures – not even Hawkeye (Jeremy Renner), who had the least prior screen-time going into this one, but has a brilliant script conceit that makes him integral to the early plot of the film. I feared my personal favorite, Captain America (Chris Evans), would be relegated to a lame second-in-command role because of the popularity of Tony Stark, but he was given some great material, and his rivalry with Stark directly changes Tony’s outlook on life (and the outcome of the film).  On top of that, The Hulk? Oh my God, the freakin’ Hulk!! He steals every single scene. Just wait till you see it. Fanboy heaven.

[pullquote_left]Whedon digs deep into the characters by showing what makes them tick and why their personalities clash.[/pullquote_left]One of the biggest surprises of Marvel’s The Avengers was the character of Black Widow (Scarlett Johansson). I found her completely devoid of charisma and serving no real purpose in Iron Man 2, but writer/director Joss Whedon is known for writing strong roles for female characters and he maintains that reputation here by making her the dangerous manipulative spy (that speaks with an accent finally! yay!) from the comics and not the emotionless wooden eye-candy from Iron Man 2.  Johansson takes advantage and finally makes the role her own, much like how Tom Hiddleston takes Loki to whole new level in this film with a brilliantly fun performance reminiscent, strangely enough, of Hannibal Lecter. I’m seriously underselling how good he is but I’ve waxed poetic with my love for this film for a bit too long already.

Fair warning – this movie does start a bit slower than you might expect, which could be off-putting to everyone that has heard the non-stop buzz of how great this film turned out, but be patient, readers. The movie just has a bit of that slow ascent before the rollercoaster drop that shoots you full of adrenaline and throws you around like a rag doll.

[pullquote_right]A masterpiece of popcorn cinema; a lovingly crafted comic-book epic come to life.[/pullquote_right]Marvel’s The Avengers isn’t just a film that finally puts together a group of major superheroes (and the big-name actors who portray them). It’s a lovingly crafted comic-book epic come to life that stays true to its origins in almost every way. Whedon doesn’t just rely on the “cool factor” of having the heroes finally together in the same room, but instead digs deep into the characters by showing what makes them tick and why their personalities clash. By the time you reach the jaw-dropping tracking shot in the breathtaking climax, showcasing each team member working together, you’ll be completely glued to your seat and totally immersed in this colorful raucous summer tentpole extravaganza.