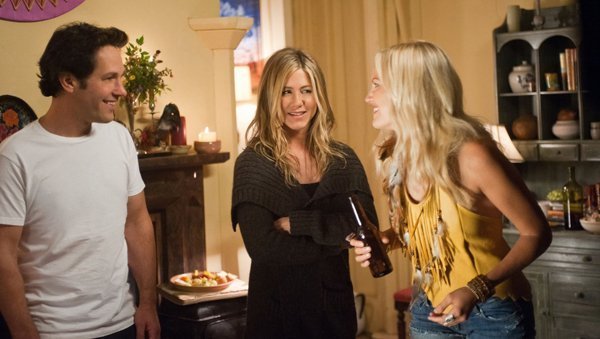 Writer director David Wain (Wet Hot American Summer, Role Models) once again teams up with Paul Rudd to deliver a hilariously offbeat comedy in Wanderlust. Rudd stars as George, an overworked Manhattan business type who has just moved into an incredibly expensive apartment with his wife, Linda (Jennifer Aniston). Unfortunately, tragedy strikes just as they’re finally beginning to settle in – Linda fails to sell her documentary to the executives at HBO, and George finds himself unemployed when the feds swoop in and shut down the company he works for. Unable to afford their big-city lifestyle, they pack up their belongings and head south to live with George’s brother, Rick (Ken Marino).

Along the way, they find themselves at Elysium, an “intentional community” of free spirits where Bluetooth headsets and business meetings are replaced by hallucinogenic drugs and impromptu acoustic jam sessions. George and Linda are captivated by their colorful new acquaintances, and after a bizarre series of circumstances, the Manhattan couple begins settling into a lifestyle they never imagined.

Most of the humor is derived from George and Linda’s interaction with the residents of Elysium, including Wayne (Joe Lo Truglio), a budding novelist (and nudist); Seth (Justin Theroux), the alpha male who has been detached from modern society for entirely too long; Eva (Malin Akerman), the flirty young blonde that wants to teach George all about free love; and Carvin (Alan Alda), the aging, irritable patriarch of the group. There’s also a scene-stealing performance from Michaela Watkins as a bored Atlanta housewife that features some of the film’s most quotable dialogue.

[pullquote_right]A quirky, original film that is unlike any comedy you’ve seen before.[/pullquote_right]While Wanderlust is paced well and contains plenty of hilarious moments, there are a few scenes that could’ve used some tightening up, particularly a lengthy monologue during which George practices his seduction techniques in the mirror. Paul Rudd is an incredibly talented comedic actor, but not talented enough to keep this scene, and the one that follows, from being anything but painfully awkward and embarrassing.

This complaint is minor, however, when you consider how consistently funny Wanderlust manages to be. Wain has knocked it out of the park with this one, delivering a quirky, original film that is unlike any comedy you’ve seen before, and contains more laughs than I’ve had in a long time.