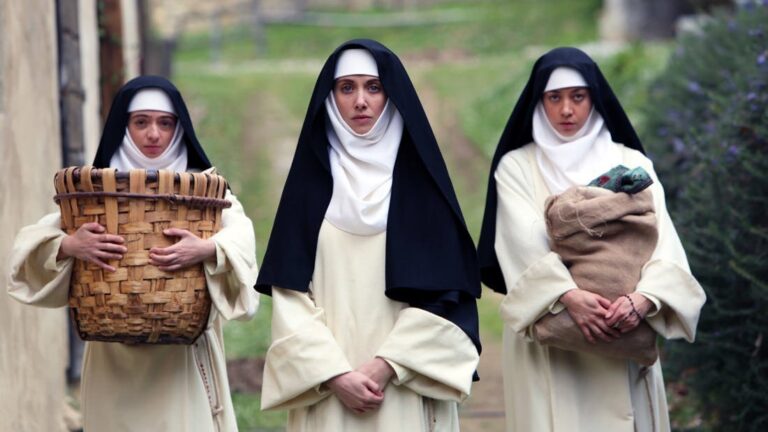 Jeff Baena’s The Little Hours marks the writer-director’s third trip to the Sundance Film Festival, and this 14th-century comedy based – just barely – on Giovanni Boccaccio’s The Decameron, might be his biggest crowd-pleaser yet. Taking place mostly in a convent nestled in the Italian countryside, the film immediately establishes itself as an atypical period piece when a gardener bids good morning to Sister Fernanda (Aubrey Plaza) and Sister Genevra (Kate Micucci), who immediately fly into a rage and roar “don’t fucking talk to us!”

Indeed, these sisters aren’t the pious servants of Christ you might expect: Fernanda is prone to fits of violence and vulgarity, Genevra is an envious busybody seeking to be rewarded for tattling on her companions, and Alessandra (Alison Brie) is resentful of her father’s inability to scrape together enough coin for a suitable dowry that will see her married and rescued from cloistered life. Father Tomasso (John C. Reilly) does what he can to keep these unruly ladies in line, but his fondness for sacramental wine leaves him ill-equipped to combat their troublemaking.

Opportunity knocks in the form of Massetto (Dave Franco), a manservant fleeing the house of his lord (Nick Offerman) after being caught in a tryst with the lady of the house (Lauren Weedman). Tomasso offers the lad refuge under the condition that he assume the gardener’s duties and present himself as a deaf mute in order to prevent raising the ire of the sisters and thus submitting himself to the same expletive-laden abuse his predecessor suffered. But curiosity, sexual repression and the arrival of a handsome young man are a recipe for disaster, and Massetto finds himself trying – just barely – to fend off advances from all three sisters, with hilarious consequences.

Most of the laughs in The Little Hours are derived from watching women of the faith curse continuously and engage in the bawdiest of behavior, and the schtick admittedly begins to wear thin after awhile. But the third act, featuring love potions and witchcraft and lascivious late-night encounters, is so unabashedly insane that it boggles the mind as the film hurtles from one uproarious moment to the next. It’s pure batshit insanity, with a particularly bonkers turn from Micucci, as Genevra wrestles with the psychedelic effects of a home-brewed tonic.

There are a few loose ends, such as the forbidden romance between Tomasso and the Reverend Mother (Molly Shannon) which feels shoehorned in for no good reason, and the appearance of Fred Armisen as a stern bishop whose only chuckle comes courtesy of his costume. But these shortcomings aside, The Little Hours still makes for an enjoyable R-rated romp through 14th-century Italy, like a Monty Python sketch reimagined for audiences who like their humor a little more on the explicit side.

If you like your nuns foul-mouthed and sex-crazed, then Jeff Baena's third feature is just the racy and irreverent comedy you're looking for.