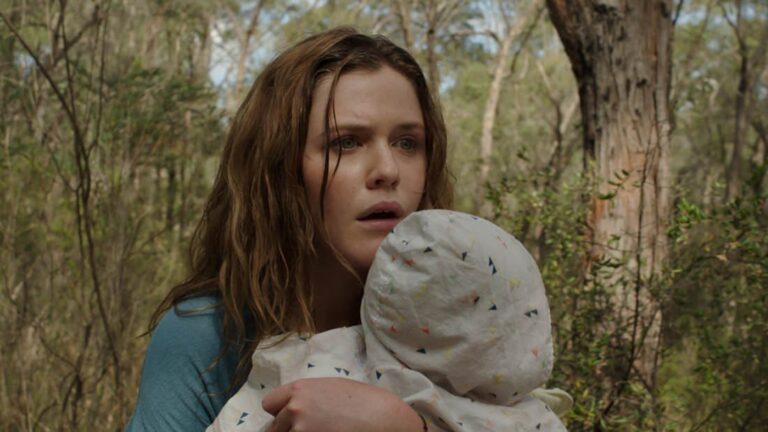 Premiering in the Midnight category at Sundance, Damien Power’s feature-length debut Killing Ground spins a pair of stories about ill-fated camping trips in the Australian wilderness. Unflinching in its violence and depravity, the film’s narrative unfolds in non-linear fashion so that both stories run parallel to each other, with their respective climaxes happening in stereo. But that’s the only trick Power seems to have up his sleeve, and a reliance on tried-and-true horror tropes and lurid subject matter becomes a burden the film can’t shoulder.

Young couple Sam (Harriet Dyer) and Ian (Ian Meadows) are on a last-minute holiday getaway, en route to an idyllic streamside setting that Ian frequented in his childhood. The illusion of solitude is destroyed when they arrive to find another tent erected nearby, but the occupants are nowhere to be found. Meanwhile, Margaret (Maya Strange) and Rob (Julian Garner) have taken their children – angsty teen Em (Tiarne Coupland) and toddler Ollie (Liam and Riley Parkes) – to a remote spot for a few days of hiking and relaxation. After a sleepless night plagued by nightmares, Em opts out of the next morning’s excursion, preferring to stay behind and get some additional rest.

As we intercut between the groups, it becomes evident that both scenarios are playing out in the same location, albeit with an undisclosed amount of time passing between each series of events. Sam and Ian discover Ollie wandering alone in the woods, mud-covered and dehydrated with no trace of his family, but a flat tire strands them at the campsite. And as the juxtaposition continues, both groups will find themselves menaced by a pair of sinister locals (Aaron Pedersen and Aaron Glenane) with nefarious motives, leading to a shockingly savage finale.

Killing Ground‘s unique approach to storytelling isn’t sufficient enough to offset the overly familiar story of bad things happening to strangers when they wander into the woods, and the usage of sexual assault as a catalyst feels especially distasteful this weekend, as millions of women band together to march in protest of a culture which marginalizes their experiences. Killing Ground might appeal to certain horror fans, but I’m clearly not one of them.