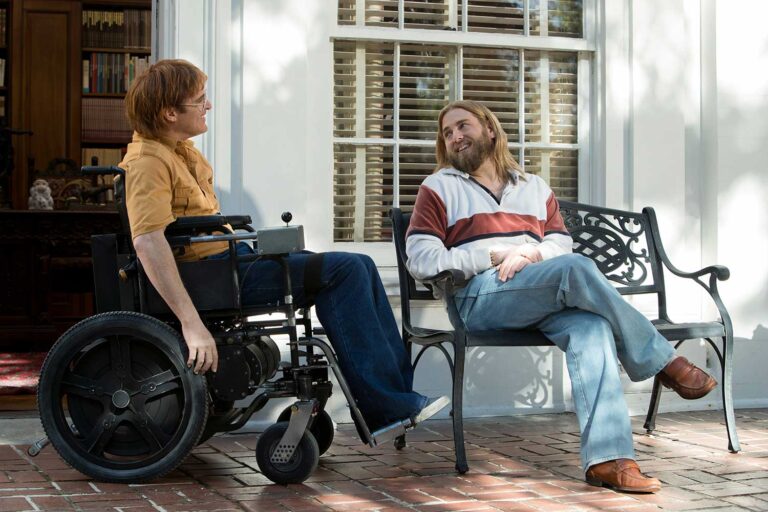 As I headed out for my third day, snow storm Jaxon was steadily transforming Park City, causing the town to look more like the ski destination that it actually is – which also made sloshing from one theatre to the next much less enjoyable than it had been the day before. Fortunately, there were several coffee shops along the way to help me get through it. After a very strong first day of films, I went into Saturday with high expectations and wet feet, and Gus Van Sant’s Don’t Worry, He Won’t Get Far On Foot lived up to the buzz. The story is based on the memories of John Callahan, a Portland native that barely survived a life-changing accident due to his alcoholism.  Joaquin Phoenix (as Callahan) and Johah Hill as Donnie, the rich hippie sponsor that helped saved Callahan’s life, put on an acting clinic. This is craftsmanship of the highest level, and both should be deserving of Oscar nods come next year. The story of Callahan struggling to maintain control of his sobriety while discovering a knack for politically incorrect cartoons is painted on the screen to near perfection, with the only issues stemming from the “flashback within a flashback” structure, which made following the film’s timeline a bit confusing. However, the performances are so strong that it’s pretty easy to overlook that criticism.

After making the walk from the Eccles to Park Avenue Theatre, I settled in for film that I was most interested in prior to the festival: Lizzie, yet another “based on a true story” offering. There have been several different takes on the story of Lizzie Borden and the infamous axe murders of her father and stepmother, and this one puts another interesting twist into the events that occurred in 1892. Chloe Sevigny plays the title character, supported by Kristen Stewart as housemaid Bridget Sullivan and Jamey Sheridan as her father, Andrew Borden. Sevigny gives us a performance where we understand Lizzie’s motives and while possibly providing some justification, we’re never given a reason to feel too much sympathy for her. This is a very delicate line to balance, and the story does a great job of conveying that. Methodical and slowly paced, patience is rewarded during the third act of the film as we see just how far Lizzie has been pushed. It’s certainly not a perfect film, but there are definitely highlights that will warrant another viewing.

I had just enough time to devour a delightful chicken and dumpling pot pie from the Boneyard restaurant before I made my way to the Holiday Theatre for film number three: Eighth Grade. This dramady from comedian Bo Burnham, about the awkward horrors of being a middle school student, left me more frustrated than excited. We follow the last week of eight grade for Kayla (Elsie Fisher), a social media-obsessed introvert trying desperately to fit in. Some of the anxiety and experiences seem to ring true for middle school-aged children as they search for their peer group and how to socially interact with each other, but there were a few scenes that felt mired in stereotypical misconceptions about education that it just took me out of the film.  I understand some of them might have been from the perspective of Kayla and not necessarily how the events might have truly happened, but as an educator in real life, sometimes I get tired of seeing my line of work take the blame – especially in a medium that has the power to help change that image.

Concluding another four-film day was the one documentary that I was most excited to see, Won’t You Be My Neighbor? about the late Fred Rogers. Growing up as a child in the late seventies and early eighties, at some point in time you watched Mr. Rogers’ Neighborhood and more than likely, you watched it as often as you could.  This television show was addicting and inviting for the young eager mind of a child – myself included – and this doc pulls back the curtain to provide a wealth of information about the man behind it all. Director Morgan Neville wonderfully takes the viewer through the evolution of Rogers’ legacy, showing many of his triumphs as well as failures, even showcasing how Rogers essentially saved PBS from having their funding cut during the Nixon administration. According to those who were there, it appears the man behind the sweater was the same man in front of the camera: totally committed to educating and helping children, and the film left me feeling that Rogers always felt his message was paramount even in the face of his detractors. I don’t know if this doc will have the same effect on younger generations that aren’t familiar with the original television show, but for those of us who remember it fondly, it’s a wonderful experience.

After strolling through Mr. Rogers’ Neighborhood, a quick Uber ride back to the condo and and a few hours of sleep were in order – and it’s a good thing I got some rest, because I would need it for craziness that would kick off the following morning.