‘The Dark Knight Rises’ – does the legend truly end? 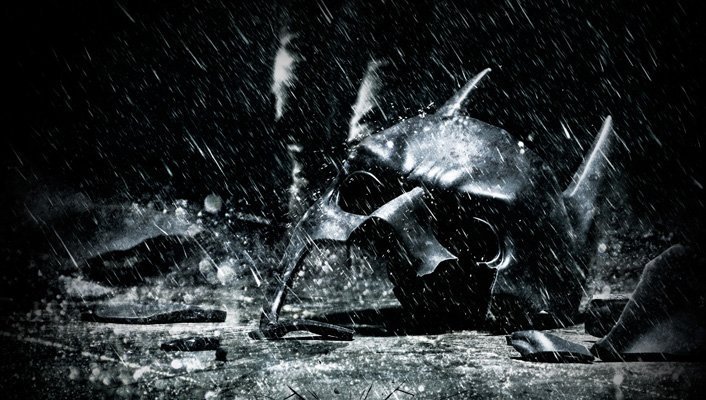 My first exposure to Batman was via repeats of the campy 1960s television series starring Adam West. I was probably only five or six years old at the time, but I remember running across the yard every afternoon to our next-door neighbor’s house, where my childhood best friend and I would sit on the living room floor, mesmerized by our hero’s ability to constantly outwit and overcome his foes.

I remember Burgess Meredith’s iconic “waugh waugh waugh,” an umbrella slung over his shoulder and a cigarette holder jutting from his mouth. I remember Ceaser Romero’s ridiculous “hoo hoo hoo” as he giggled at whatever plot he had constructed on this week’s episode. And I remember pretending to be Batman, a blue bath towel tucked into the back of my shirt as a cape, acting out elaborate fight scenarios and shouting out sound effects like “BIFF” and “KA-POW” while I threw kicks and punches at invisible enemies.

I can recall, quite vividly, the first time I saw footage from Tim Burton’s Batman. I had gone with my parents to visit some friends of theirs, and while basking in the glory of satellite television I stumbled across the film’s third act, specifically the scene where Batman crashes onto the steps of the cathedral and heads inside for a final showdown with The Joker. I would eventually acquire a copy of the film on VHS, and would watch it nearly every Saturday morning for years to come.

Batman Returns was one of the very first films I saw in a movie theater. My parents had often taken me with them to see movies at the drive-in, but my experiences with indoor theaters were few and far between at that point in my life. I was amazed at the film’s gothic visuals, terrified of Danny de Vito’s Penguin, and enthralled by Michelle Pfeiffer’s blatant sexuality as Catwoman. Of course, at eleven years old I didn’t even know what the hell blatant sexuality was – I just knew that I wanted to see a whole movie devoted to Pfeiffer and that black vinyl catsuit.

Batman: The Animated Series can be credited with sending my fandom into the stratosphere, introducing me to a host of new villains I was unfamiliar with, and further expanding the legend of the Dark Knight by providing more insight into the man behind the mask. As enjoyable as the Burton films were, they were sorely lacking in character development, and the more I learned about Bruce Wayne and his tragic past the more I was able to sympathize with the character.

I won’t bother to delve into my hatred for the Schumacher films, with their neon colors, ridiculous costumes and laughable dialogue. They’re so far removed from any other interpretation of the Batman universe that I just pretend they never happened. It was a shame that the critical failure of Batman and Robin caused Hollywood to sour on the idea of more Batman films, but on the flip side of the coin, would anyone have wanted to see more of that crap? Six years would prove to be enough to clear the slate, and Warner Bros. wisely began looking for someone to take the franchise in a completely different direction.

Enter Christopher Nolan, fresh from the success of Memento. By this time, I had several years under my belt as a video store clerk and had become a full-fledged lover of cinema, so I was familiar with Nolan’s body of work. The news that a bold, original young director would be relaunching a franchise that Hollywood had pissed all over and abandoned was more than enough for me to become cautiously optimistic, and that optimism would not be in vain, as Batman Begins completely changed the landscape and altered the public’s opinion of what a comic book film could – and should – be.

Rather than populate his cinematic universe with silly costumes and super-powered villains, Nolan created a world that could easily be our own, and grounded the character of Bruce Wayne firmly in a reality that audiences could relate to. At the core of the Batman legend is a very human tale about a man’s internal struggle to channel his negative emotions into something positive, something bigger than himself and his petty desire for revenge, and Nolan is the first director to accurately capture these themes and bring them to life.

I think the affection people feel for Batman can largely be attributed to the fact that Batman could plausibly exist in the real world. Bruce Wayne doesn’t have a modified gene structure, he wasn’t bitten by a radioactive insect, and he wasn’t exposed to gamma radiation. Bruce Wayne is just a man, a man with the same feelings and emotions that we all have, and throughout his life has experienced more loss and more pain than anyone should ever know. Yet he finds himself driven ever forward by a fierce determination to devote every fiber of his being to the pursuit of an ideal, and doggedly refuses to give up – a quality that anyone can admire.

With The Dark Knight Rises, Nolan closes the book on his saga, but rest assured that the legend is far from over. The character has survived for more than 70 years, and while we’ll likely never see another Batman tale as intricately crafted or emotionally exhausting, the Dark Knight will endure long after the credits roll.