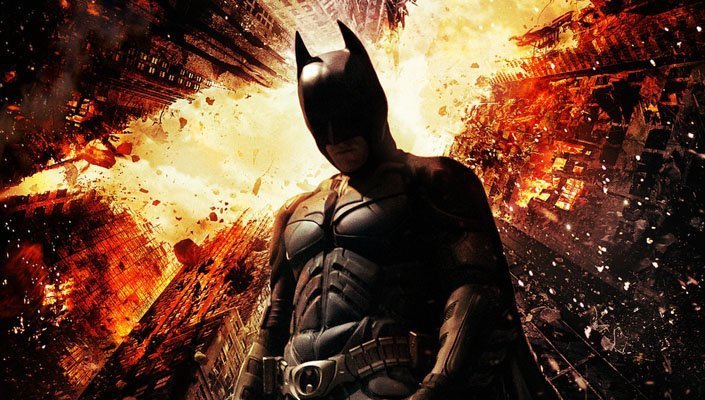 There’s no denying that The Dark Knight Rises is the most anticipated release of the year. When Batman Begins was released in 2005, it completely changed audience perceptions about what a superhero film could – and should – be, and with 2008’s follow-up, The Dark Knight, the bar was raised to nearly impossible heights. So does the final chapter in Christopher Nolan’s saga live up to the lofty expectations?

In The Dark Knight Rises, which takes place eight years after the events of its predecessor, economic instability has become a driving force behind the actions of many characters, including master burglar Selina Kyle (Anne Hathaway), who fancies herself a modern-day Robin Hood as she steals rare and valuable items from Gotham’s most elite citizens. “There’s a storm coming,” she warns Bruce Wayne, foreshadowing the downfall of the upper crust at the hands of a terrifying new adversary.

Bane (Tom Hardy) is a mercenary and terrorist who sees Gotham as the epitome of decadence and depravity, a contemporary Sodom and Gomorrah that must be brought to heel. The themes of anarchy and nihilism that permeated The Dark Knight are explored in greater depth here, as Bane devises a brilliant plan to cripple Gotham from within and bring the city under martial law.

One of the key strength’s of the franchise has always been Nolan’s decision to ground the material in a reality the audience could not only accept, but also relate to. Nolan’s Batman inhabits a world very much like our own – there are no superpowers here, no radioactive insects or genetically engineered super-soldiers, and the plausibility that a Batman could actually exist somewhere out there allows us to become more invested in his story.

This has never been more true than in this film. Bruce Wayne (Christian Bale) is a shadow of his former self, a man beaten down and broken by the hardships he has endured. His strength and agility are a fraction of what they once were, and his seemingly unlimited resources have nearly been depleted. Donning the cape and cowl for the first time since the death of Harvey Dent, he finds that he is no longer the fearsome wraith that stalked the rooftops of Gotham, and the film is just as much about Wayne’s struggle to find his path as it is about big action set-pieces and epic fight sequences.

Every performer is at the top of their game here, but Hathaway deserves special recognition for stealing every scene out from under the noses of her costars, much like her character would have done. Hardy’s imposing physical presence is matched only by his cold, cruel dialogue delivery as he creates what may be the most chilling villain in the franchise, and audiences will be quivering with anticipation as he and Batman walk toward each other for their inevitable confrontation.

Much like the previous two entries, The Dark Knight Rises takes great care to establish emotional ties to the characters and to communicate the true nature of the conflict. Some may balk at the colossal 164-minute running time, but the narrative unfolds at such a calculated, mesmerizing pace that you’ll never even think to glance at your watch, and when the house lights come up, you’ll be begging for just a few minutes more.