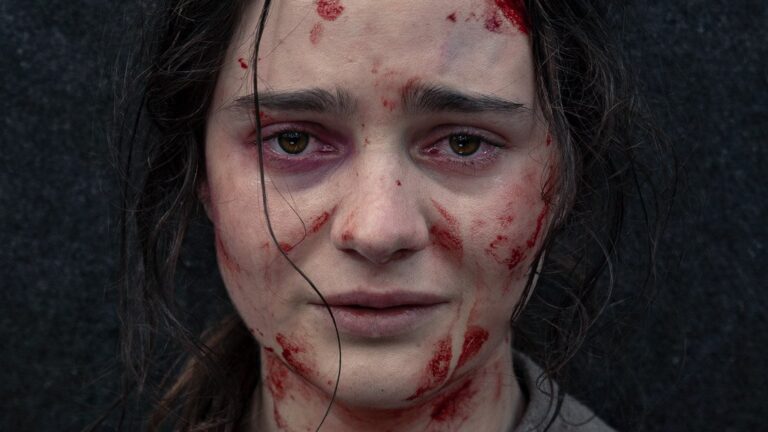 The Nightingale, Jennifer Kent’s follow-up to her 2014 horror hit The Babadook, is far removed from the supernatural scares of her previous work. Yet this tale of revenge set in 1820s Tasmania is no less terrifying, filled with some of the most shocking and brutal moments ever depicted onscreen, showcasing an altogether different sort of horror that is already proving to be difficult for audiences to stomach (numerous walkouts occurred during each of its screenings at the Sundance Film Festival).

Irish convict Clare (Aisling Franciosi) toils away in service to Lieutenant Hawkins (Sam Claflin), a British officer who had promised to release her from custody at the conclusion of her sentence several months earlier, but continues to torment her. She hides the frequent bouts of abuse from her husband, Aidan (Michael Sheasby), but when Aidan’s patience finally runs out, he demands the Lieutenant set her free so they can get on with their lives. The ensuing brawl results in disciplinary action being handed down by Hawkins’ superior, and Hawkins retaliates in particularly heinous fashion. The violence to which he subjects Clare and her family is stomach-churning in its savagery, and squeamish viewers would be forgiven for tapping out at this point.

Unfortunately for Hawkins, Clare survives the attack, and the only thing on her mind is vengeance. Knowing that Hawkins and his men have fled into the wilderness and that she can’t navigate on her own, she reluctantly enlists the services of an aboriginal tracker who calls himself Billy (Baykali Ganambarr) to help her locate the men responsible for her misery. Billy is distrustful of Clare, having seen firsthand the sort of destruction that white people — particularly English troops — have visited on his people (he relaxes, just a little, when he learns Clare is Irish). Clare is equally wary of Billy because of her racist beliefs that all blacks are thieves, murderers and rapists, and when the journey first begins she spends most of her waking hours with a gun pointed squarely at her guide’s back, lest he make any threatening gestures.

At first, Clare treats Billy with the same sort of cruel disdain that Hawkins reserved for her: she sees him as a lesser being, and not worthy of her respect or trust. She even accuses him of abandoning her to die when he disappears shortly before an encounter with a group of white prisoners being transported by armed guards, but his motives here are completely about self-preservation. Billy knows the danger that white men with guns pose to him, and Clare can’t risk anything happening to Billy — as he tells her plainly “bit hard for a dead man to show you the fucking way.”

When they finally catch up to one of the men and Clare unleashes her rage, the results are horrifyingly gruesome, so much that someone in my screening actually passed out, causing the film to be stopped and medical personnel to be dispatched (the gentleman in question recovered and the film resumed shortly thereafter). The aftermath of this moment is one of The Nightingale‘s most powerful scenes, as Billy, terrified by the outpouring of violence from this crazy white woman, is reluctant to continue as her companion. But when she confesses the truth of why she seeks revenge, he recognizes in her a kindred spirit. The cruelty Clare has experienced is not unlike Billy’s own run-ins with white soldiers, which have left most of his tribe decimated, and he understands and empathizes with her need for vengeance.

Franciosi and Ganambarr are both spectacular in this sequence — and throughout the film — and the uneasy bond that forms between them feels organic and genuine. Kent forces both characters, and the audience, to examine their personal prejudices and acknowledge that just because we’re told something about another race or class of people doesn’t necessarily mean those things are always true. And as Clare and Billy continue their quest, Kent is eager to explore the mental and emotional consequences of employing violence against another person: the righteous idea of revenge is often starkly different from the cold reality of it.

Claflin, so dashing and charming in the Pirates of the Caribbean and Hunger Games franchises, is absolutely monstrous as the sadistic Liuetenant, and viewers will have a difficult time conjuring up a cinematic villain that evokes so much hatred. Nothing about Hawkins is redeemable, and the same can be said for his wretched sidekick, Sergeant Ruse (Damon Herriman), whose cruelty is matched only by his stupidity. Their barbarity is not just reserved for Clare, but doled out in equal measure to virtually everyone they deem inferior. The violence is exhausting in its relentlessness, almost turning Kent’s film into an exercise in endurance.

But perhaps that’s fitting, as Clare and Billy have been forced to endure unspeakable tragedy and hardship, continuing onward only through sheer force of will. Beneath all the violence of The Nightingale lurks a somber and beautiful tale about two people from disparate worlds finding commonality, and using it as a foundation to stand up against their oppressors. Kent’s choice to wrap these themes in such a provocative package won’t sit well with everyone, but viewers who can stomach the savagery will be rewarded.