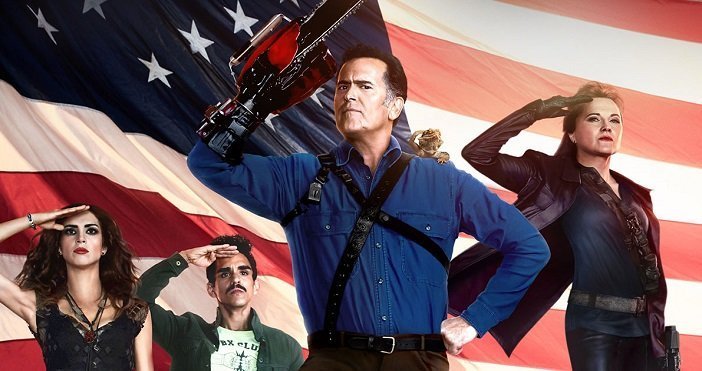 Ash vs Evil Dead Season 2 has just solidified itself as the most batshit-crazy show, on television and we couldn’t be happier. Starz was kind enough to give us access to the first two episodes of the season, titled Home and The Morgue, and fans better buckle their seatbelts – we kid you not.

The season premiere picks up shortly after the Season 1 finale left off with Ash (Bruce Campbell), Pablo (Ray Satiago), and Kelly (Dana DeLorenzo) wasting away in Ash’s Margaritaville aka Jacksonville, FL. But the Deadite truce with Ruby (Lucy Lawless) doesn’t last long and the trio find themselves heading back to Ash’s hometown of Elk Grove to find out just what the hell is going on.

Home kicks off the season with one of the looniest, goriest fight sequences the show has ever done and it’s a hilarious start to the insanity that Season 2 has in store. There’s plenty of great practical gore effects mixed with some consistently stellar creature designs that the show keeps adding with great success. Home establishes a looming threat and the interesting backstory that Ash didn’t exactly leave his hometown on normal or good terms.

The episode also introduces us to Ash’s father Brock Williams (The Bionic Man himself, Lee Majors), a grumpy, lewd gentleman with all the poise and class of a garbage disposal – basically an old Ash. He doesn’t factor heavily into the plot of the first two episodes, but boy is Majors funny in the role, with his deadpan delivery and insatiable attraction to the opposite gender.

While Home was more of a top-notch episode using the Ash vs Evil Dead formula, The Morgue, which airs the following week, is a bizarre, jaw-dropping X-rated Looney Tunes horror-comedy that I wouldn’t dare spoil for you here, and should make the internet explode when fans finally see it. There’s a sequence midway through the episode that is clearly the work of some deranged individuals and I was shocked and laughing my ass off the entire time.

The Morgue also has a lot more Lucy Lawless, and it’s great to have her Ruby in more of a central role. The character continues to be mysterious and impossible to predict while bringing a great dynamic to the team. Pablo gets some one-on-one time with Ruby in this episode and it’s some of his best stuff thus far in the series. Did I mention there’s a lot of gore and disgusting-ness in the episode? Ho boy, yes.

I haven’t mentioned The Chin himself much so far in the review, but Campbell is going all in this season. His one-liners are funnier than ever, Bruce is right in the middle of all the action, and man, does he take some big ones for the team in these first two episodes. Ash vs Evil Dead Season 2 is pulling out all the stops and if you’re not watching yet, you’d better get on board because everyone is going to be talking about it once this season kicks off.

The first two episodes of the new season hold absolutely nothing back and splatter the audience with endless gore, laughs, and great one-liners. A sequence in the second episode is possibly the most disgusting and insane thing ever done on television - and we love it.