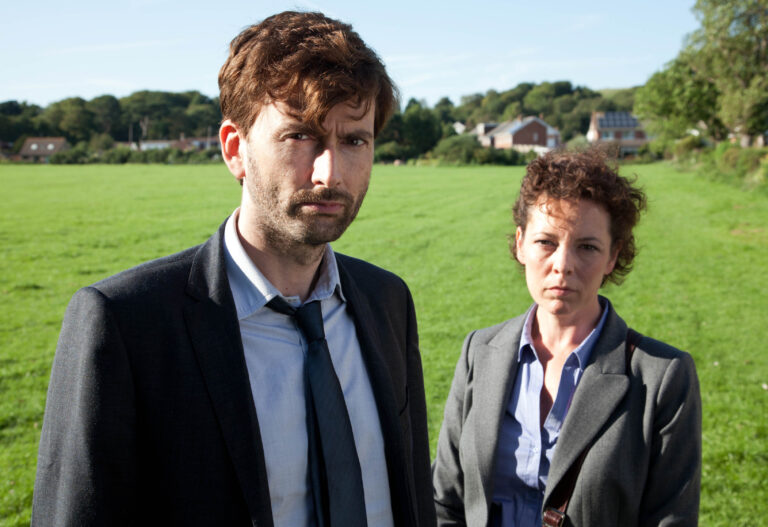 Broadchurch stars the beloved tenth Doctor, David Tenant, as Detective Inspector Alec Hardy, who is brought in to the sleepy seaside tourist town of its namesake when a eleven year old boy is found murdered on the beach. He teams with empathetic local Detective Ellie Miller (BAFTA award winner Olivia Colman) that has connections to the boy’s family through her own and with little evidence to go on, the search for the killer puts a strain on the relationships between the town’s residents.

[pullquote_left]The murder mystery aspect here is much more cerebral and thought out.[/pullquote_left] Having seen the first handful of episodes, I have to agree with UK twitter fans on Broadchurch because it is a gripping, well done whodunnit drama that deserves all that attention and praise. The subject matter is dark and quite sad but the show doesn’t make you completely wallow in misery, which is why a lot of similar shows can be difficult to watch. Something about the brightness of the beach setting and the close-knit relationships in the quaint town pull the viewer closer into the investigation but without the soul sucking darkness of, say AMC’s The Killing or the more bombastic approach of FX’s The Bridge, due to the murder mystery aspect here being much more cerebral and thought out.

For those looking for the other Doctor Who alum teased in promos besides David Tenant and David Bradley (Doctor Who: An Adventure in Space and Time) Arthur Darvill as Reverend Paul Coates, he only shows up in passing and emerges as the show continues forward. Sorry Rory fans! But between The Latimers (the victim’s family), the journalists, the police and the townsfolk, there’s plenty to take in and analyze in the first installment of the 8 episode series. While the show has aired completely in the UK, the BBC has asked American journalists to hold all spoilers so as you can expect, there is some big stuff to come and I, for one, do not want to ruin the experience for anyone watching week by week because Broadchurch is one the best mystery/dramas currently on TV.

The cast is phenomenal. The seaside setting with the gorgeous ocean shots. The mystery! The care with how the story is told. The intelligence with which its all portrayed.

The dark material doesn’t allow for much humor. The disgraced detective regaining his honor through a case similar to what disgraced him has been done to exhaustion. The show will probably be overlooked by American audiences.

An intelligent, thoughtful, sometimes traumatic murder-mystery that will keep you guessing with its sharp performances and complex characters in a standout series for the BBC.