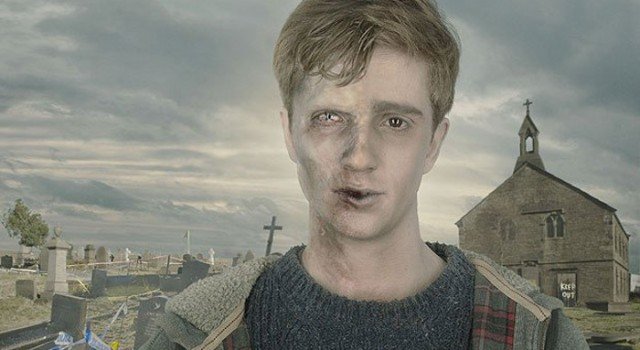 The zombie apocalypse has been tackled pretty much every which way by every entertainment medium. The new three-part miniseries from BBC America decides to hell with the actual apocalypse part and let’s see what happens after “The Rising,” as it’s called here, as society starts to settle back into some thread of normalcy. Oh, but the catch is that humans have been able to somewhat “cure” the zombie infection, at least to the extent that the undead can regain their mental functionality but retain the creepy zombie eyes as their bodies are in varying states of decay.

But rather than play this scenario for laughs or cheap scares, In The Flesh tells a dark and complex story of society’s ability to hate and the prejudices that people face on a daily basis for any number of reasons. Kieren Walker (played with mopey teen angst by Luke Newberry), has just been released by the government from his treatment of his PSD or “Partially Deceased Syndrome” and is returning to his parents and younger sister in the village of Roarton in Lancashire, England. These PSD sufferers are able to restrain their zombie urges with direct injections into their spinal cord on a daily basis and are given contact lenses and skin makeup to make their transition easier for their acceptance back home.

Some of the most interesting elements are the smaller things, such as the idea of “PSD” as humanity’s way of addressing the dead rising as just some other prescription-treatable form of affliction. And yes, in this version the dead actually rise unannounced like the classic zombies of old and are not the result of some viral outbreak. Part of the fun of Dominic Mitchell’s script is its courage to buck the norm of today’s common undead benchmarks, such as zombie bites that spread an outbreak, in favor of a more unexplainable event that many take to be biblical in nature.

[pullquote_right]This is not a shoot-em-up zombie film or gross-out horror gorefest.[/pullquote_right]It’s a complicated world Kieren inhabits and there is a lot of baggage and unresolved issues that he returns to that are the core of this series. In The Flesh is not a shoot-em-up zombie film or gross-out horror gore fest. As a matter of fact, very little of the normal zombie staples are even in this series. This is a story about loss and closure and all the things you would say to someone you’ve lost if given a second chance. Part 2 has the lighter content of the trilogy, with the introduction of Amy Dyer (Emily Bevan) as another PDS victim that has ties back to the days of Kieren’s “untreated” state, but also helps him become less ashamed of who he is while trying to re-establish his life.

The young cast is all pretty green (no pun intended) but manage to endear themselves enough with their performances to sell the tragedies of their past and immediate future. Kieren’s best friend and military man Rick Macey (David Walmsey) has the most complex material to work with and does a commendable job of portraying the many layers of his tortured personality.

Rick’s father Bill Macey (Steve Evets) also has quite a story arc and Evets’ portrayal is menacing while still evoking a certain amount of empathy for his situation. Bill also runs the local HVF (Human Volunteer Force) that battled “The Rising” and Kieren’s own sister Jem (Harriet Cains) is a member, obviously causing some sibling friction, but thankfully Cains portrayal and Dominic Mitchell’s script keep her from being too predictable.

One other minor complaint is that there are threads of the story revolving around a mysterious pro-zombie contingent led by a freaky cult leader in a skull ski mask that are trying to start a pseudo-zombie rights revolution that never really work their way into the story. This definitely comes across as setup without payoff, but seeing as this series has already aired across the pond in the UK and been renewed for a second series we’ll probably find answers in 2014.

The premise. The unwavering commitment to stick to the premise’s tone. David Walmsley. The moody indie music of Keaton Henson. The unexpected character developments in the last half of Episode 2. The realism of how the aftermath of “The Rising” is handled by governments/humanity.

Good lord is this miniseries depressing. Lack of experience in some of the younger cast. A bit too goth in theme. Did I mention this is really really depressing??

While you can’t deny there is some powerful material here and it’s one of the most original zombie stories in a while, the miniseries is so bleak and emotionally brutal that it takes some of the fun out of the undead.