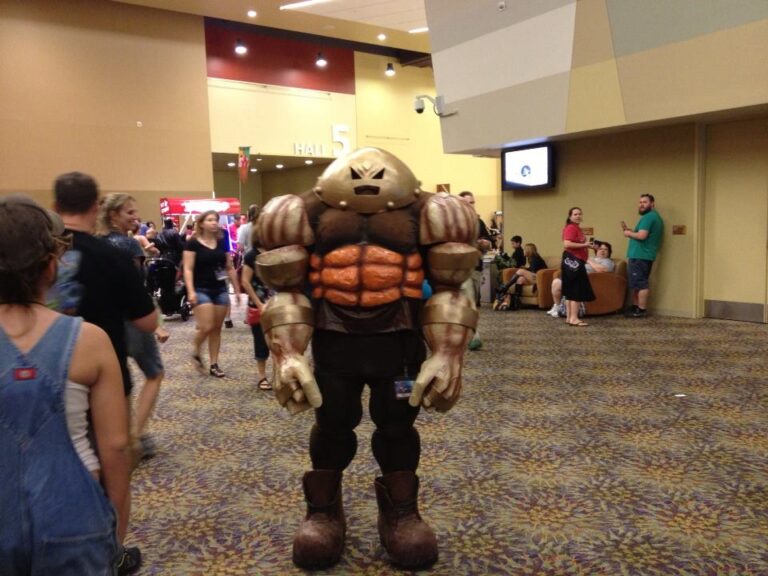 Though I had a lot of fun writing about the absolute blast I had experiencing some of the horrors of Phoenix Comicon this year, I honestly did spend most of my time really trying to get to know the everyday folks who were attending. The thing you have to understand about these conventions is that while a small percentage of folks are legitimately scary people, the vast majority aren’t. They’re like you and I. They’re like your parents and siblings. They are there to celebrate their particular favorite facets of pop culture.

I spoke with Mr. and Mrs. Miller one evening as they took time off from walking around the exhibit hall to get a snack with their children (whose names I promised not to mention because the internet is a terrifying place). They were visiting the ‘Con from Yuma, Arizona and they were there for one thing alone: Star Wars. Mrs. M had a Poptart Cat t-shirt on and Mr. M had a Jedi Order tattoo on his wrist. Their younger child was dressed up as Han Solo and their daughter had her mother paint her face to look like Queen Amidala from Episode One.

I asked the family what they were excited about, and all four of them mentioned the Lego building station near the Mos Eisley display. I asked the father what kind of things Star Wars had allowed him to instill as lessons for his kids, and his son cut him off just to tell me that “Jar Jar SUCKS!”

Smart kid. Parents of the year, if you ask me.

Aside from the Miller family, I spoke with a handful of cosplayers of all shapes, sizes, creeds, and genders. Every single person I met was willing to spend time talking my ear off about the little corner they’d found in the universe here in Phoenix that allowed them to finally stand up and be proud of their passions. Though the media wasn’t allowed to interview guests at their booths in the hall, I spent a few minutes talking to Jessica Nigri, a fairly famous cosplayer in the convention circuit. She was extremely nice and had a great sense of humor for someone who was wearing revealing clothing and surrounded by creepsters for the entire convention.

I meandered over to the tabletop gaming section of the ‘Con, and met up with a group of folks called the Pathfinder Society of Arizona. After an initial bout of confusion as to why I was poking around asking for interviews, I sat down with society Lieutenant Chris Mullican. He told me a bit about the roleplaying game Pathfinder, and explained his organization allowed for people from Europe to Brazil to register their gameplay with a worldwide consortium so they could play together regardless of their location. He’d been playing for about a year, and was in the middle of watching his player character fly into the air and subsequently die on impact.

But the Pathfinder Society isn’t just about roleplaying. A handful of the members are military veterans, and they run charities nearly year-round for Wounded Warrior, Toys for Tots, and the Juvenile Diabetes Research foundation. They were holding a raffle that day and all proceeds went to the Wounded Warrior project. Chris and co, if you read this, it was a pleasure chatting with you guys. You can get in touch with the AZ Pathfinder crew at their website if you’re interested in any more information. This is the Nerd Repository after all. If you can’t find out about new and geeky things to enjoy here, where can you?

I finished out my interviews with a member of the security team who was on break. He told me that while he wasn’t at liberty to discuss anything too in depth, the weirdest thing he had seen was a guy dressed as Spider-man who had defecated in his spidey costume and had to be escorted out. They spent most of their time making sure that people who didn’t have badges kept out of the convention and helping with calling ambulances if someone cosplaying a My Little Pony fell over from heat exhaustion. Though they did have to remove one asshole from the convention for using a GoPro camera to get upskirt shots of cosplaying girls. I walked past that guy and told him to cut it out. I knew exactly who they were talking about.

I may have joked about terrors and horrors in my companion piece to this article, but I really did learn something during my time at Phoenix Comicon. It was a safe place for people of all walks of life to gather and enjoy their hobbies and fandoms without the worry of too many folks trying to make them feel poorly about doing so.

The terms “nerd” and “geek” used to be something shouted across locker rooms and elementary school playgrounds, and now we’ve taken over the planet. You can’t make it through Football season without seeing Cam Newton pretend to rip his shirt open like Superman. I don’t have any doubt in my mind that it was at least in some small way due to these conventions letting folks come out of their Ninja Turtle shells and let their geek flag fly.