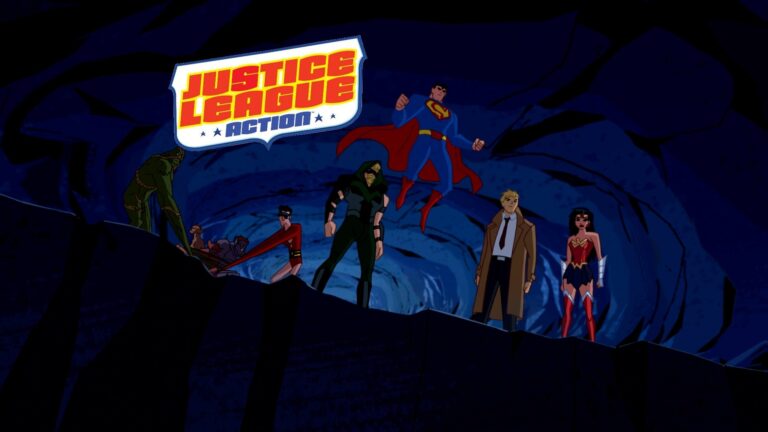 After a ten-year hiatus, the Justice League is finally returning to animated television with Cartoon Network’s Justice League Action. The series promises to be fast paced, lighthearted and boasts a catalog of over 152 characters from the DC Comics catalog. The show kicks off with a one hour premiere called Shazam Slam that delivers on the action and fun, but is also a bit light on emotional substance.

The premiere sees Batman (Kevin Conroy) drawn into a battle by the Wizard Shazam (Carl Reiner) to fight Black Adam on the Rock of Eternity. With the help of Billy Batson/Shazam (Sean Astin), Batman and the Wizard defeat Black Adam, but are unable to stop him from releasing a cadre of Djinn bent on turning the Earth back to its pre-human, volcanic state. When one of those Djinn target the villain Parasite to absorb his powers, Superman (Jason J. Lewis) and Wonder Woman (Rachel Kimsey) join the fight and the trio set out to stop the Djinn from destroying the world…with a little help from their League friends.

The story takes place in a world where the Justice League has been operating for a short amount of time – the Hall of Justice exists and the team is formed – so the show is not dealing with a full-blown origin story, but there’s a few elements by the end. The series will consists of 11 minute episodes with two airing in the shows weekly half-hour timeslot, but for the purposes of the premiere, Shazam Slam is the equivalent of four of those episodes. While this shortened episode format is also used for Teen Titans Go!, this JLA is definitely about the action over the comedy – so anyone that was worried, the two shows are quite different in tone.

The animation style and character designs are smooth and gorgeous, invoking the Bruce Timm style, but not doing a carbon copy of it. Justice League Action is all of the meat and none of fat moving with blazing quickness from action sequence to action sequence. The color textures and animation are extremely rich making the inventive fight sequences really pop on-screen.

The episodes also have a bit of Batman: Brave and the Bold style humor and aside from a few cornball jokes, I find myself chuckling quite a few more times than I expected. But if Shazam Slam is any indication, this show is much more Justice League Unlimited than Batman: Brave and the Bold or any of the other more recent, lighter DC animated series. I’m not sold that Action will ever have quite the emotional depth of Unlimited, but I have no problem with this show doing its own thing and having fun with it.

The voice cast is a big selling point and having Kevin Conroy reprise his role of Batman is enough to get any fanboy to at least give the show a shot. Seeing the Batman character design with Conroy’s voice definitely invokes pleasant memories of the previous Justice League series, but the rest of the Shazam Slam seems new and fresh. Jason J. Lewis is a natural as Superman bringing the confidence and warmth of Tim Daly and George Newbern’s previous work and Rachel Kimsey is a more fun, spunkier Wonder Woman, but still is a badass that needs to save the boys on occasion.

Shazam Slam takes advantage of the 152 character catalog from DC Comics and the Trinity get help from many Leaguers along the way including fan favorites Martian Manhunter (Crispin Freeman) and Booster Gold (Diedrich Bader). Manhunter seems to be the most altered personality from the source material with this skinnier, more cheery version who more than once reminded me of Abe Sapien from Hellboy. Bader, on the other hand, is spot-on as Booster and is a blast to watch as the big gold buffoon gets man-handled by Batman.

The episode has a few more surprise appearances from heroes and villains, but I don’t want to spoil every single one in the review. Part of the fun of Justice League Action is never knowing which character you’re going to see next, which creates a very rewarding experience for fans with deep DC knowledge and keeps things fresh in every episode.

Justice League Action is far removed from the dark world in the DC direct-to-video and is a family show that all ages can possibly enjoy. As a huge fan of the previous Justice League animated series, I had a great time with this new incarnation. Shazam Slam delivers what the title of the show promises with non-stop action and a vast array of DC Comics characters – and most importantly is an extreme blast to watch. The overall series, however, might need some time to evolve and mature if it wants to become something more than just empty calories.

With a lightning fast pace and a revolving door of fan favorite DC comics characters, it's tough not to have a good time with this action-centric return to animation for the Justice League - although it just might be missing some of the heart of the previous incarnations.