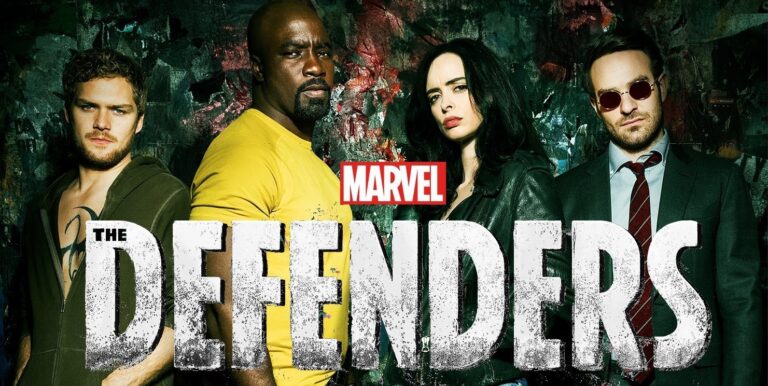 Four heroes, fives seasons on Netflix and everything has led to this – Marvel’s small screen super team is finally coming together this week in Netflix’s The Defenders. The streaming giant provided us with the first four episodes of the The Defenders the series, and as much as I’d like to say it was unquestionably worth the wait, unfortunately most of the front half of the season is varying shades of decent and mediocre.

The Defenders sees the paths of all four Netflix heroes finally begin to converge, including Matt Murdock (Charlie Cox), Jessica Jones (Krysten Ritter), Luke Cage (Mike Colter), and Danny Rand (Finn Jones) – along with quite a few of each show’s supporting characters. The threat, as many fans have guessed, is The Hand – the Big Bad that has been pestering all four heroes in one way or another in their own series.

Rather than skulk in the shadows with swords and hoods, these evil ninjas operate in broad daylight under the guise of Corporate America, led by Sigourney Weaver as Alexandra, the acting figurehead of The Hand in New York. Weaver is wonderful in the role, playing Alexandra with nuance and melancholy as the character’s layers slowly get pulled back over the course of the early episodes.

The drawbacks present in the first four episodes revolve around some very sluggish pacing and a re-emergence of the problematic elements present in each character’s previous solo outings. The entirety of the first two episodes are composed of the four heroes doing catch up with their supporting character friends – and Danny still being impatient and a brat. I’m usually not one to complain about smaller character moments, but other than Matt kicking ass and lawyering up in the court room, most of the early episodes feel like a long, boring “previously on…” montage.

But a funny thing happens when The Defenders finally all assemble – the show gets extremely fun! Like the flip of a light switch, suddenly all of the characters come alive with personality and great dialogue, the action picks up, and we’re treated to some great individual character and hero moments. Suddenly every hero feels very authentic and no one benefits more than our Iron Fist, Danny Rand. The developing bromance with Luke Cage (after an initial rough first meeting) is a delight and somehow turns Danny from the unsure mopey teenager-esque attitude, to the more fun-loving, good-natured martial artist fans were missing.

Thankfully once the action does get going, it’s really cool to see each hero use their powers together and play off each other’s strengths. The excitement that shows as they start to realize what they have in their team full of powered individuals starts to become infectious. Except for Jessica, who generally hates everything – but she also gets one of the best moments of awesomeness in the first half of the season.

The overall quality of The Defenders’ first season still relies on whether the show can stick the landing in the last portion of the initial eight episodes. The first few are rocky indeed, but at the very least I recommend you slog through them because once the team forms, the fireworks fly and I’m certainly back onboard and can’t wait to check out the rest of the season along with other fans.

The much anticipated team-up of Marvel's Netflix superheroes gets off to a slow, rocky start, but when all four Defenders finally come together after the unnecessarily sluggish opening, a switch is flipped and the show becomes infectious fun.