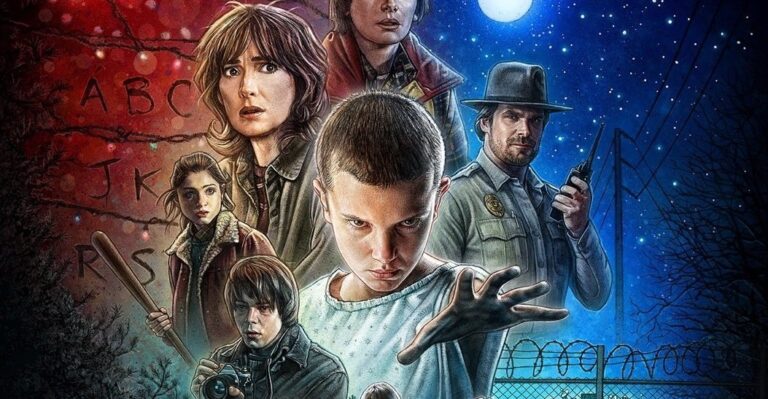 Netflix’s new monster mystery Stranger Things isn’t the first attempt to recapture the vibe of the 80s horror/adventure films – J.J. Abrams’ Super 8 comes to mind – but you’ve never seen anything quite like this series. The show is essentially genre-less, with numerous references and allusions to that time period weaved into a mysterious sci-fi horror tapestry that ends up being something wholly unique and utterly engrossing.

Netflix was kind enough to send me screeners of the entire first season of Stranger Things, which is set in Hawkins, Indiana in 1983 and revolves around the disappearance of young Will Byers (Noah Schnapp) as his family, three misfit friends, and the town Sheriff look for answers, but instead stumble across an unexplainable and horrific chain of events. Everything has a wonderfully dark, 80’s feel from the start with its synth soundtrack to the neon letters of the opening titles.

Soon after Will goes missing, a mysterious girl (Millie Brown) with a shaved head and the number 11 tattooed on her wrist appears on the outskirts of town, and the boys find and secretly take her in. The girl’s speech is limited, so the boys name her Eleven or “El” for short, and soon discover she may be an integral part of their friend’s disappearance – and maybe his only hope of being saved.

This series is very much a “kids with bikes” type adventure akin to the darker moments of E.T. and The Goonies. The nerdy boys and their pop-culture references coupled with a love of D&D make them immediately endearing and lovable – which makes the danger they face that much more intense, as they’re such easy characters to become emotionally invested in.

The kids in Stranger Things are just fantastic in every single role. Gaten Matarazzo as Dustin aka “Toothless” will most likely become everyone’s instant favorite with his harmless look, exuberantly geeky personality and constant swearing. But all the kids are very capable in their roles and bring their own dynamic to their fellowship. Finn Wolfhard is solid as Mike, the awkward de facto leader of the group, alongside Caleb McLaughlin as the fiery, but level-headed Lucas.

Millie Brown is also very impressive as El, while being given the extremely difficult job of conveying thoughts and emotions with very little speech. Her tortured back story with the awesomely creepy Matthew Modine as Dr. Martin Brenner, straight from your stereotypical shadowy government organization, are the flashbacks that play out during the entire season – revealing the origin of El’s special abilities and also things that are much more dire.

The adult actors are no slouches either and David Harbour is tremendous as grumpy, haggard Chief Hopper. His character has quite an emotional arc and Harbour runs the gamut of disillusioned, on the verge of a breakdown, to a strong and fatherly type with cool ease. Winona Ryder also turns in an energetic performance as Will’s manic mother Joyce, who begins to unravel the paranormal events surrounding her son’s disappearance, slowly becoming more frantic as more and more people around her begin to disbelieve her wild allegations and actions.

The town teens also get a B-plot with the romantic triangle between Mike’s sister Nancy (Natalie Dyer), Will’s brother Jonathan (Charlie Heaton) and town d-bag Steve Harrington, played with surprising complexity by Joe Keery in a role that ends up being much more layered than expected. The plot is pretty tedious in the early episodes and occasionally kills the momentum, but it does end up having a nice payoff in the latter half of the series.

Stranger Things also has some gorgeous supernatural environments and creature designs. After working on the excellent first season of Wayward Pines, The Duffer brothers know how to build tension without giving everything away too easily, and sci-fi horror fans will love the references to 80s classics and the other-worldly monster himself.

The eight-episode season of Stranger Things moves extremely fast, with cliffhangers in each episode that would be absolutely infuriating if there weren’t an option to immediately watch the next episode. Everything culminates in an extremely satisfying finale that mostly wraps everything up, but still leaves that all-important door open for a potential Season 2 – which can’t get here fast enough for me.

Engrossingly mysterious, funny, and heartfelt at every turn, this throwback to 80s horror/adventure is beautifully crafted and stocked with interesting characters and great performances from its talented cast. A must-binge series for any nerds who grew up in that decade or just simply love its films.