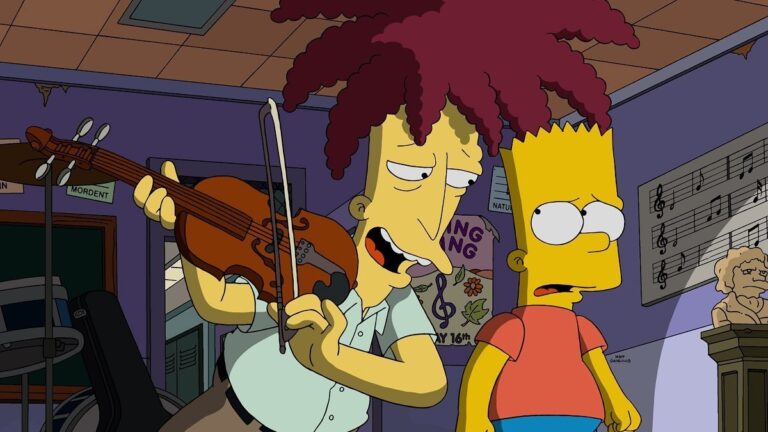 As reliable as the leaves changing and the days getting shorter, this time of year always brings a new The Simpsons Treehouse of Horror as long as the series continues to shamble along like the undead. Just in time for Halloween week, this Sunday sees the debut of Treehouse of Horror XXVI. Beware very mild spoilers below.

Things start out stranger than normal with a Trick or Treating “Couch Gag” from Ren & Stimpy creator John Kricfalusi. The sequence is beautiful and quirky, but at the same time creepy in its character designs. Even weirder, the segment has a You’re a Mean One, Mr. Grinch-style song over it about a monster that eats souls. Kricfalusi’s “Couch Gag” gets points for style, but not my favorite Treehouse opener.

Using the usual three story format, the first tale Wanted: Dead, Then Alive is probably the best of the trio. Kelsey Grammer returns as Sideshow Bob and finally accomplishes his series-long dream of killing Bart Simpson (Nancy Cartwright). As he continue on with his life, Bob realizes killing Bart is the best thing he’s ever done and devises a way to continually reanimate Bart so he can kill him again and again in increasingly extravagant ways.

This scenario allows for some of the over-the-top gore that make the Treehouse episodes so entertaining. Grammer is always reliably hilarious as Bob and makes the melancholy “Post-Bartum” depression (their term, not mine) his character goes through both empathetic and funny.

Homerzilla wreaks havoc in the second segment that starts off in black and white and moves its way forward through Godzilla history. Way back in Treehouse of Horrors III, they did King Homer and many of the jokes are retreads of the same ideas.

A giant monster Homer (Dan Castellaneta) screaming and crushing things is always hilarious, but the joke has been done. There’s a few humorous jabs at the long history of Godzilla and what Hollywood does with the beast, but it doesn’t keep the segment from feeling recycled. Also, the Japanese version of the Simpsons characters all talk with mildly racist accents that felt like a poor choice.

The last segment is a spoof on the found-footage superhero flick Chronicle and sees Bart, Lisa (Yeardley Smith), and Milhouse (Pamela Hayden) gain powers after encountering a radioactive sludge in Telepaths to Glory. This story seems shorter than usual and rushes through its parody with mostly predictable super power jokes, but still has a few humorous moments and a very funny meta closer for the episode.

Eagle-eyed Treehouse fans will also get a kick out of spotting the cameos of past characters/creatures throughout all three tales.

In an odd side note, the logline for the episode describes the middle segment as “Homer wakes up with short-term memory loss,” and while I suppose that could be a cheeky way of describing the Homerzilla story, it seems like The Simpsons team may have switched out some segments, since the memory loss segment did not appear on screeners sent to press.

Treehouse of Horror XXVI could have possibly benefited from reversing the order of the stories and ending strong with Wanted: Dead, Then Alive, but the episode has its share of bloody laughs along the way and is still a quite enjoyable addition to the beloved Halloween tradition.

This year's Halloween extravaganza isn't one of the best of the series, but has its share of overly gory laughs and funny moments to remain an enjoyable entry to the annual series.