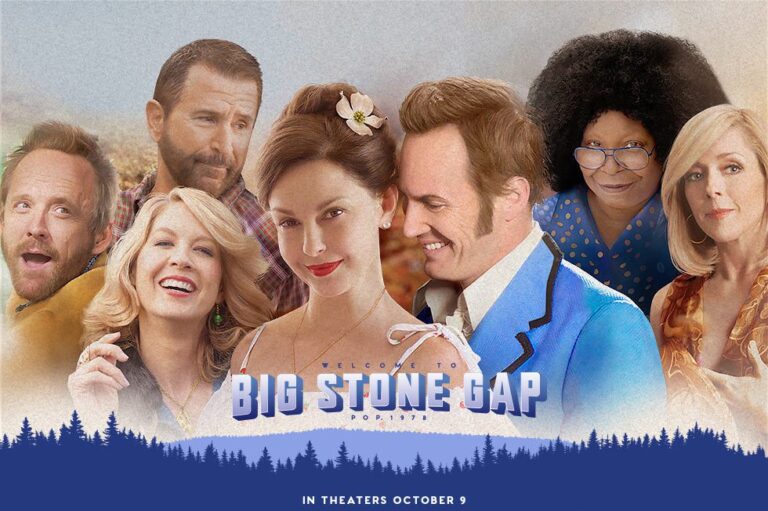 Ashley Judd stars in Big Stone Gap, the personal story of woman finding herself later in life, and her love for the sleepy little town she was raised in. The film is the directorial debut and passion project of Adriana Trigiani, the author of the book series of the same name, and stars an eclectic cast of colorful actors that bring the town to life.

Not only is the film very personal to Trigiani, but actors/brothers Patrick and Paul Wilson star in the film that was also shot on location in the home to their family for generations. On a recent press tour, the lovely and hilarious Jenna Elfman, Paul Wilson, and Adriana Trigiani sat down with us to talk about small town love and the surprises and beauty of these small-knit communities. You can check out the highlights below.

The cinematography in this film is gorgeous, and the town of Big Stone Gap itself is almost a character. Would you have made this film had you not been able to shoot on location?

Adriana Trigiani: There is no way in my heart, and the reason it took this film so long to get made is because I insisted it be made there. Because I believe that films are living art forms and I know when I watch a movie, an American movie made in Canada, I know it’s Canada. I know the people are Canadian. You can’t fool me.

Jenna Elfman: What are you talking a’boot? [laughter]

Adriana Trigiani: I know that they’re Canadian. And that’s fine. And I love Canadians, but don’t try to sell me that as Big Stone Gap. And I felt very strongly about that. I wanted it to be shot in my home town for many, many, many reasons, but first and foremost the artistic reasons. And then you know who the cinematographer of this movie was, Reynaldo Villalobos (Breaking Bad), well he’s A-list. So we have an A-list cinematographer, and a A-list cast, so we already had the superb artisans. So you were going to get the best version of Big Stone Gap that you were ever going to possibly get.

Paul Wilson: It had a starring role. We couldn’t have recreated Wood Avenue, although we recreated a mine just for pure economy, not being able drive up to one. The town itself plays such a key starring role as it’s holding everybody together, but also breathing life into all the eccentricities and the realities and relationships.

Jenna Elfman: There is real texture in this movie! You felt it filming it. You felt you were living in a painting, you know?

Adriana Trigiani: That outdoor drama [performed within the film]? The woman who’s the lead in it, Barbara Polly, she’s sitting in the wedding and then she’s at the hospital.

Paul Wilson: She was there 50 years ago with my Dad. There was a poster commemorating 50 years of the trail, and yeah, there is an organic authenticity to this that could never have been recreated.

Adriana Trigiani: No, you couldn’t have made it up. And then it just kept layering, and that’s why this movie feels rich. It’s because it’s a stew. It’s been marinated over time, and time, and time. And then when we went in to edit it, this wonderful sense of these characters, we had them. We had that footage. And those colors!

Adriana Trigiani: When we took everyone to the outdoor drama and said, “There’s your pallette!” Those midnight blues, those ruby reds, those purples you see when the leaves turn.

Paul Wilson: And that’s only in that area. Talk about a gamble. Fall in Virginia in the mountains…

Paul Wilson: … is about 25 days, and then the leaves come off and you’re right in a full-on dearth of color.

Paul Wilson: That’s right. And if you get a bit of a big wind storm early, then forget it. All the leaves are gone after two weeks, right?

Adriana Trigiani: Like we say, a rain storm will beat the leaves off the trees and then they’re gone.

Jenna Elfman: There are many a times, like on the weekend I had my kids with me and we’d go driving and exploring. I was born and raised in Los Angeles, and my breath would be taken away. I couldn’t believe that I was looking with my own eyeballs at something so glorious, and not some cool lens that made it look that way. I was like, “Mother Nature, oh my God!” I was just like, “BOYS! LOOK OUT THE WINDOW!”

Adriana Trigiani: People asked if we painted things in post. We did nothing, nothing to that.

Jenna Elfman: Yeah, that tree with [her character Iva Lou’s] Jeep. What kind of car is that? No, I don’t know what it’s called. That blue Land Cruiser, which is owned by the town manager. That tree, that oak in front of Ave Marie’s home, that is that resplendent gold and yellow. That’s not touched.

Adriana Trigiani: Ray shot it that way. And that blue Jeep. And that’s all real. That’s how it looks, that’s what it was to grow up there. Those colors were there.

Jenna – one of the things I loved about your character was her obession with the art of face reading. Have any of you looked into doing the face reading and whether or not that’s something you could believe in?

Adriana Trigiani: Well, I’ve been trained in it, because I lived in a boarding house and the lady that was the house mother was trained by an old master. And so she trained me. So the minute you walked in I read both your faces. And I knew instantly what you guys were all about. Which is really cool. As I instantly knew, and this is from the height of your ears, that both of you are very bright.

Do you consider Big Stone Gap to be an ode to the Frank Capra films?

Adriana Trigiani: Everything Frank Capra did is an inspiration to me. One of the most important things to me about Frank Capra was his use of real people in cinema. That bus trip in It Happened One Night, when they sing the amazing flying trapeze, when he pushed in close? Ricky Wiles was really cast in this movie because of Frank Capra.

The people at Big Stone Gap, when I go in on them, it’s to remind people we’re telling real stories about real people, so don’t you forget that. And of course he’s Italian, so I share that with him too. And just the idea, that “don’t forget that this great opportunity that I had to make a movie.”

I will never forget the opportunity that I had. And everything that went into that, the good, the bad, the ugly. Whatever con shell game I pulled off to get the opportunity, that doesn’t even matter. That I knew every moment of those 20 days that I was getting to make a movie, I couldn’t believe it.