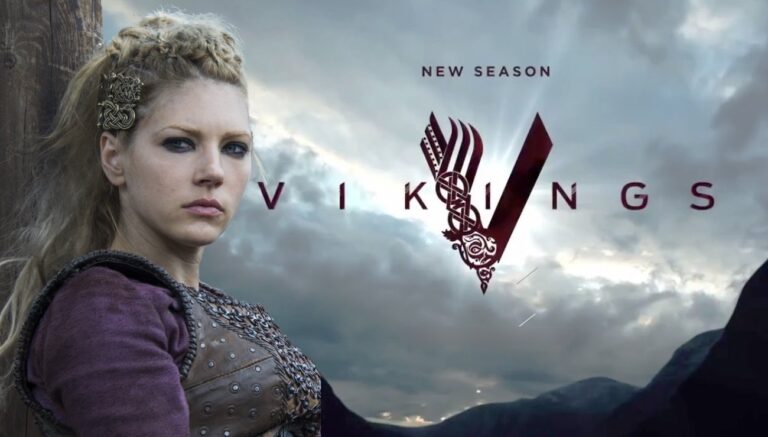 Katheryn Winnick is not only a stunning, talented actress, but she could probably kick your ass. She plays the strong-willed, powerful warrior Lagertha on History’s Vikings, but all that butt kicking isn’t just acting – Katheryn is an accomplished martial artist who holds a third-degree black belt in Taekwondo and a second-degree black belt in Karate.

Winnick can next be seen on the big screen in the highly anticipated adaptation of Stephen King’s The Dark Tower, with Matthew McConaughey and Idris Elba, but first fans can watch her return to Kattegat as Lagertha in Vikings Season 4B on Wednesday, November 30 at 9pm ET.

Winnick took time on a recent conference call with us (and other journalists) to discuss a new love interest for Lagertha, a reunion with Ragnar after the shocking time jump, and the big battles to come. You can check out the highlights below, but beware of mild spoilers.

On what is driving Lagertha at this point in her life:

Katheryn Winnick: Lagertha has always had a lot of different challenges. Throughout this season it’s been evident for her at this stage. Going into [4B], it’s really seeing how Kattegat is run and being extremely disappointed that it’s not ruled by the right ruler. With King Ragnar not necessarily being there and present as a king should be, and with Queen Aslaug running the show and not necessarily running it the proper way or the strongest way as a ruler to help the people.

And I think for her, her dream was obviously to expand two different territories and also make Kattegat one of the largest trading centers. It’s her dream and she saw the potential of it. So I think for her it’s a personal motivation, but her heart is in the right place in wanting to do good for her Viking people.

On filming the long anticipated reunion scene between Ragnar (Travis Fimmel) and Lagertha:

Katheryn Winnick: It was certainly a very intense scene just because I, as Katheryn, hadn’t worked with Travis in a long time before that, just because our story lines were very separate, so it’s great to get reunited again and be face to face and working together. And of course you really don’t fully know how it’s going to be until you shoot it, especially when you have such a gifted actor like Travis and you, yourself could be as prepared as you can be, but at the end of the day when you are there and in the moment, emotions arise and it is what it is.

On whether a recent flashback of Ragnar looking back on his family days with Lagertha was about regret:

Katheryn Winnick: What’s interesting about Ragnar’s character – and this is why Michael Hirst is such a great writer – is that easy as he is our hero of the show, in a sense he is the elite type in one hand, but in the other he is more of the antihero in the sense that he is not necessarily all put together and he has flaws. That fits in the matter of him taking mushrooms with his slave or not wanting to be king and him not necessarily being a good father or a good ruler. I think that’s what really makes it very interesting.

So that scene that we reshot, we remember going back and putting on the clothes from the previous seasons and we ended up having to recast my daughter, because since then, she became this gorgeous teenager, so we needed someone that was all same height and she was in the back, but that scene was really beautiful because even though he may not necessarily be able to be the man or go back in time to be that Ragnar, the husband that he wants to be in his mind, in his thoughts, in his dreams, he has a beautiful thinking that he cherishes that moment, and I know Lagertha does to, and Ragnar was her true love, and probably will always be.

On the coming clash between Lagertha and Aslaug:

Katheryn Winnick: Yes, there is definitely a big epic scene where Lagertha and Aslaug come face to face and I will say it’s pretty epic, it’s juicy and it’s memorable. I wish I could actually give away more, but it was a great scene to shoot. Lagertha felt that she needed to take Kattegat and really try to get control back. Kattegat is being run so badly and [there has] been a lot of problems with Kattegat, like people have been dying, things are not being run in a proper way as it should be, and she feels that she is doing the right thing by reclaiming it, because nobody would rule it better than she does, because she truly cares about her people. And so we had this great scene with Alyssa Sutherland who plays Aslaug and she is fantastic in it, and it was great to finally get face to face with her and Aslaug and Lagertha together.

On The Seer’s recent freak out and what that has in store for Lagertha:

Katheryn Winnick: The Seer is the Seer. You never know necessarily what’s going to come out of his mouth, but he’s kind of the modern day psychic I guess. Everyone goes to him to see the future and also for therapy and it’s interesting to see him in a different light and in a different animated state and especially with Lagertha.

I feel that she does have a scene with him – a really strong scene – where she goes to him and he gives her some devastating news that literally changes her for not only the rest of the season but the rest of her life and it’s a really big scene. And it’s really a big moment for him answering a certain question and I think that what he actually answered I don’t think will be expected. In every choice that I make as an actress, it is in the back of my mind. I think it’s something the audience wouldn’t necessarily expect.

Katheryn Winnick: There is a big time jump in Season 4B, Lagertha is in a different place now and she developed this relationship with Astrid, who Josefin Asplund plays, and it’s a relationship that she — Lagertha has been betrayed by so many men throughout her life – obviously Ragnar by cheating on her and asking her to be a second wife and then her second husband was abusive, and then Kalf, who she groomed, tried to use her up, and she had to kill him on her wedding day. So her relationship with men, I’m not sure it will change, I’m not sure she will ever trust a man again.

So it did make sense that she would find comfort in another human being and that that human being happened to be a woman and I don’t feel that Lagertha necessarily is a lesbian. I wouldn’t necessarily see that and I never really played it that way, but she did find a love with her that other men have never been able to give her.

Also, their relationship has been for over six, seven years and considerably she is very different and brings a breath of fresh air to Lagertha’s life, and Josefin has a lot of humor and wit and that’s evident in her character and especially her sense of style and her sense of the way she deals with Lagertha is unique and that was really a lot of fun to play.

So I think you’re going to like that relationship and I think Lagertha definitely grooms her to be the warrior that she is and it was nice just to see that it’s not necessarily, ‘Oh here are two women that are in bed together’, but there is a strong bond that is not necessarily the sexual part of a relationship, but more of an emotional bond that is evident and really beautiful to see.

On whether there is “grooming” or an endgame involved in Lagertha’s relationship with Astrid:

Katheryn Winnick: No, I don’t think there is any endgame. I think that she sees her as someone that is very comforting, but at this stage Lagertha truly feels alone, I feel, because of all the betrayal that she had. Even though she has Astrid, I’m not sure how emotionally close she is going to let anybody into her life and with Astrid there is no other motive other than caring for her. And she sees herself through her own journey and really trying to find her own path and own purpose in life at this stage and that’s why she ends up going back to Kattegat and approaches Aslaug.

On what fans have to look forward to with Lagertha and the action of upcoming battles:

Katheryn Winnick: Great question. You have to understand we are shooting right now, so we are so far beyond what you are about to see, I’m trying to refresh my memory. Yes, there is a very big battle coming up in [4B] and it’s one that’s going to be in the course of double episodes and it is in the history books and it is something that you wouldn’t expect and it is definitely epic. It’s powerful.

It’s a battle and you will see deaths, unexpected deaths. You will see challenges within the fight. You will see personal relationships getting tested, when they confront their enemies on the battlefield. And of course as an actor, for those scenes you try to be prepared as much as you can by knowing your fight choreography. Shooting in those elements of rain in Ireland, on a slop with mud, with horses, with axes, with blood, you kind of have to expect the unexpected and sometimes you find the real magic in those moments when you slip and fall and you pick up someone else’s axe because yours is gone, and everything is done a bit more sporadically.

When you see those battle sequences, it’s an opportunity to tell the story in a different way, and it’s also a way of sharing the story in the battles through the action element. And if it’s done well, which our crew is incredible in shooting those scenes and our stunt guys are incredibly talented and amazing to be able to fight against, they really give it their all and you can feel the heart going into it and understand how special this set really is, because it’s those moments that fill in the reality of us being Viking warriors.

And you can’t walk away from our set without getting banged up and you can’t walk away without being black and blue and full of cuts, it’s just part of the job and this job is not for everyone. This job is not for the divas or for the actresses that are going to be in the trailer, this is a really brutal guerilla shoot in a lot of ways, and you need a thick skin and you need to just go for it, and I think that’s what makes this job so special and I wouldn’t trade it for the world. I think that’s what makes me love being a Viking. It’s because it’s raw and it’s real. And some of those cuts that you see on camera are actually real blood, I’ll tell you that for sure.