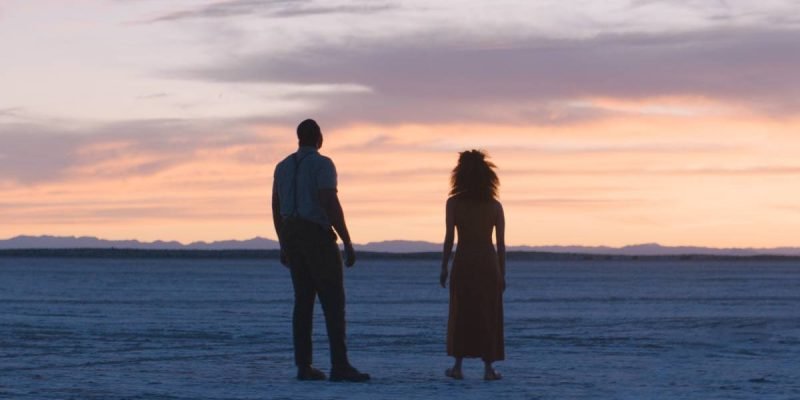 Edson Oda’s poignant drama about what it truly means to be alive centers on Will (Winston Duke), who spends his days in a purgatory-like space monitoring the lives of several different people through a wall of vintage television sets. He takes handwritten notes and captures particularly meaningful moments on VHS tapes, filing the information away in a storage room. Each screen represents a person that was handpicked by Will “for the amazing opportunity of life,” and when one of those lives comes to an end, Will is tasked with interviewing candidates to take their place.

The nine-day evaluation period which serves as the film’s namesake will introduce a variety of different souls, from the sensible Kane (Bill Skarsgård), who just wants to understand the rules of the assessment process so he can eclipse the other applicants, to the chummy Alex (Tony Hale), who’d rather have a beer and relax than contemplate anything even remotely uncomfortable or challenging. Then there’s Emma (Zazie Beetz), inquisitive and empathetic, more concerned about mending the damage to Will’s soul than finding a host for her own.

Bursting with originality and anchored by incredibly soulful (no pun intended) performances from Duke and Beetz, Nine Days is an exceedingly emotional journey, one that prompted me to immediately walk into the next room to embrace my wife and son. Thoughtful and self-assured, Oda’s feature-length debut is the hallmark of a tremendous new talent, and one of the most powerful films of the year.

Shadow in the Cloud

Auckland Allied Air Base, 1943. A B17 Flying Fortress christened “The Fool’s Errand” is preparing for takeoff when Flight Officer Maude Garrett (Chloë Grace Moretz) climbs aboard, with orders to transport a mysterious package. Met with vile insults and aggressive sexual harassment from the all-male crew — “I’ve got a package for you, sweetheart” — Maude is forced into the Sperry (the ball turret below the plane) and sealed inside for takeoff. As the plane soars over the South Pacific on its way to Samoa, a series of mechanical mishaps begin to occur, and the crew begins to wonder if they’re somehow connected to Maude’s top-secret cargo.

After introducing the players, director Roxanne Liang spends a solid forty minutes or so without ever cutting away from the turret — the other characters are heard over the radio, but we only see Maude, trapped in her glass and metal prison. As the men insult her, belittle her, and discuss the notion of defying orders to inspect the contents of her bag, Maude grows increasingly panicked by the sight of enemy aircraft in the clouds — and that’s before the gremlin shows up.

Yes, a gremlin: as if Maude didn’t already have her hands full, a grotesque fur-covered beast is gleefully tearing out the plane’s machinery. Naturally, when she tries to alert the rest of the crew, no one takes her seriously — after all, she’s a girl — and thus begins both a battle of the sexes and a battle for survival as Maude attempts to extricate herself from the Sperry, dodge incoming attacks from a trio of Japanese fighters and stop the creature from destroying the bomber. Liang’s film is a wildly off-kilter monster movie that genre enthusiasts should love, and although it doesn’t quite stick the landing (no pun intended) it’s so unabashedly original that it scarcely matters.

The Boy Behind the Door

Little League players Bobby (Lonnie Chavis) and Kevin (Ezra Dewey) are practicing in the park for the evening’s game against the rival team, but when an errant throw disappears into the underbrush, it sets off a horrifying chain of events that picks up hours later with the boys bound and gagged in the trunk of a car. Their unknown assailant pulls Kevin out and leaves Bobby to suffocate, but he manages to escape the confines of the vehicle and slip into the nearby house, where the sound of Kevin’s whimpering and pleading echoes through the air vents.

An unbelievably tense game of cat and mouse begins to play out, first between Bobby and a visitor that hands over a wad of cash to the home owner and is given the key to Kevin’s room, and then between Bobby and a kidnapper whose identity comes as a legitimate shock. Directors David Charbonier and Justin Powell, who co-wrote the screenplay, craft a tightly wound thriller that communicates volumes through visual imagery alone: when audiences see the attic, with the video camera pointed at the stained mattress and the shackles on the floor nearby, they don’t need to be told what danger awaits the boys if they can’t escape.

The Boy Behind the Door makes excellent use of the rickety old house, with its creaking floors and shadowy hallways, leading the environment to feel more like a character itself, rather than merely a setpiece. The filmmakers do an excellent job conveying a sense of claustrophobia, holding extreme close-ups as Bobby wedges himself into closets and crawls under beds to escape detection, and horror fans will appreciate a handful of visual nods to The Shining that are leveraged to great effect here. A solid debut for Charbonier and Powell that confronts some very challenging subject matter, without crossing the line and feeling exploitative.