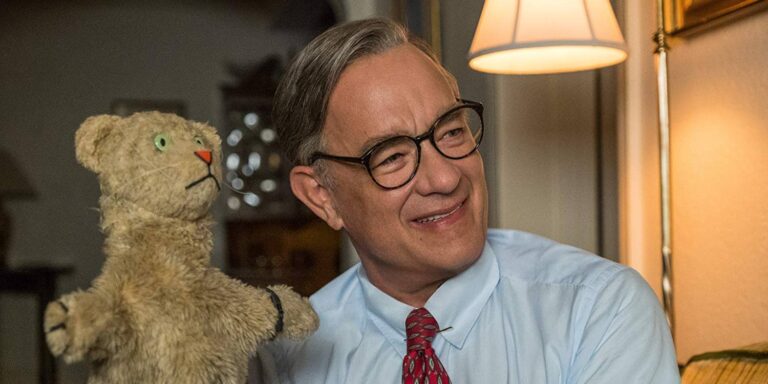 For an in-depth look at the life and legacy of Fred Rogers, the beloved host of long-running children’s show Mr. Rogers’ Neighborhood, you can’t do much better than Morgan Neville’s stellar 2018 documentary Won’t You Be My Neighbor? But for a more concise distillation of the man’s character and the way he impacted nearly ever life he touched, A Beautiful Day in the Neighborhood gets the job done thanks to Marielle Heller’s gentle direction and an endearing performance from America’s Dad himself, Tom Hanks.

The film opens in remarkably charming fashion with a painstaking recreation of Mr. Rogers’ Neighborhood: there’s Hanks opening the door, donning the sweater and pulling off his sneakers, all while singing the familiar theme song. Much like the original series, this sequence (presented in 4:3 ratio) looks decidedly low-budget, as if shot on video, and Heller uses it as something of a framing device as Mr. Rogers introduces the audience to Lloyd Vogel (Matthew Rhys), a journalist whose photo indicates he’s seen better days. “Someone has hurt my friend Lloyd,” Mr. Rogers tells us, and it won’t be long before we learn just what happened.

The character of Vogel is based on real-life Esquire writer Tom Junod, whose assignment to profile the TV host in 1998 led to a friendship that endured until Rogers passed away in 2003. A Beautiful Day in the Neighborhood tells how that bond began to take root, as a skeptical writer with a history of turning friendly interviews into scathing hit-pieces is frustrated by his inability to dig up any kind of dirt on his subject. Vogel is also irritated at Rogers’ particularly disarming manner of speaking — so calm, so inquisitive — and his almost mystical ability to turn the tables (ever so gently, mind you) and get Vogel to open up about the troubles in his own life. The writer’s exasperation gradually gives way to a sense of wonder, as Vogel gradually realizes there’s no separation between Fred Rogers the man and Fred Rogers the TV personality.

As we discover more about Vogel and his tumultuous relationship with his philandering father (Chris Cooper), Heller frequently jumps back to the “episode” which serves as the film’s throughline. Shortly after learning about Vogel’s profession, Rogers presents the audience with a segment about the production of magazines, and after we witness an argument between Vogel and his father erupt into violence, Rogers talks to us about appropriate responses to our emotions. “Have you ever been so angry you wanted to hurt others?” he asks. The juxtaposition of pristine HD footage with grainy, flatly lit “video” can sometimes feel a little jarring, but these clever little asides are so delightful that we don’t really mind the back-and-forth.

Having already portrayed Walt Disney, another figure instrumental in the shaping of so many childhoods, it only makes sense that Hanks would be tapped for this role, and let’s be honest: who else could have pulled it off with such aplomb? Hanks is next-level great as Rogers, perfectly capturing his mannerisms and eccentricities, his genuine warmth toward everyone around him, and the unmistakable voice that emanated from so many television sets for decades. A Beautiful Day in the Neighborhood captures the very essence of Fred Rogers, and although viewers who’ve never had the pleasure of watching an episode of the series are still likely to find themselves enamored with Hanks, anyone who ever looked forward to seeing Daniel Striped Tiger or Lady Aberlin will find Heller’s tender, uplifting tribute to be an absolute delight.