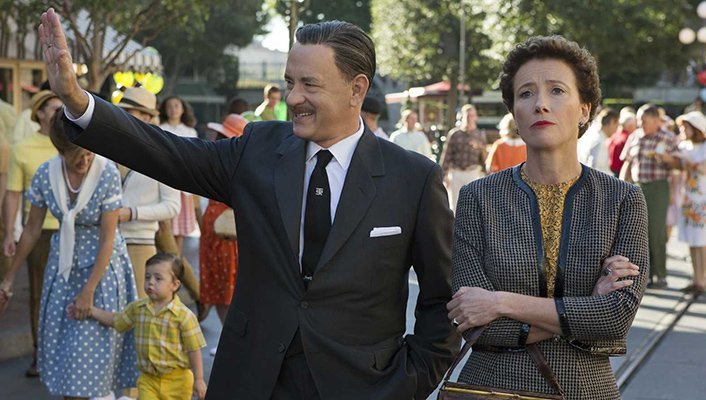 Mary Poppins is fondly remembered today as one of Walt Disney’s greatest achievements, a timeless classic whose charm and wonder has endured for generations. But long before Julie Andrews and her magic umbrella flew across the silver screen, another tale unfolded behind the scenes, and it’s this tale that serves as the basis for Saving Mr. Banks.

Helen Goff grew up in rural Australia, the oldest of three daughters born to a father (Colin Farrell) who frequently eschews the responsibilities of adulthood in favor of imbibing whiskey and conjuring up fantastical stories to entertain his little ones. He instills in Helen a sense of whimsy, insisting that she never allow herself to grow up and become an adult – a sentiment that another classic Disney character might agree with.

Some sixty years later, the imaginative little girl has become celebrated author P.L. Travers (Emma Thompson), with nearly all traces of warmth and humor evaporating along the way. Financial ruin looms on the horizon, and Travers is forced to consider an offer from Walt Disney (Tom Hanks) to purchase the film rights to Mary Poppins – a notion Travers has avoided for two decades, horrified by the idea of her creation “cavorting and twinkling” in front of audiences.

As Travers spends two weeks in the Disney production studios with screenwriter Don DaGradi (Bradley Whitford) and composers Richard and Robert Sherman (Jason Schwartzman and B.J. Novak), her ridiculous list of demands (including her insistence that every conversation and production meeting be recorded) and her complete unwillingness to compromise provide plenty of humorous moments. Indeed, even Disney himself teeters at the edge of exasperation, forced time and again to give up ground in effort to keep the film moving forward.

But as we juxtapose between these scenes and events from the author’s childhood, we begin to understand that Travers isn’t being difficult just for the sake of being difficult – there’s a very personal connection here, and director John Lee Hancock expertly correlates the emotional impact of Travers’ experiences with her attachment to the characters she created. There are more than a few moments that will leave audience members misty-eyed, but these moments reveal themselves organically, never coming across as forced or disingenuous.

Thompson is superb as the prim and proper British dame, firing off snappy dialogue laced with sardonic wit, but it’s Hanks that truly shines here, capturing Disney’s charisma and creativity and reminding us why the studio magnate has remained a beloved, iconic figure in pop culture for so many years. Saving Mr. Banks isn’t quite the biopic fans have been clamoring for, but it’s a rare glimpse at the man behind the magic – and the woman responsible for one of his most memorable accomplishments.