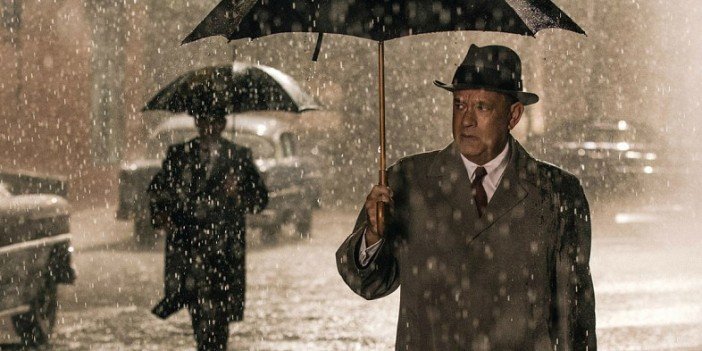 Without a doubt, Steven Spielberg is one of the very top few of the most prolific filmmakers in cinematic history. This is an objective, inarguable fact – if you know someone who hates his films, you should probably call the NSA and have that person put on a watch list. Though he was partly responsible for the Indiana Jones 4 debacle, every other film he’s made in this writer’s memory has been thrilling, heartwarming, thought provoking, expertly crafted, or all of the above.

Which is why it’s going to be a shock when you read the following statement: Bridge of Spies is the best film Tom Hanks and Steven Spielberg have been a part of since Saving Private Ryan. “Well, that’s a tall order, sir,” you may be thinking to yourself. Go see this film and you’ll understand.

Set in the late 1950s and early 1960s in the height of the Cold War, Bridge of Spies tells the story of James Donovan (Hanks), a mild-mannered insurance claims lawyer who is drafted by the US Government to defend captured Russian spy Rudolf Ivanovich Abel, adroitly portrayed by Mark Rylance (The Other Boleyn Girl). Things, as they were wont to do during the Cold War, go awry, and Donovan is tasked with exchanging Abel for downed Spyplane pilot Francis Powers, played by Austin Stowell (Whiplash).

Throughout the course of the film, viewers are treated to the thrilling twists and turns you’ve come to expect from a Cold War-era spy drama, but thanks to the performance by Hanks and an outstanding script penned by the brothers Joel and Ethan Coen (along with Matt Charman), you won’t feel like it’s something you’ve already seen a thousand times. Spielberg has assembled a perfect period drama, as he has done in the past, and some of the camera work and effects are Tim-and-Eric level mind-blowing. The entire film is gorgeous, and there is a ton of noticeable Spielbergian flair throughout the movie’s two hour and twelve minute runtime.

I know it’s sacrosanct to say, but forget about Tom Hanks for a moment. No, really – we can come back to him later, but the thing that the Academy will be talking about the most is the portrayal of insouciant Russian Agent Abel. Mark Rylance’s perfectly cool demeanor while playing a man who is to be executed, mixed with the chemistry he has with Hanks, lead to some of the most memorable scenes in the past several years of Hollywood films. The juxtaposition of Powers’ and Abel’s dire situation with the laugh-out-loud dialogue between Rylance and Hanks lends much-appreciated levity to a script that could have been bogged down with spy movie tropes and bleak, depressing Cold War Era content. You almost immediately forget that Abel was in the USA to collect intelligence in order to help Russia in case they decided to annihilate all life in the Western Hemisphere. It may be strange to say this about a grown man, but his character was downright adorable.

But back to Hanks, as promised. He’s so perfect here, taking a familiar “fish out of water” character trope and adding so much humanity to it that you forget that you hate “fish out of water” stories. From New York City, to Washington DC, to East Berlin, his character’s transformation is both scripted and acted superbly. Not to leave her out of this review entirely, Amy Ryan does a fantastic job portraying wife Mary Donovan as well, though she has a smaller role.

Keep an eye out durings awards season, folks. Bridge of Spies all but guarantees that Spielberg, Hanks and Rylance will be in the mix in every category they’re allowed to be nominated for.

Perfectly balancing emotional gravity with heartwarming levity, do not miss this thrill-a-minute suspense film with outstanding performances by Tom Hanks and Mark Rylance.