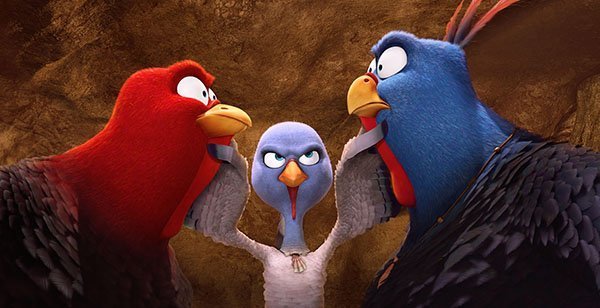 While there are plenty of animated films involving time travel, Free Birds is the first (and quite possibly the last) to populate the adventure with anthropomorphic turkeys, whose quest involves rewriting history in an attempt to keep their feathered brethren off the dining room table on Thanksgiving. After being pardoned by the President of the United States in a bizarre annual tradition, Reggie (Owen Wilson) is living the good life at Camp David, until he finds himself unceremoniously kidnapped by Jake (Woody Harrelson) and whisked away in a government-developed time machine to the date of the first Thanksgiving feast.

Jake’s plan involves banding together with their Colonial Age counterparts to fight back against the settlers, led by real-life historical figure Myles Standish (Colm Meaney) as they attempt to hunt down every turkey in the area in preparation for the first big feast. Watching the turkeys don headdresses and war paint as they square off against the colonists feels a bit uncomfortable, and with the birds frequently painted as less than intelligent, the metaphor is more insulting than effective.

Free Birds isn’t without its laughs (many provided by George Takei as the voice of the aforementioned time machine and Amy Poehler as Reggie’s love interest), but the jokes fall flat more often than not, and the ones that work are too few and far between to keep the humor flowing with any kind of consistency. The Blu-ray release is about as mediocre as the film itself, with most of the featurettes running less than five minutes and none of them being particularly interesting. But the film looks great, and the bright colors and fast-paced action will keep younger children entertained, even while their parents are checking their watches.