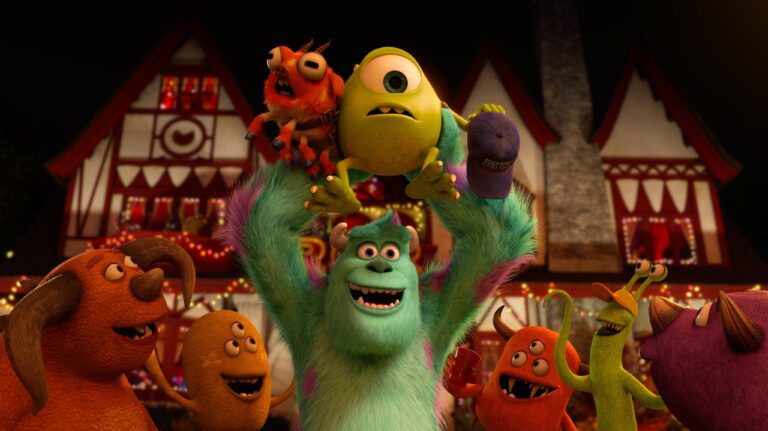 Prequels to beloved movies always have the danger of soiling a fanbase’s love of the original or simply feeling like a cash grab to exploit the success of the previous installment. Thankfully certain studios like Pixar tend to restrain themselves from moving forward with additions to their franchises until they have the right story or take to do so. Twelve years after Monsters Inc. captured the hearts of audiences everywhere, Monsters University hit screens and reminded everyone why they loved this world and why Pixar still has plenty of magic left. [pullquote_right]The thing that really worked for me in Monsters University is how it captured the spirit of the original but totally changed the genre of the film.[/pullquote_right]

With the release of Monsters University on Blu-ray/DVD, audiences can now dig even deeper into the world of MU or experience it for the first time and fall back in love with Sulley and Mike Wazowski. The thing that really worked for me in Monsters University is how it captured the spirit of the original but totally changed the genre of the film.  I have to confess to being a huge fan of the “college film” and classics like Revenge of the Nerds and Animal House are all paid tribute on the campus of MU.

Monsters University smartly takes advantage of the prequel idea by adding some real insight into what shaped the friendships and careers of Mike Wazowski (Billy Crystal) and James P. “Sulley” Sullivan (John Goodman). Far too often prequel films try to get too cute by adding one too many coincidences or cameos referencing the original movie, but Monsters University finds a great balance between new and old, building off the first film but not riding its coat-tails. Characters from Monsters Inc. that wouldn’t make sense to be in this story do not show up, while a large crop of new characters are introduced to fill that void.

[pullquote_left]Charlie Day (It’s Always Sunny) as Art is one of the most hilariously genius looking designs in the “Monsters” universe.[/pullquote_left]In addition to the returning Billy Crystal, John Goodman and Steve Buscemi, the main monsters run into a great gaggle of new monstrosities. Helen Mirren is icy cold as Dean Hardscrabble, the “evil authority figure” that tends to be the antagonist in college comedies, and probably has the most legitimately scary design of any of the monsters in either film.

In similar fashion, Nathan Fillion perfectly embodies the rival fraternity leader Johnny with the smarm and aloofness fans have come to love from his work. I could spend an entire article just breaking down all the great cast performances and characters but will refrain for the sake of this review’s length. But I have to make mention of my personal favorite because Charlie Day (It’s Always Sunny) as Art is one of the most hilariously genius looking designs in the “Monsters” universe.

Most of my complaints about the film are small, revolving mostly around nitpicks with the script. The foremost issue being that Monsters University almost follows the “college film” tropes too closely, resulting in the plot becoming fairly predictable. Sure, it’s fun to see how Monsters University spins those kind of classic college moments but Monsters Inc. had the element of unpredictability with its story, rather than being shackled by paying homage to a genre. Which is also a problem inherent with prequels, because audiences know the real characters are never in any danger and will remain, for the most part unscathed, in order to line up with the original. [pullquote_right] Blu-rays don’t get much better than the audio/video provided in Monsters University.[/pullquote_right]

Monsters University looks absolutely jaw-dropping on Blu-Ray with so many eye-popping colors and designs populating the campus life at MU that it almost demands repeat viewings. From the autumn leaves of all the trees (that look more like rainbow colors than autumn) to classic architecture of east coast universities given a “Monsters” makeover, there’s so much to see and take in and it’s all complemented by a top notch audio presentation. Blu-Rays don’t get much better than the audio/video provided in Monsters University, making the film immediately the head of class for any demo you want to run on your system for friends.

[pullquote_left]Pixar’s first prequel is one of the few times a prequel has actually worked in concept and execution.[/pullquote_left]The special features are almost as impressive and there’s a ridiculously awesome amount to choose from but with some redundancy and varying quality. Highlights include Blue Umbrella, a short with some extremely neat visuals in a sweet story that is a staple of Pixar films: love between normally inanimate objects. There’s also audio commentary from director/co-writer Dan Scanlon, producer Kori Rae and story supervisor Kelsey Mann that’s complemented with quite a few 5-10 minute videos chronicling the behind the scenes work developing and creating Monsters University. There’s also four fun deleted scenes with an alternate take on Mike and Sulley’s meeting and some more hijinks around campus.

Pixar’s first prequel is one of the few times a prequel has actually worked in concept and execution. While it might not quite live up to Monsters Inc., the loving skewer of “college films” certainly has earned Monsters University a place in my heart as one of my personal favorite Pixar films. The Blu-Ray treatment is extremely top-notch and I’m not sure anything has looked more impressive all year. Throw in a heaping supply of special features that will keep kids and adults occupied for quite a while after viewing the film, Monsters University should graduate at the top of your must-buy Blu-Ray list.