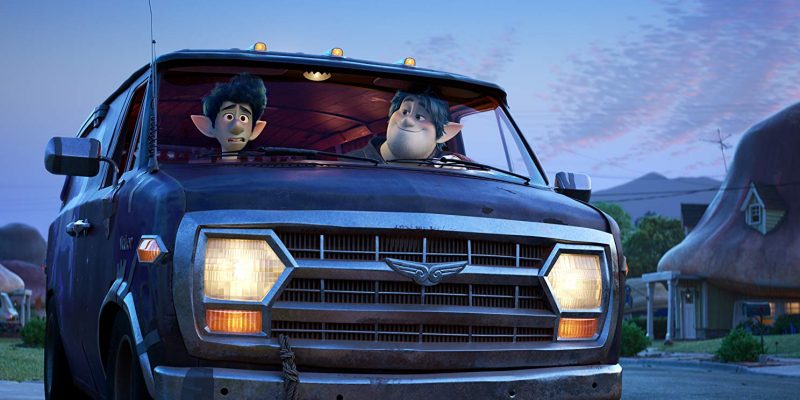 Despite what Sonic the Hedgehog might have you think, family films don’t have to be full of bad jokes, cringe-worthy dialogue and product placement. They don’t have to be aimed squarely at the little ones, either: Disney Pixar has a long history of crafting gorgeous animated films that appeal to younger viewers while still offering well-written characters and emotional stakes that adults can latch onto. Their latest effort, the fantasy adventure Onward, continues the studio’s tradition of crafting family films that actually work for the entire family.

Opening with sweeping views of rolling hills and lush forests populated by unicorns, trolls and centaurs, we learn the world was once a magical place — literally. But times change, and with the development of technology, the world had little need of wizards and spellcasters, and the arts slowly faded away into legend. Now, the same unicorns that once roamed the open plains scavenge food from overturned trash cans, and the elves, ogres and cyclops have become accountants, police officers and fitness instructors.

Onward centers around Ian (Tom Holland), an awkward and introverted elf celebrating his 16th birthday. His older brother, Barley (Chris Pratt, doing his best riff on mid-2000s Jack Black) is the quintessential metalhead archetype: he wears denim vests emblazoned with band logos, drives a beat-up van with a mural painted on the aide, and is obsessed with a Dungeons and Dragons-esque tabletop roleplaying game called Quests of Yore, which he insists is “historically accurate.” When their mother (Julia Louis-Dreyfuss) surprises Ian with a birthday gift from his father, who passed away before he was born, the boys are shocked to discover a wizard’s staff and an incantation promising to bring Dad back for an entire day.

Unfortunately, magic spells are a bit difficult to master, especially for a novice, and Ian only succeeds in resurrecting Dad’s bottom half. With less than 24 hours to go until the magic fades, the boys embark on a journey– with a Quests of Yore campaign serving as a blueprint — to track down a legendary artifact that will allow them to complete the spell. But with a fearsome manticore (Octavia Spencer), a gang of motorcycle-riding sprites known as the Pixie Dusters and a sinister curse standing in their way, Ian and Barley’s quest promises to be nothing short of epic.

Onward has a blast poking fun at well-known fantasy tropes, and some of its jokes may be lost on viewers that aren’t familiar with the genre, but the film is at its best when exploring the relationship between Ian and Barley. The chemistry between the leads is wholly believable, with Holland’s anxious energy proving a great match for Pratt’s exuberance, and every time the latter’s metalhead slacker schtick seems on the verge of becoming overbearing, director Dan Scanlon reels it back in with a quieter, character-focused moment.

The film’s climax is a little bloated and overcooked (but does contain an absolutely brilliant sight gag involving a dragon), and although Onward features a handful of tear-jerking moments, it doesn’t quite pack the emotional gut-punch of recent Pixar efforts like Inside Out and Coco. It’s a fun and mostly lighthearted romp, with a great sense of humor, just don’t expect it to rank among the studio’s upper echelon.