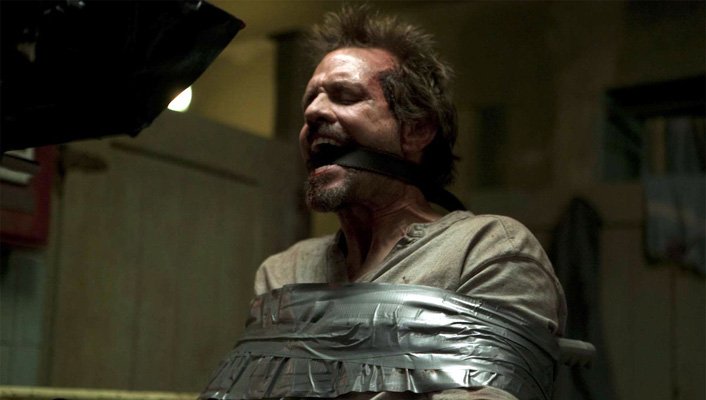 As nuclear bombs decimate the city, a group of tenants flee to the fallout shelter in the basement of their building. Trapped and frightened, the survivors turn to superintendent Mickey (Michael Biehn), whose cagey behavior and violent outbursts leave the rest of the group mistrustful of their new host. But that’s nothing compared with the horror that waits on the other side of the door, and when a HAZMAT team breaches the shelter and prepares to open fire, the survivors are left with no choice but to retaliate.

[pullquote_right]Director Xavier Gens takes us to the very limits of darkness and depravity.[/pullquote_right]The acquisition of advanced weaponry and survival suits serves only to increase the tension, and as food and water become scarce, hostility erupts. Convinced that Mickey has been withholding supplies from the group, Josh (Milo Ventimiglia) and Bobby (Michael Eklund) band together to tip the balance of power and establish themselves as the new leaders. As the boys use their new position of influence to assert their dominance, the remaining survivors realize that they’ve simply traded one evil for another, and no one is prepared for what happens next.

[pullquote_left]You’ll almost certainly need a palate cleanser by the time the credits roll.[/pullquote_left]With The Divide, director Xavier Gens takes us to the very limits of darkness and depravity, delivering a film that is uncomfortable, disturbing, and riveting, thanks to the performances from the impressive ensemble cast. Biehn, Ventimiglia, and Eklund are all at the top of their game here, and Lauren German keeps the audience grounded as the altruistic Eva, who refuses to be corrupted by the horror around her.

The video transfer features a muted color palette with plenty of grey and brown textures, which reflects the overall bleak atmosphere of the subject matter. Detail is strong, with every bit of dirt, dust, and filth carefully rendered. The 7.1 audio track is well-utilized, with plenty of ambience and a haunting score that never overpowers the dialogue.