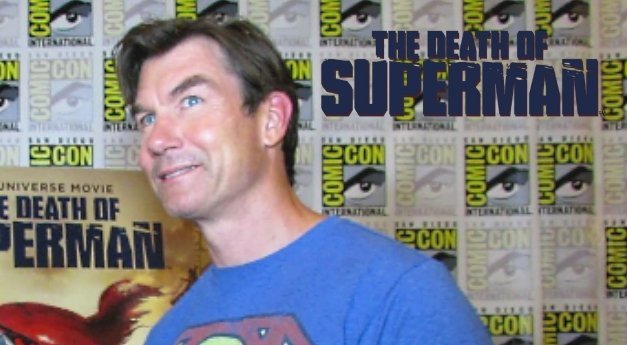 The Death of Superman story has already been told once in animated movie form, but the team behind the DC Universe Animated Films wanted another crack at this iconic event. This time out they incorporated the continuity of the current Justice League animated films and Jerry O’Connell gets his shot at playing the Big Blue Boyscout in his most heroic and dire confrontation ever.

We talked one on one with O’Connell himself in the press room for The Death of Superman at Comic-Con 2018 where he shared his love for the character, sharing the animated screen with his real life wife Rebecca Romijin, and the emotional punch of the film.

Watch all the Superman goodness via our YouTube page in the video below:

Now check out the man in action via the trailer for The Death of Superman below:

The Man of Steel meets his ultimate match when Doomsday comes to Earth – hell bent on destroying everything and everyone in his path, including the Justice League – in the all-new, action-packed The Death of Superman, part of the popular series of DC Universe Movies. Produced by Warner Bros. Animation and DC Entertainment, the feature-length animated film arrives from Warner Bros. Home Entertainment on Digital starting July 24, 2018, and on Ultra HD Blu-ray™ Combo Pack, Blu-ray™ Combo Pack and DVD August 7, 2018.