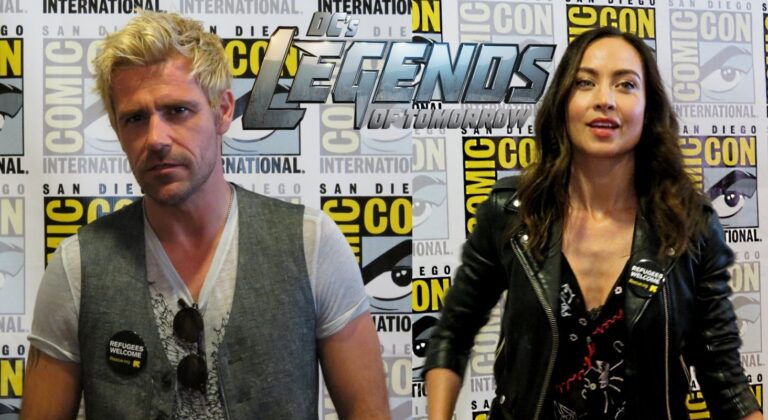 Legends of Tomorrow has soldified itself as the Arrow-verse’s most out there and most fun show – anything can happen and usually does. After the unforgettable final clash featuring Beebo vs Mallus, we last saw the Legends interrupted on their much deserved vacation by Constantine (Matt Ryan) delivering the dire news that their battle had opened the way for magic and demonic threats to escape to Earth.

Nerd Rep got invited to take part in the roundtable press interviews at Comic-Con 2018 and we sat down with Matt Ryan (Constantine) and Courtney Ford (Nora Darhk) to get the lowdown on what kooky, magical madness Legends of Tomorrow Season 4 has in store for their characters.

Praise Beebo and check out the full interview video via our YouTube page below:

Now that Matt and Courtney have cracked you up with their hilarious interview skills you can check out first hand what they’re talking about from the official trailer for Season 4 that debuted at Comic-Con 2018 below:

The carefree time travelers of DC’s Legends of Tomorrow will welcome two new faces as they set out to hunt temporal Fugitives in the show’s fourth season (Mondays 9/8c The CW this fall). The casting news was announced in the series’ Comic-Con panel session this afternoon.

Based on the characters from DC, DC’s Legends of Tomorrow is from Berlanti Productions in association with Warner Bros. Television. Executive produced by Greg Berlani, Phil Klemmer, Keto Shimizu and Sarah Schechter, the series returns for season four on Monday, October 22, at 9/8c on The CW.