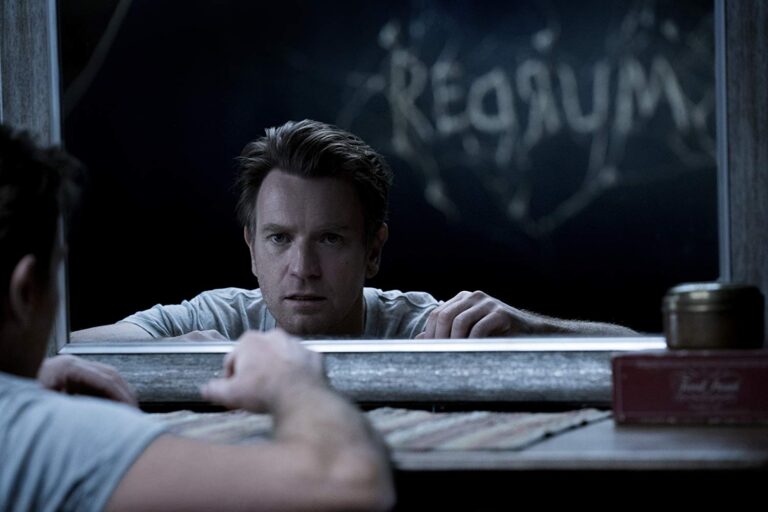 Film critics, connoisseurs and historians may disagree on many fronts, but one universally accepted truth is that Stanley Kubrick’s 1980 horror film The Shining is a masterpiece. Though it differs wildly from the novel by Stephen King (so much that the author has long expressed his distaste for the adaptation), it’s nevertheless an iconic piece of cinema, and the interiors of the Overlook Hotel — the cavernous atrium where Jack Torrance sat at his typewriter, or the hexagon-patterned hallways where young Danny Torrance rode his tricycle — have become instantly recognizable pieces of pop culture.

Director Mike Flanagan is banking heavily on that familiarity, opening Doctor Sleep with a recreation of Danny’s trek through the corridors of the Overlook, pausing to stare trepidatiously at Room 237. Despite their escape from the hotel and subsequent relocation to Florida, Danny and his mother are still haunted by the events that took place here. In Danny’s case, that haunting is more than figurative: the same spooks and spectres that tormented him in Colorado are still popping up to scare the bejesus out of him on the other side of the country. But an otherworldly visit from the deceased Dick Hallorann (Carl Lumbly) teaches Danny how to lock these malevolent phantoms away in his mind, and soon life returns to normal.

For a time, at least. When we catch up with the grown-up Dan (Ewan McGregor) some three decades later, he’s on a downward spiral of booze and drugs, getting into bar fights and waking up with women whose names he’s already forgotten. Checking into a small-town New Hampshire rooming house and going to AA meetings, Dan lands a job as an orderly in a hospice center, where he uses his psychic abilities — which he calls “the shining” — to ease the fears of patients about to crossover to the other side. He also begins a telepathic penpal relationship with Abra (Kyliegh Curran), a 13-year-old girl whose incredibly powerful “shine” attracts the attention of Rose the Hat (Rebecca Ferguson), leader of a cult-like band of drifters that murder psychic children and feed on the essence that escapes their bodies during death.

McGregor is excellent here, naturally, and Curran shows impressive range as she gradually becomes the focal point of the film during the latter half. Emily Alyn Lind also shows up as a silver-tongued teenage seductress with a penchant for mutilating pedophiles, and Westworld‘s Zahn McClarnon is wonderfully sinister as the cult’s second-in-command. But it’s Ferguson who shines the brightest — no pun intended — as Rose, morphing from a serene, sensual hippie vagabond to a devilish, rage-filled murderess at the drop of a fancy magician’s hat. Ferguson is positively electric in every scene, and her performance alone makes Doctor Sleep‘s somewhat arduous runtime worth the investment.

Flanagan expertly balances the horrific elements of Doctor Sleep — such as the kidnapping and torture of a Little League star (Room‘s Jacob Tremblay) to satiate the hunger of Rose and her brood — with somber, contemplative moments, like Dan sitting at the bedside of a dying patient and ruminating on what happens when the lights finally go out. He also pays frequent tribute to Kubrick’s film, emulating camera movements and working in bits of The Shining‘s original score, ensuring the Overlook Hotel is never far from our minds — which makes the third act all the more enticing when Dan guides his car onto the winding mountain road toward the location that terrified him as a child.

Bold though it may be, the decision to stage Doctor Sleep‘s climax in the abandoned, crumbling husk of the Overlook feels like dangerous ground to tread, and it’s the sort of thing that could easily have fallen flat. But Flanagan — who sought the approval of Stephen King himself to evoke Kubrick’s film in such a massive way — knocks it out of the park here, leveraging the familiar locales to great effect. A conversation between Dan and the ghostly bartender is surprisingly touching despite the surrounding air of melancholy, and watching the adult Dan shuffle into the bedroom where his father smashed through the door with a fire axe is positively goosebump-inducing.

Much like The Shining, Flanagan’s Doctor Sleep diverges from its source material, yet manages to be a more faithful adaptation than the former, despite its ties to Kubrick’s own canon. From a logistical standpoint, the film shouldn’t work nearly as well as it does, and it’s almost baffling how neatly it all comes together. It’s a cinematic magic trick of sorts, and Flanagan pulls it off with the confidence of someone performing an illusion for the thousandth time.