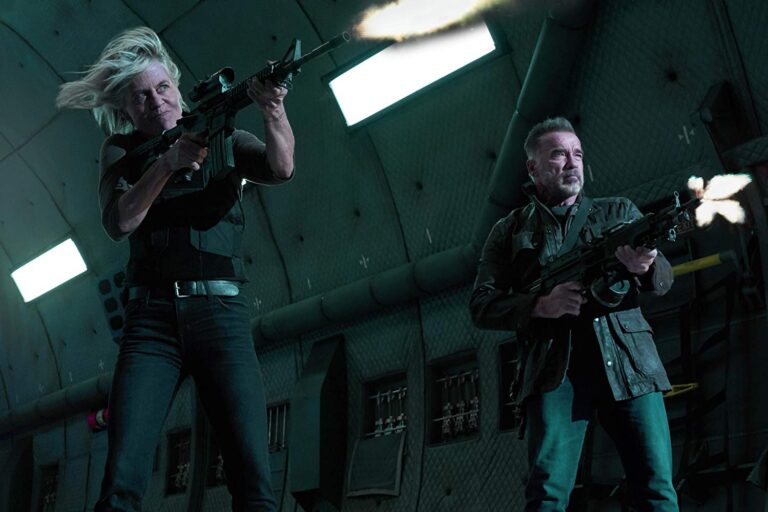 After multiple disappointing entries over the past couple of decades, you wouldn’t expect the latest installment of the Terminator franchise to warrant much excitement. But unlike the past three films, which include 2015’s abysmal Terminator: Genisys — arguably the lowest point in the series — Terminator: Dark Fate leverages two key ingredients that have been missing since 1991: series creator James Cameron and his magnetic leading lady, Linda Hamilton.

Reprising one of her most iconic roles after a 28-year absence, Hamilton’s Sarah Connor sets the stage, informing us (via voiceover) the future she had been warned of, where the machines rose up against humanity in August of 1997, never happened. Her actions during the events of Terminator 2: Judgment Day prevented the creation of Skynet, but that doesn’t mean she thwarted the conflict between humans and machines entirely. It may have taken longer to manifest, and the artificial intelligence at the center of it all may have a different name, but it wouldn’t be a Terminator film without a devastating war, a murderous machine from the future, and a courageous soldier to protect its target.

This time, it’s Dani Ramos (Natalia Reyes) on the hit list, stalked relentlessly by the Rev-9 (Gabriel Luna), a hybrid of sorts that features a solid endoskeleton covered by a layer of liquid metal, which affords it the ability to split into two separate entities and approach its target from multiple angles. But as the Rev-9 descends on Dani and her brother (Diego Boneta), help arrives in the form of Grace (Mackenzie Davis), an augmented human from the future tasked with keeping Dani out of harm’s way. Battling across the auto factory where Dani and her brother work, Grace and the Rev-9 trade blows until she’s able to subdue it long enough to escape in a stolen truck, leading to a frantic freeway pursuit that echoes one of the best sequences from Judgment Day.

As the Rev-9 closes in, Sarah Connor enters the fray with an assortment of high-powered weaponry. Her arrival, accompanied by the franchise’s instantly recognizable main theme, is a bona fide goosebump-inducing hero moment, and seeing Hamilton decked out in tactical gear and brandishing a rocket launcher is damn near euphoric. The years haven’t diminished Sarah’s lethality, but they’ve gifted her with a sardonic wit that makes for a good counterbalance to Grace’s no-bullshit demeanor, and both Davis and Hamilton seem to relish the tension-filled moments they share.

That Dani, Grace and Sarah will continue to be stalked by the Rev-9 is a given, but the journey takes them to some unexpected locales, including a detention center operated by the US Border Patrol and a secluded Texas cabin owned by the proprietor of a drape-cleaning service. That Arnold Schwarzenegger also returns is no secret, but the premise under which that return occurs is a masterful bit of storytelling and one of Dark Fate‘s most interesting plot developments. Thankfully, director Tim Miller is smart enough to keep the focus on our heroines rather than putting Schwarzenegger at center stage, and the back half of the film is better because of it — Arnie’s here to serve the narrative, and that narrative is squarely centered on Dani, Grace and Sarah, as it should be.

Terminator: Dark Fate is at its best during its quieter, character-focused moments, which can likely be attributed to the involvement of producer James Cameron, taking a hands-on involvement in the series for the first time since 1991. Things get a bit messy during some of the larger action sequences, where rapid camera cuts and excessive use of CG result in muddled visuals. On more than a few occasions, it’s difficult to discern exactly what the hell is going on, especially during scenes that are staged at nighttime or in dimly lit conditions, which just so happens to be the bulk of the film’s third act. It’s a major flaw that detracts from the overall experience, but the cast is strong enough — particularly Hamilton and Davis — that we’re willing to endure these shortcomings.

To call Terminator: Dark Fate the best film in the series since Judgment Day wouldn’t be inaccurate. In fact, as far as the mythology is concerned, it’s the ONLY franchise entry since then: Cameron has disavowed those other stories completely, and as the de factor third chapter in the story of Sarah Connor, this is a very worthy continuation of her journey. Thanks to its surprisingly smart script and a captivating turn from Hamilton, Dark Fate puts the series on the road to redemption.