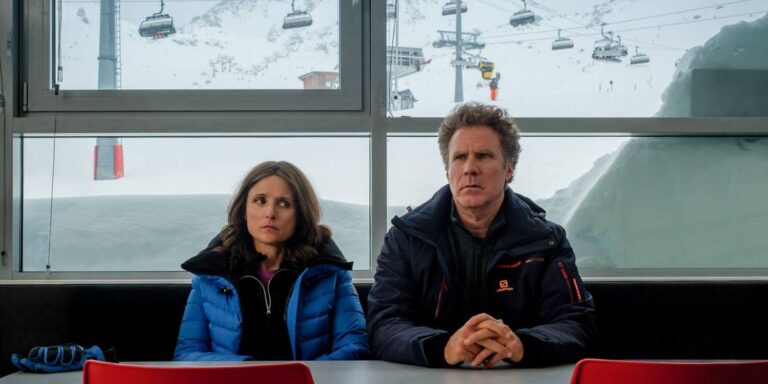 Adrift in the complacency of long-term marriage, Pete (Will Ferrell) and Billie (Julia Louis-Dreyfus) embark on a vacation to an upscale European ski resort with their two boys, both of whom would rather be watching videos on their iPads instead of zipping down the slopes. When an afternoon lunch on the patio is interrupted by a controlled avalanche that looks suspiciously out of control, Pete grabs his cell phone and flees the scene, while Billie shields the children from the onslaught of snow that comes tumbling down.

Written and directed by Jim Rash and Nat Faxon (The Way Way Back), Downhill is an American remake of Ruben Östlund’s stellar 2014 film Force Majeure. The setup is largely the same: Pete’s focus on self-preservation and disregard for his family’s safety in the face of imminent danger is the catalyst for the rapid deterioration of his relationship with Billie, especially when he refuses to acknowledge that he committed any wrongdoing. Of course he didn’t run away — “you can’t run in ski boots,” he explains — he was merely going to find help.

As Billie’s fury continues to percolate, Pete’s social media obsession with a younger co-worker (Zach Woods) and his adventurous girlfriend (Zoe Chao) currently traveling through Europe culminates with Pete inviting the couple to visit them at the resort. Billie grits her teeth and agrees to go along with the notion, until Pete recounts his version of events and tries to wave away the impact of the avalanche on her and the children, and she finally unloads on him. In the original film, this sequence was deeply uncomfortable, but Downhill manages to turn this confrontation into something hilarious.

In fact, Rash and Faxon utilize this same approach for the bulk of the film, mining humor from the awkward and discomfiting scenarios in which Pete and Billie frequently find themselves embroiled. Of particular note is a scene where Pete tries to surprise the family with a day of heli-skiing: he’s patting himself on the back for an idea that no one else seems to care about, and when the boys start bickering and Billie steps in to mediate, things quickly go off the rails. Elsewhere, Pete takes the boys to a neighboring ski resort with more family-oriented activities, where his competitive nature undermines his attempts to reconnect with his children; and Miranda Otto frequently pops up as a frank, free-spirited concierge, openly discussing her sexual conquests and urging Billie to engage in some extramarital fun with a handsome ski instructor (the way Louis-Dreyfus handles this material is absolutely brilliant).

At a scant 85 minutes, Downhill is noticeably shorter than its predecessor, and although it boasts many of the same ingredients as Force Majeure, the filmmakers seem keen on preparing a recipe that emphasizes different flavors, turning cringe-worthy moments into opportunities to elicit chuckles. Ferrell is quite funny in an understated role devoid of his typical over-the-top antics, and Louis-Dreyfus turns in a multi-layered performance as the malcontent matriarch of the family, full of rage, lust, fear, sadness and countless other emotions. It’s a perfectly serviceable comedy, a bit more palatable for general audiences than the original film, and just different enough to justify its existence.