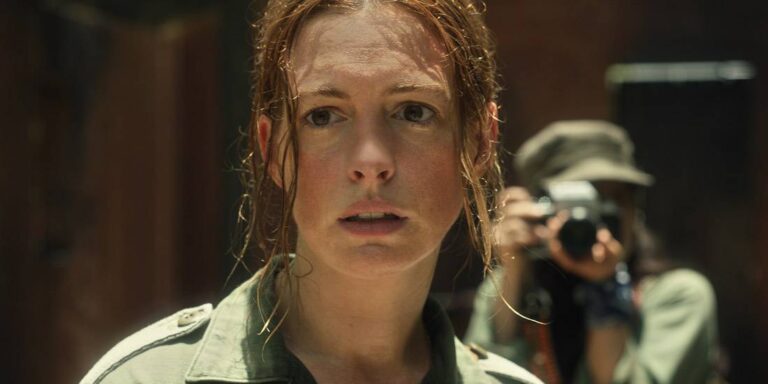 Three years ago, Dees Rees wowed audiences at the Sundance Film Festival with Mudbound, a haunting examination of racial and familial relations in the 1940s Deep South. This year, Rees is back on the snowy slopes of Park City with another period piece, The Last Thing He Wanted, which premiered at Sundance last night. Based on the Joan Didion novel of the same name and featuring an impressive roster of talented performers, Rees’ highly anticipated follow-up to the critically acclaimed Mudbound is, regrettably, an incoherent mess that’s nothing short of disastrous.

We first meet hard-edged journalist Elena McMahon (Anne Hathaway) in 1982 El Salvador, reporting on war atrocities with her stalwart companion and photographer (Rosie Perez). A narrow brush with death forces them to flee the country, and two years later, Elena is dismayed when her editor shuts down all stories related to the goings-on in Central America, sending her out on the campaign trail to cover Reagan’s bid for re-election. Writing up poll numbers isn’t exactly Elena’s cup of tea, but her proximity to Washington bigwigs allows her to keep digging into the circumstances surrounding Army surplus weapons landing in the hands of Contra fighters in Nicaragua.

Just as Elena begins to tug on that thread, her estranged father Dick (Willem Dafoe) pops back into her life, health rapidly declining and clearly suffering the early effects of dementia. Dick beseeches Elena to see his latest business deal through to completion, lest he find himself in debt to shadowy underworld figures, and despite Elena’s deeply felt resentment toward her father, which the film makes abundantly clear, she agrees to go along with the scheme. Turns out, Dick is a gun-runner, and he’s chartered a cargo plane to transport a huge shipment of — you guessed it — Army surplus weapons to his buyers in Central America.

Thanks to its over-reliance on massive exposition dumps (most of them courtesy of Perez’s character, whose primary function seems to be helping the audience play catch-up) and voiceover narration, presumably lifted straight from Didion’s novel but completely missing the mark as an effective storytelling device, The Last Thing He Wanted is incredibly difficult to follow. The rapid pace of its dialogue all but ensures important details will be missed by the audience, and the editing — jarring throughout the entire two-hour running time — make it feels as though massive chunks of the narrative were left on the cutting room floor. Characters flit from scene to scene, sometimes disappearing completely for large sections of time before popping back up with no explanation for their absence, which makes the film feel more like a series of vignettes, with no real connective tissue to drive the story forward.

The Last Thing He Wanted becomes even more obtuse with the introduction of multiple new characters, including Jones (Edi Gathegi), the weapons buyer who Elena can’t peg for an enemy or ally; the flamboyant proprietor of a seaside resort, played with a mischievous grin by Toby Jones; and Treat Morrison (a sleepwalking Ben Affleck), the shadowy government agent with ties to high-ranking officials in Washington. Morrison is clearly meant to be a pivotal character, but the role is so thinly written and Affleck’s performance is so detached that it’s genuinely baffling when Elena goes to bed with him, despite being fully aware of his connection to corrupt DC figures with whom Elena has already clashed on more than one occasion. That Hathaway and Affleck exhibit zero onscreen chemistry only adds to the confusion, but precious little else makes sense here, so I suppose that’s par for the course.

Rees deserves credit for once again nailing the period settings and costumes, and there’s very little about the film that doesn’t look great, but narratively The Last Thing He Wanted is a failure at every level. Perhaps a longer running time and a more measured pace might have resulted in something a bit closer to coherence, but as it stands, it’s my biggest disappointment of this year’s Sundance festival, and a film that couldn’t possibly be more aptly titled.