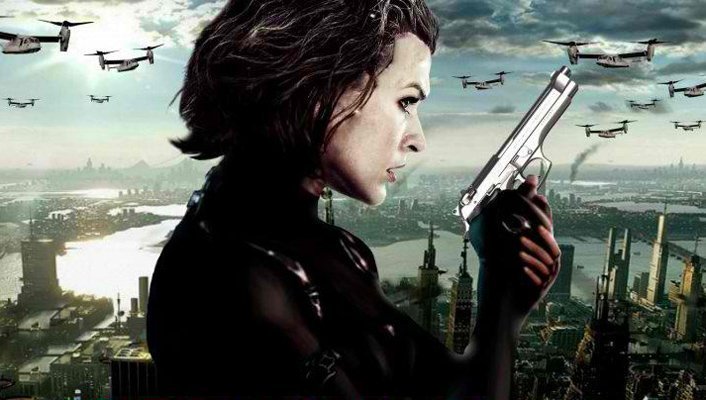 In which I praise the heroic women in film and other funtime media.

Since the dawn of film, women have played an inspiring role in entertainment. They’ve given us political hope by crossing social boundaries on film that it took decades for the powers-that-be to recognize in a court of law. Women have punched zombies in the face, gone drink-for-drink with burly thugs, and proven time and time again that for every Stallone, there’s a Hamilton out there loading a forty-millimeter grenade into a tube, ready to blast the shit out of a metal monstrosity. So this top ten list is written in celebration of those women. Without them, action films would just be Bruce Willis looking smug for 90 minutes.

Played by Juliette Lewis, Kate Fuller knows that you can’t just kill a psycho with a bunch of crosses, holy water, and sunlight. She doesn’t give a fuck how crazy they are. This cult classic directed by Robert Rodriguez made Kate out to be one of the sole survivors of a bloodbath that Quentin Tarantino couldn’t even keep himself alive through – and he wrote the damned thing. While the premise was ridiculous and awesome, she held her own and helped George Clooney’s character slay more vampires than a Buffy Summers wet dream. For extra chuckles, pretend she plays the same character 20 years later in Due Date opposite Robert Downey Jr and Zack Galifianakis. No wonder she’s so baked.

The Phantom Assassin in the Hyper-popular map Defense of the Ancients for Warcraft 3 is the Staples™ “That Was Easy” button for players who know enough of the game to not have racial slurs thrown at them every 20 seconds for sucking.  The wealth of neat-o powers at your disposal when you play as the P.A. lands her on this list, especially because after over a decade people are still playing her character obsessively and heavily. Now drop that bag of cheetos and can of Mountain Dew and keep reading.

Lara Croft was one of the first inspirational female characters in the video game industry. Disproportional… um… assets aside, she Raids Tombs like a counterpart to Indiana Jones in the modern age. Introduced to the world by Eidos and Core Design in 1996, she’s handy with guns and explosives, has razor sharp wit, and gave girl gamers a female character who wasn’t constantly in need of a man to help her save the day. Now if only she would grab onto that fucking ledge I’ve been trying to leap to for 90 minutes.

Chuck was a show on NBC for 5 badass seasons that gave us Yvonne Strahovski’s stardom. She plays a spy on the show who has to hold the main character’s hand in order to save him every goddamn week from a bad guy who is trying to capture the clandestine computer program he accidentally uploaded to his brain. Sarah Walker spends every episode kicking major ass without the help of imaginary sci fi gadgets. Oh, to be Zachary Levi.

When we first meet Marion, portrayed by Karen Allen, she’s challenging some goons in a bar to a game of “who can handle their liquor.” She wins and goes on to be Indiana Jones’ main squeeze and action shooty-shooty compadre. She deserves to be on this list because she exudes confidence and shows us that she can dish it out to the baddies during the times that Indiana belongs in a museum.

I hate to put another Tarantino character on here, but Uma Thurman’s role in Kill Bill deserves major applause. She may just be searching for revenge and trying to get her daughter back, but she kills a LOT of people in the process. She punches her way out of an early grave, figuratively and literally. I’ve never seen so many people cut to bits with a katana’s blade before. I may never again.

Say what you will about the movies not being exact copies of the games (who wants that anyway?), but Milla Jovovich’s character in the Resident Evil flicks kicks serious backside. She goes from just a bizarre lab experiment in a horror film to someone who destroys things with her mind and stops a multinational corporation run by major douchebags in their tracks at every step. See her in Resident Evil: Retribution on September 14th and then go home and be sad that you can’t be her sidekick.

River Tam, played by Summer Glau, spends the vast majority of her time on screen a psychological mess. The problem for the vile things in the ‘verse is that when she stops doing that, she enters a state of brutal, ass-kicking clarity and kills everything creepy in the room around her. If that means Malcolm Reynolds (Nathan Fillion) gets his gorram butt kicked here and there, then so be it.

Sigourney Weaver’s Ripley is one of the strongest women ever portrayed on film. Her fear makes her human, but she sets it aside to get the job done. And the job is setting Xenomorphs on fire. Ripley goes womano-a-womano with a Queen Alien in the second installment of the series and gives us one of the most iconic scenes ever filmed. I still maintain that she only needed the powerlifter suit to punch the thing in the skull because she was still a little tired from being cryogenically frozen for 5 decades. Regardless, if you have a long whip tail and oddly phallic head, I’d… well… stay away from her. You bitch.

And last but nowhere NEAR least, our number one lady. Linda Hamilton’s portrayal of Sarah Connor was so perfect in every film she was present for, and kudos to Lena Heady for doing an excellent job portraying the character on the TV series. Everything she does is to protect her son and ensure the future of the human race. Yeah. Read that again. The entire species, you asshole. She takes on two Terminators and would have killed all of the rest of them if cancer hadn’t claimed the character’s life between Terminator 2 and that awful sequel with the smoking hot female Terminator. If you don’t agree with this woman being the absolute numero-uno female badass in any form of entertainment ever, please jump into a vat of molten metal without giving me a thumbs up.

So there you have it. These women inspire, they enthrall, and they do it while beating the snot out of stuff for our entertainment. Here’s to another hundred years of it, ladies.