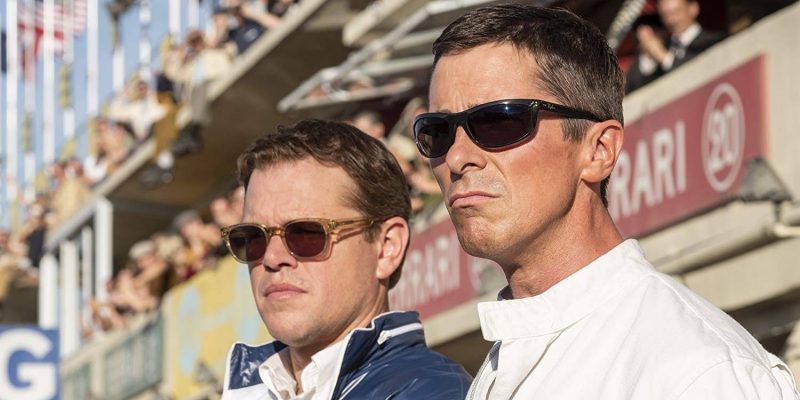 After shaking up the superhero status quo with 2017’s violent and visceral neo-Western Logan, director James Mangold is back with something a bit more by the numbers but no less entertaining, recounting one of the most storied conflicts in the history of the auto racing world: the Ford Motor Company’s quest to unseat Enzo Ferrari at the 24 Hours of Le Mans. And although Ford v Ferrari slots neatly into the biopic formula, that’s not necessarily a bad thing, as Mangold wisely chooses to focus not on the titular rivalry, but on legendary racing personalities Carroll Shelby (Matt Damon) and Ken Miles (Christian Bale).

When we first meet Shelby, he’s daydreaming about his own win at Le Mans in 1959, the highlight of a racing career that was cut short due to health complications. Now he spends his day designing custom automobiles and sponsoring a racing team headed by the hot-tempered Miles, a British WWII veteran with a sharp tongue and a short fuse. When he’s not zipping around the track and barking at other racers — “learn to drive, you pillock!” he bellows in one early sequence — Miles works as a mechanic and looks after his wife Millie (Caitriona Balfe) and son Peter (Noah Jupe).

Elsewhere, rumors are swirling that Ferrari is on the verge of bankruptcy, and enterprising Ford marketing exec Lee Iacocca (Jon Bernthal) comes up with a plan to buy out the Italian manufacturer. The radical idea gets the stamp of approval from “the Deuce” himself, Henry Ford II (Tracy Letts), but when Iacocca and his team arrive to hammer out the particulars, old man Enzo (Remo Girone) cuts off negotiations after learning he won’t retain control of the racing division. He sends Iacocca back to the US with a tirade of insults about Ford’s “ugly little cars,” prompting the Deuce to change tactics: if he can’t buy the Ferrari name, then he’ll build a car that will bury the competition and make the name worthless.

That’s where Shelby and Miles enter the fray, tasked with creating a prototype vehicle that can blow Ferrari’s drivers off the track at Le Mans. They’re given a stack of money and a 90-day deadline to get the job done, and as the big day draws closer, Shelby is keenly aware just how razor-thin their chances are — and that’s before marketing VP Leo Beebe (a delightfully slimy Josh Lucas) decrees that Miles will not be permitted to compete in the race, due to concerns about his volatile personality. “Put a Ford-type driver in the Ford car,” he orders Shelby. “That’s the Ford way.”

Predictably, the “Ford way” leads to an embarrassing ass-kicking of epic proportions, and it’s back to the drawing board for Shelby and Miles. This time, they’ve got a full year to iterate on their design and work out the problems, and Shelby is granted unilateral control of the project to ensure the events of the previous race don’t repeat themselves. Conflict brews all around as Shelby combats the encroaching corporate environment and his somewhat contentious relationship with Miles, and Mangold expertly milks this discord for every ounce of tension and even a bit of well-placed humor (a fistfight on Miles’ front lawn is particularly amusing).

Frequently clad in blue jeans and cowboy hat and rarely seen without chewing gum, Damon makes great use of some good ol’ boy Texas swagger throughout Ford v Ferrari, portraying Shelby (quite accurately) as a wry-humored, larger than life personality. He cuts an imposing figure when necessary, yet never feels less than charming, even when he’s on the verge of coming to blows with his corporate rivals. Shedding the excess weight he picked up for last year’s Vice, Bale takes some liberties with his approach — by all accounts, the real-life Miles was cordial and well-liked, far from the cantankerous character shown here — and will likely earn himself a slew of well-deserved award nominations in the coming months. Ray McKinnon also shines as Shelby’s long-suffering right-hand man, engineer Phil Remington, who tries his damndest to keep all the machismo in check.

Mangold does an excellent job with the staging of the race sequences, especially during the film’s third act, which centers on the 1966 race at Le Mans. Conveying the exhilaration of being behind the wheel, the slow creep of fatigue as day bleeds into night and back again, and the behind-the-scenes machinations that threaten to derail it all, the director serves up thrills, disappointments, and injustice in fairly equal measure, putting audiences through the emotional wringer as the climactic moments arrive. Despite its 152-minute runtime, Ford v Ferrari positively flies by, breaking free of its standard biopic trappings to emerge as a turbocharged, grade-A crowd pleaser.