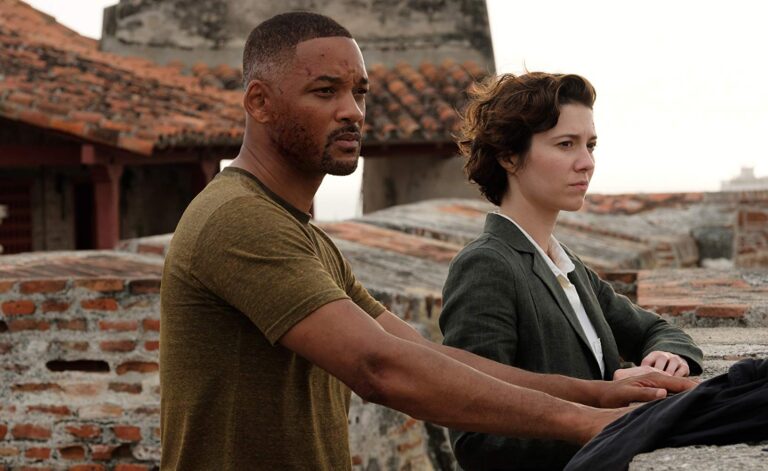 Much of the buzz surrounding Ang Lee’s Gemini Man has focused on the revolutionary new technology that allows for Will Smith to face off against a 23-year-old version of himself. Rather than taking the Marvel Studios route of digitally de-aging Smith to create the character, Lee has opted for something far more ambitious, combining state of the art effects to create a wholly digital construct layered atop Smith’s motion-capture performance.

Conceptually, this isn’t exactly a new idea — similar methods were used to turn Andy Serkis into Caesar, the protagonist of the recent Planet of the Apes trilogy. But whereas those films were employing motion capture in service of imbuing a primate with decidedly human emotions and mannerisms, Gemini Man is leveraging the technology to create a human being — and a highly recognizable one, at that. The vast majority of moviegoing audiences will easily be able to recall what Smith looked like in his mid-20s (thanks to episodes of Fresh Prince of Bel-Air in near-constant syndication), so in order to buy into the reality of Lee’s film, the effect would need to be pretty damn convincing.

Truth be told, it’s all that and more — Lee and the rest of the team behind Gemini Man have accomplished something truly awe-inspiring with the creation of Junior, a character so lifelike that you would almost swear the filmmakers had plucked the real 23-year-old Will Smith out of the past and inserted him into the film. I say “almost” because there are a handful — a very small handful — of moments where the effect doesn’t quite work. Junior is far more convincing during dimly lit conversations or cleverly designed action beats than he is during broad daylight, but when taking into account the experience as a whole, it’s impossible not to be impressed with the digital artistry on display.

It feels particularly disappointing, then, that such a magnificent technological showcase exists in a film that’s so mediocre. Smith plays Henry Brogan, a 51-year-old sniper with upwards of 70 kills under his belt, who plans to hang up his spurs after finishing one final job. But when Brogan’s known associates start turning up dead and he discovers his last target wasn’t a notorious bio-terrorist after all, he goes on the run, enlisting the help of a Defense Intelligence Agency operative (Mary Elizabeth Winstead) to root out the truth.

That truth puts Brogan on a collision course with Clay Verris (Clive Owen, sneering and sinister), leader of a privatized paramilitary outfit called Gemini, who also happens to be Henry’s former commanding officer. It seems Verris recognized his protege’s unique gifts very early, but was unimpressed with his weaknesses (free will, a conscience, etc), so he took the natural step of stealing Brogan’s DNA and creating a clone that he could train to be a more “optimal” version — all of the lethality, none of the humanity. And what better way for Junior to prove himself than by dispatching ands replacing the original version of Brogan?

It’s a ludicrous premise that only gets more ridiculous as the film goes on, but does pave the way for some enjoyable action setpieces, such as an exhilarating motorcyle chase through the crowded streets of Cartagena or a brutal hand-to-hand bout in the catacombs below Budapest. Gemini Man is fairly engaging as long as it remains in motion, but whenever its characters stop punching, kicking and shooting long enough to have a conversation, the inane dialogue and nonstop exposition brings the film to a screeching halt.

Smith’s usual charm is nowhere to be found here, and the world-weary stoicism he applies to Brogan feels neither authentic nor genuine. It’s a poor match for Owen’s performance, which quickly devolves into pure mustache-twirling territory as he barks orders at Junior, threatens government agents and froths at his former subordinate. Winstead, thankfully, isn’t relegated to damsel territory here, and seems to be having a blast doling out her fair share of ass-kicking, but even she is unable to escape Gemini Man‘s persistent blandness. Ultimately, the film makes for an impressive coming-out party for an exciting piece of tech, one that could have fascinating applications in the coming years, but offers precious little else.