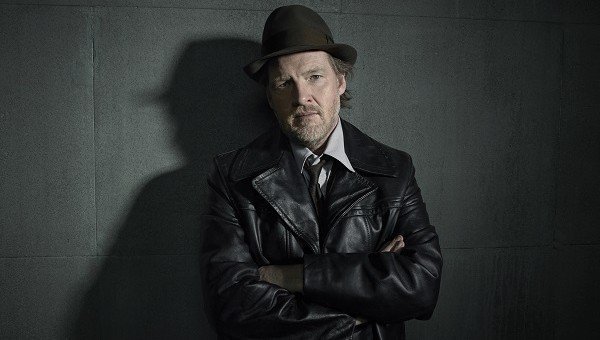 Donal Logue is a good friend to The Nerd Repository, currently starring in the hit WBTV-produced Batman prequel-drama Gotham as Detective Harvey Bullock. One of the most recognizable character actors in television and film, Logue has starred in numerous productions from Grounded for Life to more dramatic fare like History’s Vikings and Sons of Anarchy.

In part one of our exclusive interview, Logue talks about the hype leading up to the debut of the highly anticipated Gotham, cultivating relationships with co-star Ben McKenzie, and some early criticisms about villain overload. Beware of mild spoilers below, and be sure to check back next week for part two.

First I just want to say I’m going to miss you on History’s Vikings next season. King Horik was awesome.

Oh, thank you. I miss Vikings. I love those people.

Is it going to be weird watching Season 3 as a viewer and not part of the cast?

I think it’ll be exciting. I knew I was coming on at the end of Season 1, so it was fun watching the show. I’m just a fan of it and I’m a huge fan of Michael Hirst [Vikings’ showrunner] and I’m just excited to watch. And of course I got close to everyone that was coming in – Alexander Ludwig, the old guard and the new guard. I was there for the bridge. It’ll be fun to watch where it goes. The word I get from the set is that it’s bigger, crazier. It’s on overdrive.

I want to get into Gotham, because I’m really enjoying your portrayal of Harvey Bullock. He’s not your stereotypical crooked cop. He even has some really funny lines to deliver at times. Was that part of your approach to the role?

I know that was part of what Bruno Heller [Gotham’s showrunner] wanted. It was certainly part of my approach. I do think that sometimes if it is a cardboard cutout, if it’s just that grumpy, curmudgeon-y… you can’t go that far with it. If he becomes a one note guy – it’s been complicated, it’s been tricky. Part of what’s tricky is mixing that element of comedy and drama, and the second one is if he’s that stumbling and bumbling, then he’s not a legendary detective. That’s just in name. If he doesn’t show excellence at some point, in some way, then you haven’t earned much with Bullock.

And I do know for fact, that by the time you get to episodes 6, 7, and 8 you’re going to learn a lot more about his past and why he became who he became and why he’s at where he is at. He’s also in flux right now because I think Bullock, when you meet him, would have been perfectly happy to keep his side means going and just crawl towards retirement with a pension check and survive than get back into this big battle of good vs evil stuff.

He’s seeing a lot of do-gooders coming down the pipes, and he’s just watching them crash and burn. Then James Gordon shows up and he’s someone who is a different level of human being. He just has a different skill set. He’s kind of the varsity version of the do-gooders. It changes Bullock and it kind of reinvigorates something in him about who he used to be.

One of the neat parts of show is that dynamic between Bullock and Gordon. Your performances are really interesting to watch and if viewers don’t want to watch Gordon and Bullock, Gotham doesn’t work.  What was it like developing that rapport with Ben McKenzie?

You know our rapport happened very quickly. My sister worked with Ben on Southland and really liked him, and I was really predisposed to liking Ben to begin with. It was funny because years ago I remember watching Junebug, that my friend Phil Morrison directed, with Amy Adams and Ben was in that movie and I was like “Oh man, that’s that kid from The OC.” Yeah weirdly, I was like “I like this good, gritty really cool indie film.”

When I walked in, first of all, he confirmed every positive suspicion that I had about him when I first met him and we bonded immediately. We’re aware of that, too. We got each other. Even when you go through things like there’s a lot of pre-game hype for Gotham, obviously a lot of collective understanding of the world, that there’s going to be criticism that you can’t avoid sometimes. It’s kind of like I have a friend to walk through all that stuff with. So it operates both on and off camera.

He’s fantastic. First of all, he works really hard, he’s incredibly patient. So when stuff’s coming down and it could be hectic and overwhelming, he’s kind of like this beacon of calm and strength in the middle of the storm. Which is critical. If the stewardess is freaking out…”you’re the one that’s supposed to be calm in this situation!” When there’s turbulence, you want the pilot to say “Everything’s okay, we’re encountering a little bit of…” and he’s got that kind of strength about him and kindness and patience.

He has a lot of Gordon-esque qualities in him and he’s a go’er. He was a football player in high school in Texas, a student athlete, great with the action stuff. Throws himself in there and it’s great energy to be around. I got super lucky. They got really lucky. I know Ben would he say he got lucky and is so appreciative of it, but they really got the right guy for the part.

When the two of you are bickering back and forth onscreen it’s really fun to watch.

He’s the kind of guy that – we’re friends and I have full permission to do whatever I want and it’s not throwing him. And if it’s too much, we can pull back. But I don’t ever feel bitch-slapped by him by like “Oh, don’t do that.” We have a great partnership that way.

I have to say that lot of people, and they might not understand too, but when you do these kinds of jobs it’s interesting because sometimes it’s disastrous when they get a couple of people together to be partners. Sometimes they’re people who are not as giving or whatever, but it’s hard to be stuck with someone when you’re in that situation and they’re pretending to play friends or antagonists. You cannot be enemies with someone you are playing an enemy of. Just like Travis Fimmel [History’s Vikings], or Charlie Hunnam or Ron Perlman [Sons of Anarchy]. They’re all giving people, like “Go for it. Nothing’s throwing me and we’ll just try.”

You know, from an ego perspective you can’t be afraid to look foolish or fail in front of somebody like they’re judging you. You have to feel like you can try different things and vice versa. That’s what I love about really good people and good actors: that as human beings they’re kind of not overly judgmental. They’re the giving kind of people and so you know I have that friendship with Ben, regardless of the show. Like Michael Raymond-James [Terriers] who is always like a brother to me. It translates and makes the work life a hell of a lot richer and it helps the work.

I want to talk about the just released full season trailer from Gotham that revealed Victor Zsasz and a heavy Arkham focus. Will those both be part of a big arc coming up?

Zsasz comes in and… we’re filming episode 9 right now so the stuff that you get, I would say that full season tease kind of teases what we’re going to halfway through. Arkham definitely plays a really big part. But Zsasz comes in and I pray that Zsasz comes back, I love that guy. I love the actor [Anthony Carrigan] playing him and he was fun to have around.

I didn’t have really much to do with him in terms of scenes, but when I think about the days you pull – sometimes 15, 16 hours – you spend a lot of time with these people just talking and rapping, and [you have] mutual friends. I wouldn’t even call it a game, because you’re also establishing friendships with people you’re going to go in and do stuff in an arena where you can be potentially humiliated. So yeah, you make friends. But Arkham plays a heavy role, but so far I’m only privy to what’s up happened through episode 10.

What would you say to people that have complained about villain overload on the show?

You know, the thing about pilots are they rarely… everyone was just getting to know each other. One thing that was really odd to me was there was a lot of hype on the show obviously and when the pilot started, I remember day one people wanted to do a lot of behind the scenes interview and interviews of this type that we’re doing right now. They were like ‘What’s it like to do this and do that?’ I don’t know man, I’ve been here for four hours. You know?

I don’t mean to be a dick, but it’s so much nicer having the last few months under my belt and being able to talk about the world and really get to see it in a way that I can articulate, that I couldn’t when we started. Pilots are overloaded with a lot of… you forget that deeper seasons of The Sopranos, you know so much about these characters that so little needs to be said. So much shorthand goes so far. A look goes a long way. It’s loaded with all of that collective knowledge of the path of the characters.

I don’t mind any criticism, because you always look super defensive when you just go back on your heels and you can learn from criticism. But I think we had to establish how these different characters were connected in some way, and as the season progresses we can take more time with certain character arcs and not have to have everyone involved all the time.

We’re starting to get these new characters that are coming in – the Zsasz and Harvey Dents of the world. I think it’s getting kind of exciting. I didn’t know if it would be a real slow burn with all the villains, but from the collective decades of this world there’s so many people to explore that the well isn’t going to run dry.

Stay tuned next week for part two of our exclusive interview with Donal Logue, and be sure to catch Gotham Mondays at 8pm ET on Fox.