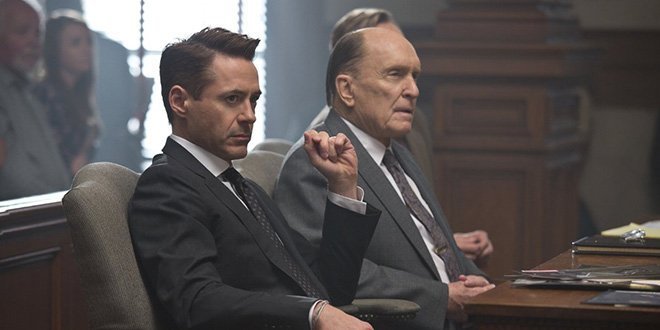 Since his first appearance as Tony Stark in 2008’s Iron Man, Robert Downey Jr. has enjoyed a seemingly never-ending parade of roles that have allowed him to basically portray an exaggerated version of himself. Whether it’s headlining the Sherlock Holmes franchise or popping in for a cameo in John Favreau’s Chef, we always get the sense that Downey isn’t so much acting as he is just channeling his innate charisma and energy into a different direction, and it becomes easy to forget that he’s an acclaimed performer with a couple of Oscar nominations under his belt.

If you’re looking to be reminded of Downey’s dramatic capabilities, then David Dobkin’s The Judge should do the trick nicely. Downey stars as Hank Palmer, a big shot defense attorney who measures success by the price of his car and the size of his house (and his paycheck, as he quips to a colleague “innocent people can’t afford me”). In denial about his crumbling marriage and barely able to connect with his daughter, Hank’s life is further complicated by a phone call from the small Indiana town where he grew up: his mom has just passed away.

Returning home for the funeral brings back plenty of memories, both good and bad, and reignites Hank’s conflicted relationship with his father (Robert Duvall), a well-respected judge with over 40 years of service on the bench. Judge Palmer has little respect for his son’s choice of career, and the two can barely manage to make eye contact when they’re in the same room together, let alone carry on a civil conversation.

That changes when Judge Palmer is arrested for his suspected involvement in a fatal hit-and-run accident, the victim of which has a past intricately linked to the entire Palmer clan. Hank immediately jumps to his father’s defense, a move that Judge Palmer reluctantly accepts when it becomes clear that his young, inexperienced defense attorney will get eaten alive by special prosecutor Dwight Dickham (Billy Bob Thornton), who intends to make an example out of the judge.

The sequences of events sets the stage for a riveting courtroom spectacle, and while The Judge delivers on that promise, it actually takes a backseat to the family drama that plays out in the foreground. Hank’s attempts to make peace with his father are merely a single piece of the puzzle, as he also struggles to connect with his brothers (Vincent D’Onofrio and Jeremy Strong) and finds himself drawn to the high school sweetheart (Vera Farmiga) that he left behind. While some of this material works very well, much of it feels extraneous and does little more than slow the pacing of the film.

The Judge also suffers from many of the tried and true clichés that plague films about disconnected families, but we’re willing to forgive those shortcomings thanks to the strength of the performances, particularly Downey and Duvall. While the script is surprisingly humorous and allows Downey to showcase some of the quick-witted cynicism that has become his trademark, the best moments come when he and Duvall are allowed to truly go at it. Years of anger and resentment manifest in every confrontation, bubbling up to the surface until the two actors are exchanging the the equivalent of verbal haymakers, each delivered with more force than the last.

At 141 minutes, The Judge overstays its welcome by about 20 minutes, made even more perplexing by the fact that the filmmakers chose to prattle onward well after a poignant moment that would have served as a much better ending than we were ultimately given. But truthfully, we don’t care that much, just like we don’t care about the confused, tangled mess of storylines that muddy the waters of the narrative. Those things aren’t nearly as important as watching Downey give his best dramatic performance in nearly a decade, or being reminded precisely why Duvall is one of the most enduring screen performers of all time.