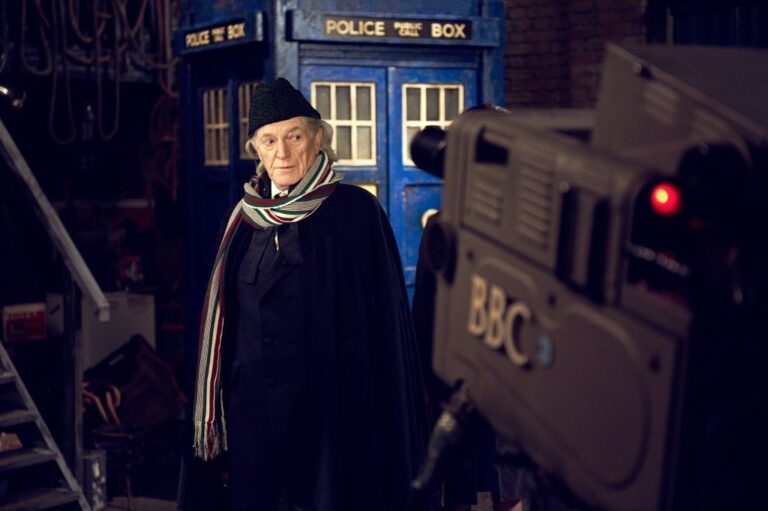 After months of hype and general revelry of all things Doctor Who, we finally come to the 50th Anniversary climax this weekend. Obviously fans are counting the minutes until the big Day of the Doctor premiere on Saturday, but Friday night brings audiences the other highly anticipated bit of original programming, with the debut of the film An Adventure in Space and Time. The feature is a dramatic biographical account of the man who started it all, the actor who portrayed the First Doctor, William Hartnell.

Written by Mark Gatiss, the film stars David Bradley as William Hartnell and over the summer I got to speak with both at San Diego Comic-Con about the feature. American audiences might recognize Bradley as Argus Filch from the Harry Potter franchise or the more recently notorious Walder Frey from Game of Thrones, best know as the scowling man responsible for the most talked about wedding of the year.

Mark Gatiss is no stranger to writing Doctor Who having written for both that show and Sherlock, but our audience will most likely recognize his face from on-screen as Mycroft Holmes, brother to Benedict Cumberbatch’s title character on Sherlock. Both men had great passion for William Hartnell and the Doctor Who mythos, so in celebration of the 50th Anniversary and the film’s debut here are some of the highlights of the conversation:

The resemblance between David Bradley and William Hartnell is uncanny. Was the casting the first thing you thought of for the project?

Mark Gatiss: No. I’ve had it in mind for a long time. I really genuinely tried to get [An Adventure in Space and Time] off the ground for the 40th Anniversary. Obviously the fact that Doctor Who has come back is what made the big difference. I think actually because David’s hair, we had to cut it, it usually is quite long, [the resemblance] was immediately striking. In one of the curious ways, I was watching [David] in something, I think it was Prick Up Your Ears, that was about ’87 wasn’t it? You have become much more likable. [laughs]

More than anything, because it’s not just about a look-a-like competition, David is one of our finest actors. I knew what David would bring to it, this sympathy of it. But a funny kind of parallel to Hartnell really is that David often plays nasty characters but I know he has a heart of gold. That to me is what makes the difference.

[David would] make a great Scrooge, I know that. That’s because like Alastair Sim, the person playing Scrooge fundamentally has to be lovely. You can’t cast a horrible person to play nasty, you can tell. I think you have to be a nice person to really play nasty.

Bill Hartnell is a very complicated man, but I knew what David would bring to it as, fundamentally, it’s a human interest story and hopefully you can watch without knowing anything about Doctor Who, because it’s about a man’s journey. Basically getting the best part of his career then because of his illness suddenly having to give it up. It’s about saying goodbye and nobody likes saying goodbye.

David, it’s funny seeing you sitting here smiling and laughing when last we saw you on Game of Thrones you were far

David Bradley: Well I bumped into a couple of The Starks here (Comic-Con 2013) last night at a party and said to them “Hello again! Any weddings coming up?” [laughs] Whether I’ll get the invite, I don’t know.

Were you a fan of Doctor Who prior to this or was this just simply a good part?

David Bradley: It’s just something I’ve grown up with. I’m young enough to remember William Hartnell, the first one. It was just something a bit spooky I’d watch on Saturday evenings before I went out. I’d never imagined for a moment it would last as long as it did, let alone that I’d be one day playing it.

It was long before I’d thought of becoming an actor. I’m constantly amazed at that thought. So I remember him, Patrick Traughton, Jon Pertwee, Tom Baker. It wasn’t like I never missed an episode but I kind of kept in touch with it or I was aware of it all of those years.

How do you approach playing a real person like Hartnell? Is it important to bring yourself into the role and avoid doing an impersonation of the subject?

He’s a very complex man and to bring out those complexities, his dark side, as well as his playfulness with the role. Apparently according to his former colleagues, and in an excellent biography written by his granddaughter Jessica Carney called Who’s There, he’s a great practical joker. He used to do impressions for the cast and it’s easy to forget that because we only see him as…

Mark Gatiss: He was a great comedian and farce player, wasn’t he?

David Bradley: Yeah, I read reviews of some of his theater work he did before…

Mark Gatiss: James Cagney was his great hero. [Hartnell] was quite a lot shorter than David, but there was something tenacious about him, like a jockey.

David Bradley: Well, he trained to be a jockey and did a bit of boxing. From such an unpromising start in life and being an illegitimate and having to hide that fact by claiming he was brought up in London in a peaceful Devon village on a farm because the stigma of illegitimacy at that time, 1900’s, was terrible.

[pullquote_right]The thing I keep stressing is that it’s a drama, not a documentary.[/pullquote_right]So one feels he kind of reinvented himself. Thankfully he had a mentor that supported him through drama school. Gave him a chance to get out of the life of street crime, which he was involved in when he was a teenager.

David Bradley: It could have gone either way…

Mark Gatiss: Yeah. He wrote this memoir in the third person of the life of a London street urchin, which is clearly him, and it’s fascinating. It’s written in this pigeon cockney dialect and he really was on the verge of becoming a criminal and then this man came and sort of changed his life.

Unfortunately, there was no room for any of that [in An Adventure in Space and Time], it was in some early drafts but the focus had to come down and down and down to essentially the four main players. The thing I keep stressing is that it’s a drama, not a documentary.

To support the film, there are lots of websites where you can see the fuller picture. William Hartnell is used to tell the story, and it’s mostly Bill’s story, so you don’t have to focus on Doctor Who. But it’s all fascinating.

How was it going back and revisiting those old Doctor Who episodes while researching this film?

Mark Gatiss: I watch them everyday! I was trying to capture Bill as I felt he was, which is not the Doctor, because it’s a great performance. He’s much more twinkly and he started to put, as his memory started to go, he start to put more and more business in there as he’s desperately trying to remember his lines. It was really funny. Carole Ann Ford said to me, because he’s very tactile, he used to almost crush her because actually, as well as effectually, he was thinking “Oh god, what’s the next line!”

I tried to get you this sense of his voice and there’s a particular kind of between the walls talk, which I think is very much influenced by American movies, he refers to Carole Anne as kid. “Sorry, kid.” It’s a very particular thing and I love all that.

There’s a lovely story where he’s moaning about something and then the producer said “I was just thinking, admiring that chair. John Barrymore used it.” [lowers voice to mimic Hartnell] “I saw him, you know.” “Really?” “Oh yes, yes. Many times.” “Did you?” Then they talked for half an hour about John Barrymore and then Shakespeare. The producer then says “Well, I’ll go sort that thing out.” Hartnell replies “Oh no no, it’s fine!”

That became sort of a coping mechanism. I think they all had to handle him with kid gloves.

David Bradley: But for me to find a way into it, you can’t just act in temporal grumpiness. You have to look for reasons to empathize in some way. For me, it came from that sense of deep insecurity from that upbringing we talked about before. That for me to find a way to, every time he flared up it was his insecurity from over the years coming back to him, it was useful to know his life beforehand.

Mark Gatiss: As David said though, he is the original. He established what we have today.

An Adventure in Space and Time premieres Friday, November 22nd  at 9:00pm ET/PT on BBC AMERICA.