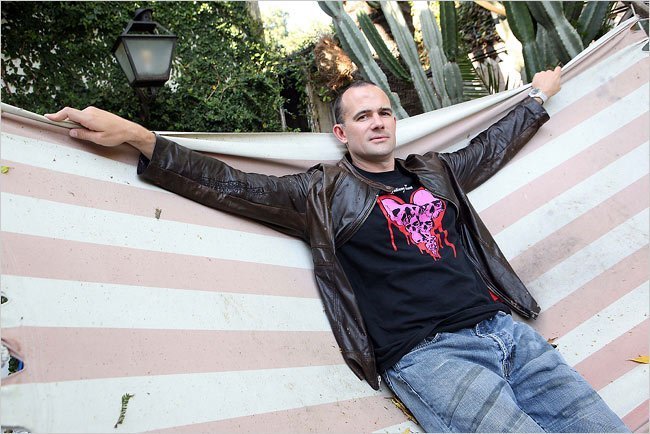 Cutting edge author Mark Z. Danielewski, known for House of Leaves and Only Revolutions, made an appearance during San Diego Comic-Con to promote the release of his latest project, The Fifty Year Sword, which will be available on October 16th. I was lucky enough to have an opportunity to chat with Danielewski about his latest project, as well as his sprawling follow-up.

“I feel like a tourist,” he replied, when asked about his first visit to Comic-Con. “A lot of people that I admire have talked about Comic-Con and have been coming here for over a decade. It’s a pleasure to be here, and it’s a strange way to be here, because I’m working. I don’t have the free time to float around and immerse myself… Hall H is like this hallowed place that I can’t go to, because there’s never enough time… but this is my first taste of it, and it’s great.”

Despite his inability to experience everything that Comic-Con had to offer, Danielewski’s enthusiasm and excitement for his upcoming projects wasn’t diminished in the slightest, especially with the North American release of The Fifty Year Sword looming on the horizon. The book had previously seen a limited release in Europe, and Danielewski explained what changes could be expected for the new edition.

“[The book was released] in 2005, and there were only 2000 English editions,” he says. “It had a different style, different format, and now I’ve reset the whole book. Instead of the dozen or so illustrations that were used in the Dutch version, there are over 80 illustrations that were created, using thread and paper. I, along with a few others, sewed [these illustrations], and we were all working madly to stitch butterflies and mountainscapes and forests.”

Danielewski is also hard at work on his next project, The Familiar, an ambitious tale that will be told in 27 volumes, nine of which had already been completed at the time of the interview. With publication still a few years away, the author was reluctant to divulge many details on the release format.

“I can’t really discuss it,” he says. “It’s still a few years out, and everything is shifting. How we distribute it will all be up to whatever technology platforms are available.”

Danielewski also avoided revealing too much about the plot, saying only that the project was “about a little girl and a cat… but obviously, since it’s 27 volumes, it’s about something more…”

Danielewski acknowledges that he has been approached many times over the years with offers to adapt his work into film, a notion which he’s always resisted in the past, but is gradually becoming more open to considering.

“Sometimes I’m tempted,” he admits. “Weirdly enough, the experience of seeing [my work] make its way into e-media kind of opened my mind a little more to the possibility, and I’ll say why. An e-book is a translation, it’s completely different. The House of Leaves experience on a Kindle or an iPad will be completely different from the book, because the typesetting will be different, the fonts, in many cases, are going to be different, so people are going to have a different experience.”

“Going to see a movie is the same thing,” he continues. “You just have a different experience. I’m still kind of resistant about the idea, especially with House of Leaves, because a lot of it is about casting, directing, and filming that narrative in your own head. Your own head is the theater in which you witness this movie about an endlessly dark house, so to create a movie that fixes [those images] I think does a disservice to the book. But we’ll see.”

The Fifty Year Sword will be released on October 16, 2012. Copies may be purchased from the Nerd Repository Store via the link below.