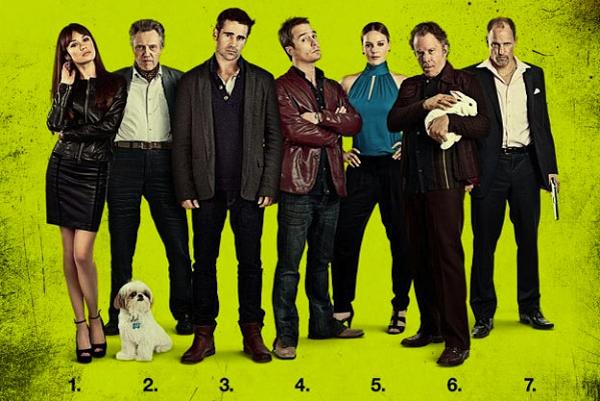 On paper, Seven Psychopaths looks like one of those fun, forgettable ensemble comedy caper flicks that come and go quickly from the public consciousness. It has a fantastic cast, a silly premise, and some genuine chuckle-inducing trailers, but instead what you end up with is all that you expected and so much more in a film that should put writer and director Martin McDonagh on the map as one of the best working creative talents in Hollywood.

The film revolves around a film writer named Marty (Colin Farrell) who is trying to write a screenplay also titled “Seven Psychopaths” with some help of his actor buddy Billy (Sam Rockwell). Billy’s other occupation is dog-thief, along with his accomplice Hans (Christopher Walken), and they specialize in kidnapping and returning the little guys for reward money. But when they nab the pooch of local big time gangster Charlie Costello (Woody Harrelson), the script Marty is writing and his relationship with Billy start to overlap and influence their very lives as they race toward the final act.

The most impressive thing that director Martin McDonagh pulls off with Seven Psychopaths is having this fantastic cast and actually using each one to their absolute fullest extent. So many films rely on star power to sell tickets but then don’t bother to actually do anything with their talent on the screen. But Rockwell gets to be cool, goofy, crazy, vulnerable, and all things he excels at in one role. Woody Harrelson is unremorseful, unhinged and yet somehow still hilarious and strangely likeable as the boorish mob boss psycho. But best of all is Christopher Walken (who deserves a supporting actor nom for this) because he is mesmerizing in this film with his comedic timing, the subtle facial expressions, the depths in his eyes when he’s not being funny – it’s all just absolutely fantastic in this one and you can’t take your eyes off him. Oh, and then there’s Tom Waits just being creepy and awesome in his minor but pivotal role.

But all of that wouldn’t amount to how great Seven Psychopaths turned out without the razor-sharp script that elevates this beyond just a fun film. The easiest comparison would be the Cohen Brothers Adaptation because of how the writing of a script in the story becomes almost a living thing, a character unto itself, that starts to reshape and redirect where the movie seems to be going. There are also numerous times the script pokes fun at itself, like when Hans comments on the lack of strongly written female characters in Marty’s (McDonagh’s?) film. Martin McDonagh’s grasp of dark humor is really something to behold as he can horrify you and then have you instantly laughing out loud a moment later. Most importantly, he takes all of the many branches of his story and wraps them up in an extremely satisfying and fitting conclusion. Minus a few nitpicks, like the oddly predictable revealing of who the actual “seven” are from the film’s title at certain moments throughout the movie, there is really not much to fault.

Seven Psychopaths has no lack of laughs, violence or guns but what it has that is surprising is the intelligence and charm at the center. Each character is a true-blue psychopath but yet we grow to actually like and empathize with these people in certain ways. Is that wrong? Are we crazy ourselves? The more likely explanation is that this is just a really great film. With its simple yet so complex premise, a cast at the top of their game, branching and interweaving storylines told with crisp, precise writing and direction from Martin McDonagh, Seven Psychopaths is a non-stop ball of a film.