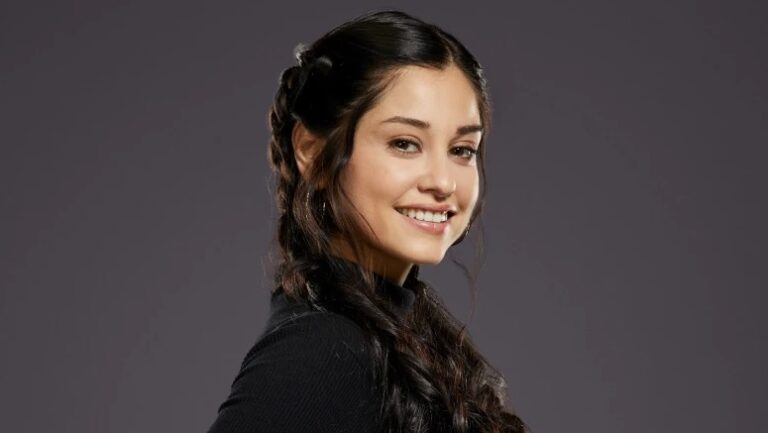 Yvette Monreal is honoring superheroes of the past as Yolanda Montez aka the second generation Wildcat on DC’s Stargirl. Season 3 premieres this week on The CW and sees Yolanda and the Justice Society of America (The JSA) making “Frenemies” with the remaining members of their arch-enemies the Injustice Sociey of America.

Yvette spoke with us one-on-one to give us the scoop on what to expect this season and what’s next for Yolanda.

What are you most excited for the viewers/fans to see this season?

I think for me personally, I’m most excited for people to see the physical aspect of Yolanda this season. She’s a little stronger, not as recoiled or meek as the seasons before because she was dealing with a lot of trauma in the past, but you’ll see her a lot stronger this season. And the fights are so fun.

DC’s Stargirl‘s subtitle for Season 3 is “Frenemies.” Do you, Yvette, have any frenemies?

[laughs] Yeah, I think so. One of those things where you know someone may not like you. You just kind of keep them at bay just to… yeah, I think everyone has one right? You keep things cordial just to not ruffle any feathers. But I’ve never had anyone super close to me that has been a “frenemy.” I think more high school stuff. That was more in the past for me.

Besides the aforementioned physicality, where would you say Yolanda is at emotionally and psychologically this season?

I think emotionally and psychologically she’s been able to get past the trauma and I think she’s a lot more protective this season. She really wants to prevent any mishaps, I don’t want to give too much away because it would be very easy for me to do that. She’s very protective of the JSA and we leave off with Meg [DeLacy]’s character Cindy wanting to join the JSA, so I have a lot of interactions with her. There’s also some judgments that I think have been passed on subconsciously from her family. But Yolanda is having a difficult time letting people in and she’s being very strong about her feelings towards her people.

What was it like getting to play opposite newly upped series regular Joel McHale as Sylvester Pemberton aka Starman this season?

Joel McHale is so fun to work with. He’s the funniest person I’ve met. He’s just a great guy. He’s alway on-book, he’s always throwing in little one-liner jokes in there. It was a fun process to be able to work with him. He’s very humble and grounded. It was a good time.

Did he ever make you break character with laughter?

[laughs] I think the group scenes, yeah. Everyone broke. I try not to break if it’s just us… You know what? Yes. He did make me break. There’s this diner scene, I don’t know if I can say that, but it’s just him and I and he was throwing the little jokes in there and it made me break. But once you hear it a couple times, you get used to it. The more I started to work with him, I was just like, “Okay, I’ve just got to prepare myself for it and think about something else.”

The coolest thing about being on a show like this is getting your own superhero costume. What is your favorite and least favorite thing about the Wildcat suit?

I think in the beginning it was really hard to put on. There is a lot of layers for my costume. Eventually it just became easier and fits like a glove now. I don’t think I hate anything about my costume. It’s the most comfortable, for sure. I really like the details. The little paws on my feet. A lot of people barely saw them until this season and its Season 3! People just didn’t realize that I had little paws on my feet. But that’s probably my favorite aspect and the little scratches on my suit are really fun too. Yeah, it’s really comfy and not that hot either.

Has there been an evolution to the suit over the seasons?

It is basically the same suit. They gave me another new suit that had a little bit more of a lighter tint on the chest area, a lighter blue, but other than that it’s exactly the same.

Part of the visual aesthetics that set DC’s Stargirl apart from the other Arrow-verse show’s is the on location filming in Georgia. What’s it like filming there and how do you spend your downtime?

It’s beautiful there, I love shooting on actual locations, but it’s such a small town that I think the people get a little upset because we’re blocking the streets and stuff like that. You have people on both side, there’s also people just spectating and standing around watching and taking pictures. But yeah, I love being on location and it’s such a cool feeling going back, especially now since we’ve done three seasons. It’s so nostalgic going back and I have really good feelings when I go. Then on my downtime I would say I just hang out with my castmates.

The bulk of my scenes are with Brec [Bassinger] and we spend a lot of time at “craftys” [Craft Services]. We love getting our apple cinnamon tea and she became a coffee drinker in Season 2 and 3, so we get a lot of that especially during the night shoots. There’s a lot of good snacks. Our catering and “crafty” people are the best. I would say my favorite snack there are the Gin Gins. The little ginger chews. Those are my favorites.

So yeah, we just eat and talk. I don’t know if you saw, Brec posted a little video of her [watch it here]. We had so much [downtime] one time, that she actually put on my costume and was walking around set. And we tried to show our showrunner [Geoff Johns] but he wasn’t there. But it was so cute. She fit it perfectly. I hope they write that in one day, where we get to switch suits. That would be fun.

What about you? Have you tried on any of the other costumes?

It was just her. I want to try on hers. I think we were just nervous that we were going to get called up to the set.

You didn’t want to be responsible for ripping or damaging the lead character’s suit.

Exactly. She can ruin mine all she wants. No, I’m just kidding.

Does weather play a major factor in the filming? Some of those night shoots seem like they could be quite cold and rough.

Oh, yeah. This season I don’t remember too much. The weather wasn’t that much of a problem. We kind of learned Season 2, we were freezing in episode 1. That alley scene where we come back. We were so cold that our showrunner had to call it early. We were all just shivering. They’ve been able to write it in. The whole weather changing in Season 2, we had to address it or at least mention it in the story because the weather was just so cold and it was always cloudy that they wrote the weather into the script. It wasn’t initially so much of thing, but it had to be at the end of the day. But Season 3 we’ve adjusted pretty well and weather wasn’t much of a problem.

Oh, you just reminded me. There was this one scene [for Season 3] where it was just pouring rain, pouring, pouring rain. It was on location and we had this house for a certain amount of days and we couldn’t get this shot outside. We did this one shot the first day we were there before it started pouring rain and I think that’s the shot that they’re using, so hopefully it looks good. So yeah, rain was an issue this one time on location. It was pretty cool.

Who would you like to see from the DC Comics catalog of characters to show up on DC’s Stargirl?

I’m a big fan of Shazam. So that would be cool to have him make a cameo. I’m such a fan of that movie. That would be pretty cool right?

It would be a good fit for this show, actually. Any of the Shazam family.

I mean think about it. He and Courtney Whitmore have a story arc. It wouldn’t be that off, if he made a little cameo or at least did a couple of episodes. That would be really cool.

Maybe WB can persuade Zachary Levi or cast their own version for DC’s Stargirl?

I would want the real deal. The movie version, Zachary Levi. I don’t like when there are multiple versions. Especially if it’s all in the same world. It’s all DC, right?

DC’S STARGIRL follows high school student Courtney Whitmore (Brec Bassinger) and her stepfather Pat Dugan (Luke Wilson) as she leads an unlikely group of young heroes ­— the Justice Society of America. The third season finds Starman (Joel McHale) back from the dead and offering to train Courtney while she helps him adjust to his new life in the quiet town of Blue Valley. But when there’s a murder that needs to be solved, the mystery will not only have our heroes questioning the former super-villains’ commitment to truly reforming, but lead Courtney, Pat and Starman to a secret that will shock them all to their very core.