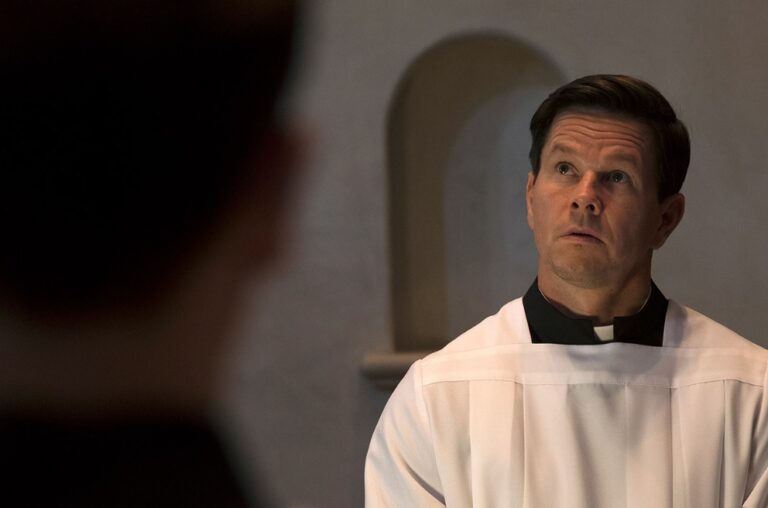 Father Stu, the inspirational and surprisingly funny film now in theatres, has been a long-term passion project for Academy Award nominee Mark Wahlberg. After six years of stalled development, Wahlberg decided to partially finance the story of Stuart Long, the washed up boxer/aspiring actor turned priest, out of his very own pocket to make the project finally come to fruition.

During the Father Stu press tour, Wahlberg made a stop in Phoenix to discuss the project with The Lamplight Review and a select few other local press outlets and you can read the highlights below:

On what changed most during the film’s lengthy development cycle:

Mark Wahlberg: I don’t think anything changed, it just kind of reaffirmed why I wanted to make it. I think I was surprised at how much “the powers that be” were at work. Everything that we needed to have come together, came together in the most beautiful and organic way possible. We always knew there was potential for a great movie there.

I think because of praying for Stu’s intercession and Mary’s and Jesus’ and knowing how important the movie was, in today’s time especially, that they just helped elevate everybody else’s performance, helped why they wanted to make the movie and, of course, having everything else fall into place getting a theatrical release from a major studio. But now it’s just confirming that I need to be doing more stuff like this, that really has substance and has an impact on people.

On the the worst part of the drastic weight gain required to portray Stuart Long as a boxer in the beginning of the film and the nearly immobile, ill priest in the final act:

Losing the weight is so much more easy. I can just say, “Okay, I’m not going to eat. I’m just going to drink water.” I’ll fill myself up with lots of water, sort of suppress my appetite a little bit.

Not fun and not really healthy at my age, but a huge, huge part of Stu’s story and his journey. Everything is predicated on his physicality and when he’s losing that, it’s his spirituality that’s his real strength… [that spirituality] blossomed and grew and really touched so many people that encountered Stu.

On the most important part of making a film like this:

Mark Wahlberg: I think just getting it right. Staying true to who Stu was. That’s why the R rating was so important. Stu had a very rough and difficult upbringing, very difficult time even trying to make it in the bizzes in Hollywood and he just wanted to be honest and raw.

I think that’s the thing that people appreciate most about the film. They know that they can see themselves in some sort of way, because we’re all struggling. We’ve all dealt with things that we didn’t expected we’d have to, especially now with Covid and everything. So to have a movie that is really touching people in a very personal, intimate ways is a very powerful thing.

On finding the right tone between the inspirational drama and humorous elements:

Mark Wahlberg: We always thought the best comparison tonally would be The Fighter. There’s this family, there’s lots of dysfunction but ultimately it’s this really inspiring story. I just wanted to push the envelope constantly. We were paying for this ourselves, we didn’t have anybody to answer to — studios, people with notes, other producers, things of that nature. I was always like, let’s just push the edge. I think the edgier it is, the more impactful when he dedicates and commits to serving God that will be, and you really see the change and know that he has changed. Even when faced with this adversity, with this terrible diagnosis.

We just wanted to keep it real. It’s that simple. And of course Rosie [director Rosalind Ross] was always trying to say, “Just tone it down a little bit. You don’t need that much edge when you’re talking to a 90-year-old gentleman in church.” [laughs]

On parallels between Stu’s journey and his own career path:

Mark Wahlberg: Well, how do I utilize all the of things that God has put in my life for His greater good and what the bigger picture plan is for me? Not to just keep making movies that make people laugh or escape for a while, that’s all fine and dandy, but there is definitely more important work to be done, recognizing what that is and going and making that happen.

And I have to really go back to accrediting everything, I certainly do with all of my personal and professional success, to my faith. I was able to find it earlier on and get a taste of that and I said that this was going to kind of be at the center of how I approach everything in life and Stu found that later on, but the power that Stu has is still something that inspires me to seek out and have more of that, because I’ve been a gradual work in progress. When he got hit with it…[makes whooshing noise]… he was glowing.

On whether any good moments with Stu didn’t make the final film:

Mark Wahlberg: Once he committed to going to the seminary after the accident, he figured he knew what his calling was. That was pretty much there. There were little bits and beats that might have come out, but there was so much fun with him pursuing his career in Hollywood. There were some great moments in there that will either be on the DVD extras or deleted scenes, but there’s this moment where he’s trying figure who it is he reminds himself more of: Charles Bronson or Burt Reynolds. It’s the first time he has the make-up on and he’s sitting in front of the mirror and he’s doing this bit and the make-up people are like, “What the heck is wrong with this guy?” Lots of funny moments like that.

On which of his previous characters could learn the most from Father Stu:

Mark Wahlberg: Oh gosh. I don’t know. I always think of John from Ted or Terry Hoitz from The Other Guys. The guys that need the most guidance. [laughs] They’re guys that mean well, they’re cool guys, you’d love to hang out with them but you definitely don’t want to take life advice or career advice from those guys.

On how the priests in his parish learned about Father Stu in order to bring the story to his attention:

Mak Wahlberg: Father O’Ryan didn’t know who he was or why Father Ed was pitching me. Both of us were just sitting there like, “Can we just order our pasta and salad and get out of here?” But Father Ed was friendly with Stu. They were kind of going to seminary around the same time. They were buddies getting in trouble and fights in L.A. and they both eventually gravitated towards the priesthood.

He really felt like this was a movie that I should be making. He told me about his trip to the theater to see The Fighter with Stu and his Dad and what a profound effect that movie had on them.

So he knew Stu’s story very well, but not a lot of other people did, but the people that he touched in the short amount of time he was a priest — it’s remarkable what high regard they hold him. I was just up in Helena, Montana showing them the film. It was overwhelming to see. Really special.