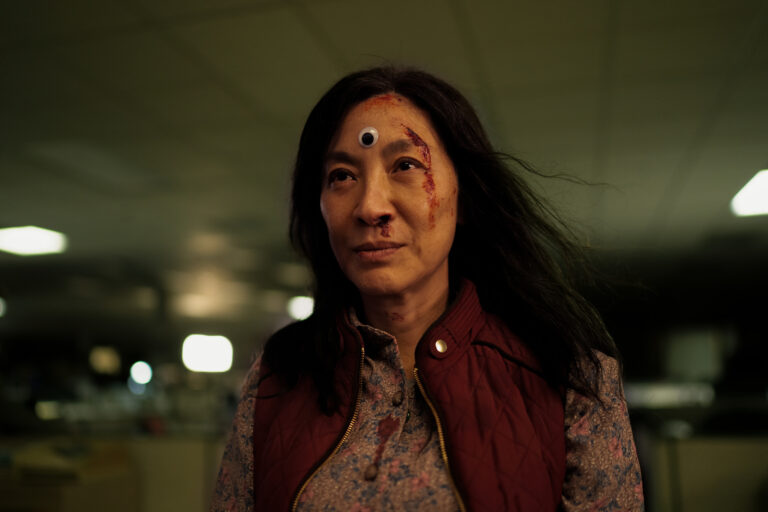 There’s probably nothing I could say about Everything Everywhere All at Once that hasn’t already been said by someone else, and the vast majority of those someone elses will no doubt have already said it better than I could ever hope to. So instead, I’ll just say this: every positive word you’ve heard about this latest offering from Daniel Kwan and Daniel Scheinert — known collectively as simply “Daniels” — is absolutely, unequivocally true. Full of heart and humor, wonder and whimsy, and a whole lot of ass-kicking courtesy of the incomparable Michelle Yeoh, Everything Everywhere All at Once is one of the most original, audacious and entertaining films I’ve ever been privileged enough to experience — it’s not only a masterpiece, it feels like a fucking miracle.

Evelyn Wang (Yeoh) is exhausted. Between the never-ending grind of operating a laundromat with her gentle, good-natured husband Waymond (Ke Huy Quan), caring for her ailing father (James Hong) and trying to keep her fraying relationship with daughter Joy (Stephanie Hsu) from unraveling completely, Evelyn can barely find the energy to blink, let alone throw herself into the arduous task of finishing her taxes. An ultimatum from a frumpy, overbearing IRS agent (Jamie Lee Curtis) might be the final push that sends Evelyn’s sanity into the abyss, and it’s precisely at that moment when Waymond pulls her into a broom closet and informs her that he’s not her husband — or more precisely, he’s a different version of Waymond, from a different universe.

It sounds bonkers, of course, but not as much as the next revelation: Waymond has been hopping through time and space, meeting different versions of Evelyn from other realities in hopes of finding the one true Evelyn, who can harness the power of her alternates to defeat an evil force hell-bent on unmaking existence. These are the sort of stakes typically reserved for studio tentpoles with unlimited budgets; Spider-Man: No Way Home and the upcoming Doctor Strange in the Multiverse of Madness are both mining similar territory, but you’d be hard-pressed to find a Marvel film where characters have hot dogs for appendages or where someone gets beaten to death with a pair of dildos.

That last bit may come across as crude and immature, but if you’ve seen 2016’s Swiss Army Man — the previous film by Daniels, which featured Paul Dano as a suicidal man who befriends a talking, farting corpse played by Daniel Radcliffe — you’ll know the duo is uniquely adept at wringing raw emotion from the most absurd scenarios. But Everything Everywhere All at Once is next-level stuff, the kind of mind-bending, genre-defying cinema that has become increasingly rare as Hollywood rests comfortably on its throne of brand recognition and IP-based entertainment. That’s not to say the directors are thumbing their noses at well-known franchises; on the contrary, they pay homage to everything from The Matrix to the Terminator series to Pixar’s Ratatouille, but Daniels combine their influences into a particular blend of batshit insanity the likes of which few would dare attempt, and even fewer would be able to pull off successfully.

Bold, innovative films of this ilk have grown increasingly scarce. Mad Max: Fury Road was the last one to knock my socks off in similar fashion and cause me to spend an excessive amount of time pondering how its creators managed to convince someone to bankroll something so bananas, and Everything Everywhere All at Once is cut from a similar cloth of fearlessness. Those that decry the decline of original filmmaking have zero excuses not to show up in droves for this film: come for Michelle Yeoh sticking googly eyes on her forehead and beating the hell out of bad guys with trophies jammed up their asses, but stay for the surprisingly effective emotional story at its core, about a woman who spent her whole life wishing she’d made different choices finding peace with her place in the universe(s).